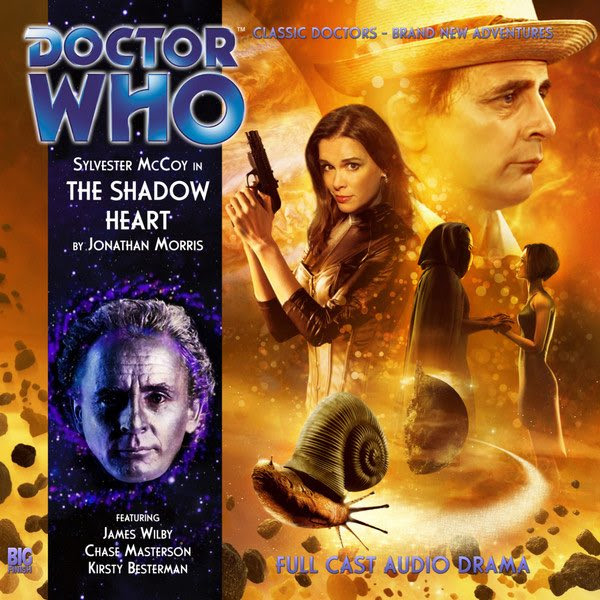 The trilogy of Doctor Who audio plays that began with the Fifth Doctor story, The Burning Prince, and continued with the Sixth Doctor story, The Acheron Pulse, concludes with a Seventh Doctor story called The Shadow Heart. The story of Prince Kylo (James Wilby) and his doomed love for the Princess Aliona concludes here though the audio play spends less time with that than it does with a very clever and amusing time travel plot.

It begins with the Seventh Doctor (Sylvester McCoy) stumbling into a bar with a massive gunshot in his chest, seeking the assistance of a couple "snailers"--scavengers who pilot a large space snail through debris fields looking for valuable salvage. We learn the Doctor is being pursued by The Wrath, a dangerous robotic civilisation that the Sixth Doctor reprogrammed in the previous story to devote all their energies to justice. Unfortunately, this has led the Wrath on a campaign to kill everyone because, as the older and wiser Seventh Doctor realises, deep down, "Everyone's guilty of something." I would have liked a greater exploration of this contrast between Six and Seven--it makes a lot of sense. I always thought the darker, more mysterious personality of the Seventh Doctor was related to Six's final story being The Trial of a Time Lord--with the confrontation with the Valeyard teaching the Doctor the dangers of a simplistic, zero tolerance morality. But maybe there's something like that in an audio play I haven't listened to yet.

Since Seven seems to know everyone and even what's going to happen, it becomes clear that he's folded back on his own timeline. I wondered if we were going to get the second half, from the Doctor's perspective, of the story first and the first part second but writer Jonathan Morris has something even more complicated in mind. There are one or two places where I thought Morris lost track of what he was doing but mostly it's a pretty solid construction of . . . well, it's like, Doctor B remembers what Doctor A did who followed from Doctor C, who was instructed by Doctor B, operating on instructions A gave to his cohorts . . . Anyway, it's really good. Mostly the story follows the perspective of the supporting characters, one of whom is an American bounty hunter played by Deep Space Nine's Chase Masterson. Keeping it from the perspective of the supporting characters adds to the feeling that the Doctor is executing an extremely complicated plan though, as he admits, he loses track himself now and then.