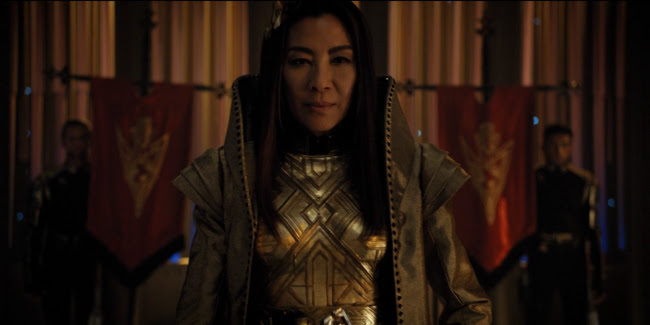 So what did we discover this week on Star Trek: Discovery? Most viewers discovered they were right about a plot twist finally delivered in "Vaulting Ambition", one not quite as obvious as last week's, spotted only a mile away instead of twenty miles away. I liked this twist a lot better however many people saw it coming but this was another episode that had a lot of things that didn't make sense along with just plain bad dialogue.

Hey, threat ganglia, bet you didn't see that coming! Actually, I think we can conclude the threat ganglia are just generally useless. Saru's (Doug Jones) flared up for Burnham (Sonequa Martin-Green) in the turbolift but didn't pick up on Tyler (Shazad Latif) or even react during the whole surgery scene. 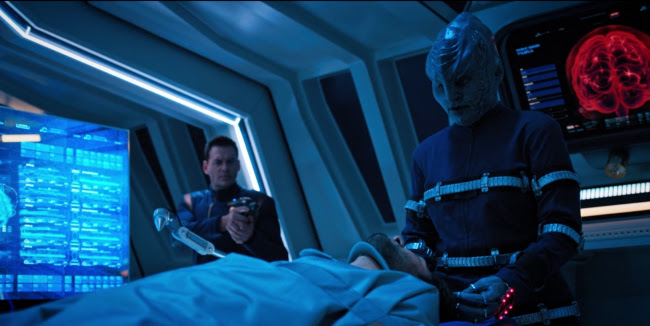 Maybe they were confused. That would be fair. What the hell is the story here? There was a real Tyler and he and Voq were fused together? What was the point of having them both played by the same actor? All that effort to hide the identity of the actor playing Voq and it was completely meaningless. We are watching people trying to repair a car as it rolls out of control downhill at increasing speed. 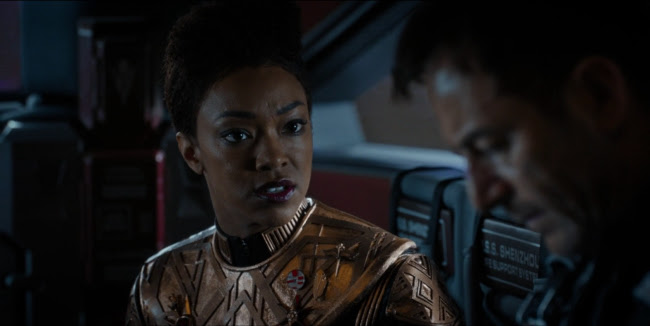 I think this is why Burnham is so boring. She was intended to be Bryan Fuller's avatar and without him around no-one knows what to do with her. I think Martin-Green is a good actress but so much for her poker face. 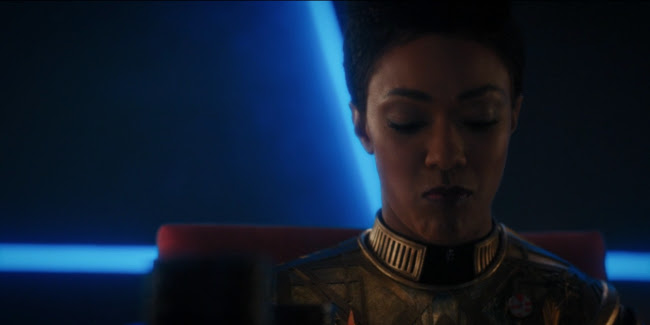 Although, as I said a couple weeks ago, I thought the fact that she didn't pick up on Lorca (Jason Isaacs) obviously diverting attention from the cause of their trip to the mirror universe made her seem a bit thick, I do think Jason Isaacs generally does manage a good poker face. He's the only actor on the show whose performance seems like he's been working with the same character from the beginning. I think that's entirely due to Isaacs' agility.

Who knows what the plan was at the beginning? Was he Section 31? Was he just plain duplicitous? His subtlety works for a lot of explanations. In any case, it's completely plausible that everyone around him thought he was just a bit of a bastard with nothing more sinister beyond that. He was my favourite character before but the last scene of this episode makes me like him even more. 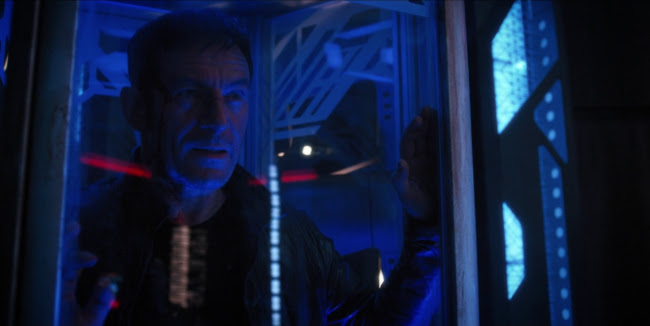 "You know how it is, someone better came along." Badass. Cruel, yes, but badass. What happens now? Burnham and Georgiou (Michelle Yeoh) team up against Lorca? 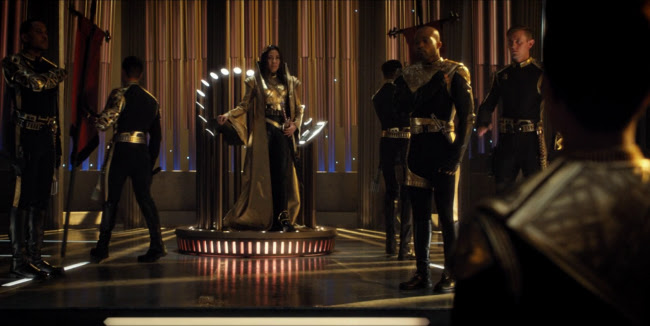 Michelle Yeoh is good in this episode but being the straight forward evil queen doesn't seem a terribly challenging role. Is Burnham going to convince her to stop her wicked ways or is Burnham going to compromise her morals to work with her? The former sounds ridiculously implausible and the latter sounds unsatisfying due to Burnham's lack of character development. But who knows, maybe Discovery will surprise us next week.

Posted by Setsuled at 12:56 PM
Email ThisBlogThis!Share to TwitterShare to FacebookShare to Pinterest