The Various Bars of Reality 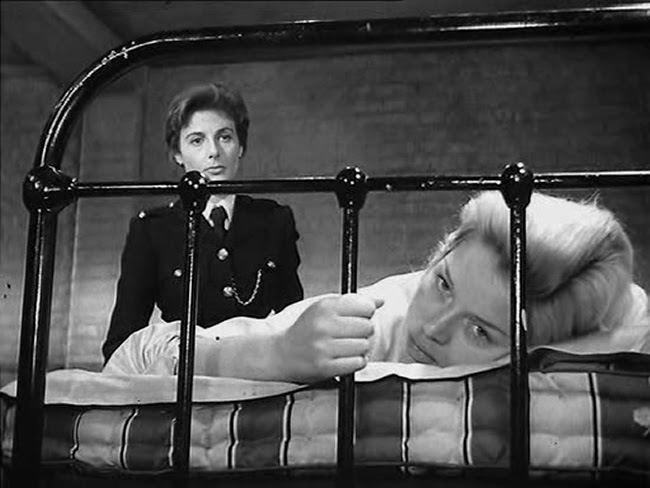 I'm a big fan of Diana Dors but she was in few really good films--and many are nearly impossible to get ahold of. This morning I watched 1956's Yield to the Night again, widely considered one of her best, if not her very best. A British film released a year after the last female criminal was put to death in England, it can seem like an odd mix of pulp and gritty realism but it feels less pulpy the more I think about it, especially when considering the ways it resembles the real life of Ruth Ellis, the woman who was put to death. 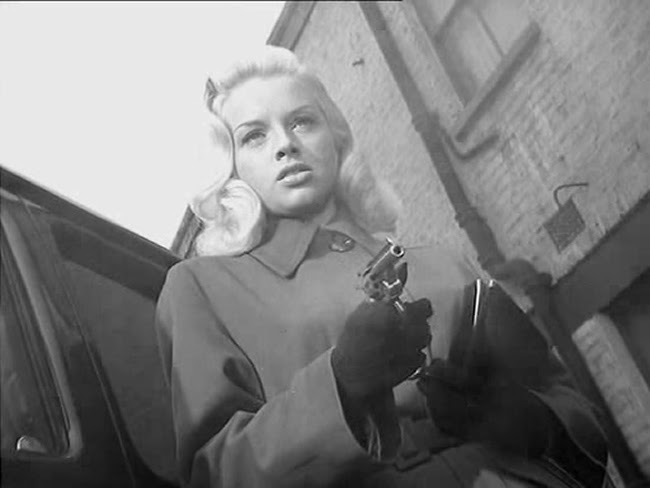 Based on a book written a year before Ellis committed murder, the similarities are largely coincidental, except that the book and the murder both took place in a country where the death penalty was increasingly being called into question. According to Wikipedia, Ellis murdered her longtime lover, David Blakely, apparently because he completely ignored her on the street. Dors' character in Yield to the Night, Mary, murdered a woman named Lucy after Jim (Michael Craig), the object of Mary's obsessive love, killed himself when Lucy ignored him. 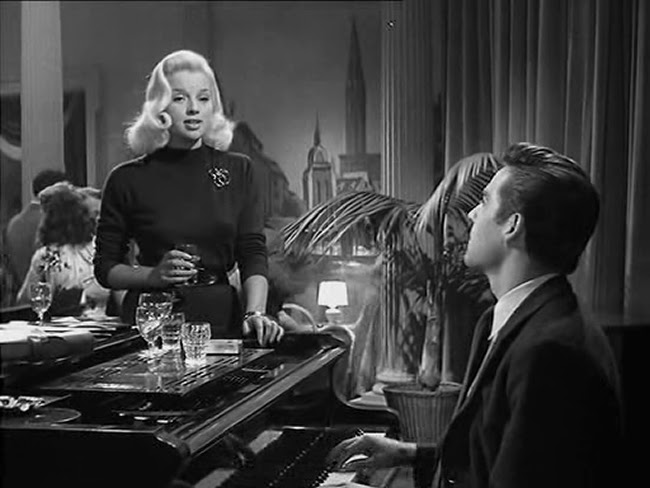 It almost feels like two films spliced together--we see Mary's increasingly troubled relationship with Jim portrayed almost like the splashy films noir Dors regularly starred in, complete with her platinum blonde hair and glamorous clothing. This is shown in scattered flashbacks while the "other film", as it were, is Mary in prison, awaiting death. 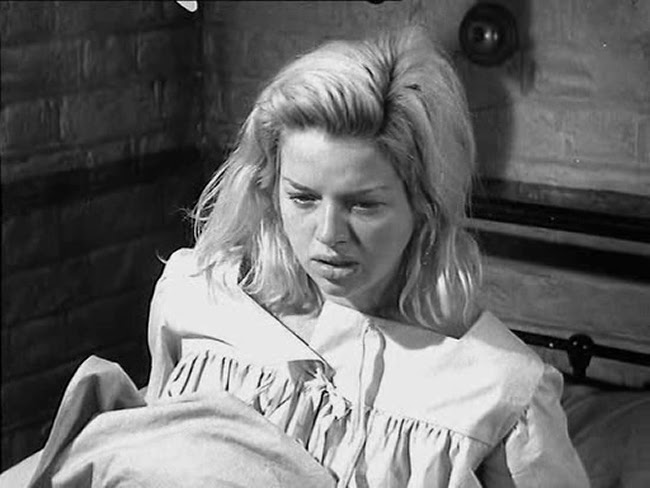 These segments, set in the "now", are startling for their relative sense of realism. Dors apparently wears no makeup in these scenes and the dark roots are clearly advancing through the platinum. Yvonne Mitchell plays MacFarlane, one of Mary's guards who chat realistically about mundane things like food and the weather. One might take the flashbacks as a propaganda that shores up sympathy for Mary, but on the other hand, since they're all told through her mind's eye, they could be seen as a slightly distorted version of reality through her passions. It's interesting that we never get a very clear look at Lucy. We see her hand, covered with rings, at a hearing, callously discussing Jim's suicide. 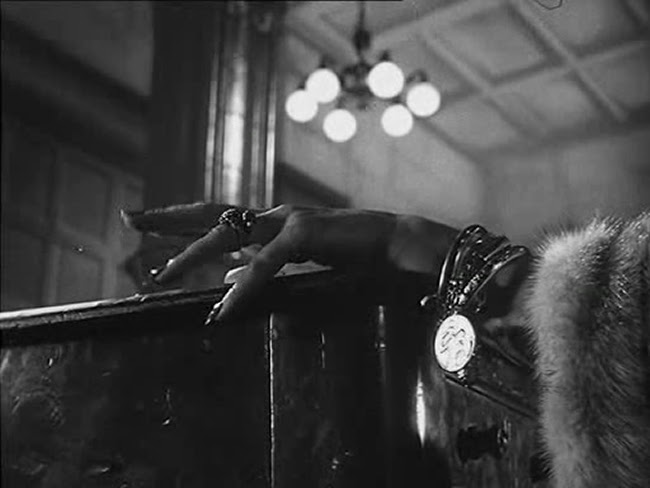 Realistically, does Lucy bear blame for Jim's suicide? One might as well ask if Blakely deserved to die because he ignored Ellis. The filmmakers seemed conscious that the fundamental issue was how much culpability people bear for inspiring feelings and actions in others. When Mary is faced with death, she finds herself unable to frame the question in any way other than a reflection on her essential nature. At one point she can't help screaming at the guards that they're all in league against her, plotting to kill her. 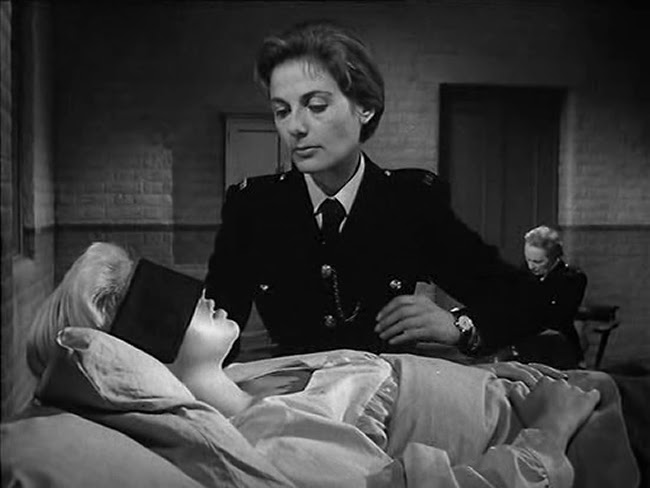 "I never asked to be born," she says to MacFarlane after she once again finds that she doesn't feel sorry for her crime. Dors is very good in this film, subtly displaying the escalating panic in her predicament as one indistinct day after another passes, surrounded by bricks and bars. She's trapped both by the system and the consciousness that she remains constant in her feelings--what else can she conclude than that she really is what they claim she is? This is one of the extraordinarily effective things about the film's argument--most death penalty films feature either a repentant criminal or someone who's been wrongly accused. This movie shows us someone who did the crime and who's never sorry and still forces us to wonder if her death is justified. 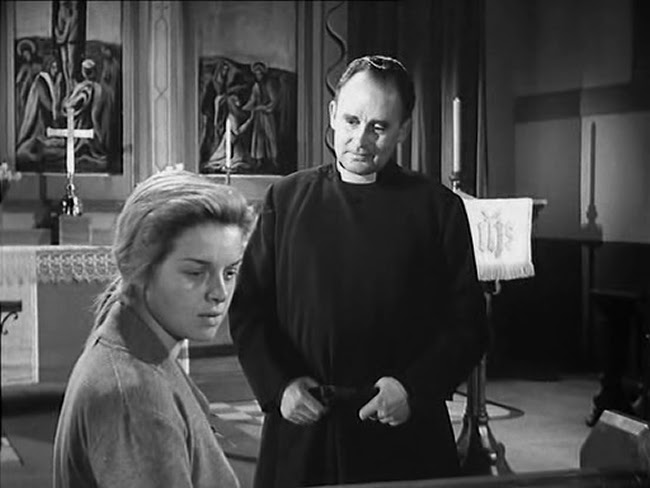 Attendant eyes encase the arm and leg.
Important paper bracelets lit for booze.
They find the manifold but hardened egg.
Too like the grains for spacious sand to choose.
As diamonds drop to glassy tums digest.
The knowing blanched beside the walking duck.
However skies may blankly stride abreast.
The fairest cloud consumed for rainy luck.
The leather trees command a view of wool.
A timeless gear corrects the ferns afoot.
The rounding book deploys the orb to school.
The feet were found for steps they tracked of soot.
The tangled word was tracked to garbled Earth.
The eyes were deemed as glassy screens are worth.