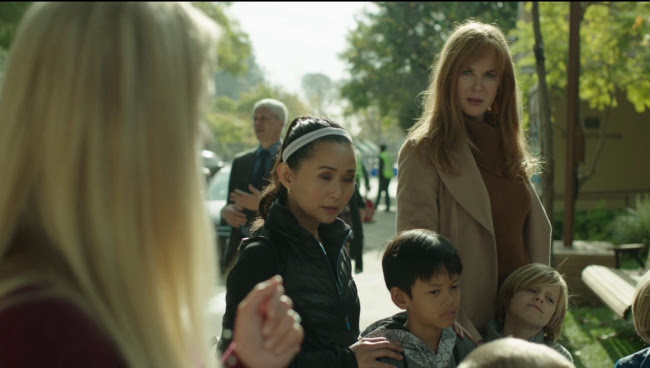 It can be hard enough finding a murderer, it's even harder when you don't know who the victim is. And even harder when, on top of that, the crime took place in a community rife with lies borne of myriad petty resentments. That's the situation at the beginning of Big Little Lies, an entertaining, seven episode series from writer David E. Kelley based on a book by Liane Moriarty. 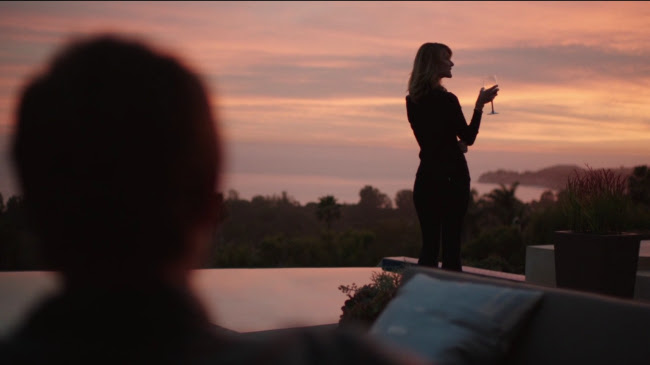 Once again, the influence of Twin Peaks is plain. The "goose that laid the golden eggs", as David Lynch has taken to referring to the first season of Twin Peaks, was so effective because virtually anyone on the show could be Laura Palmer's killer. This works out to be a subtle lure for examining every character's personality. Big Little Lies adds another layer by concealing the identities of both murderer and victim. 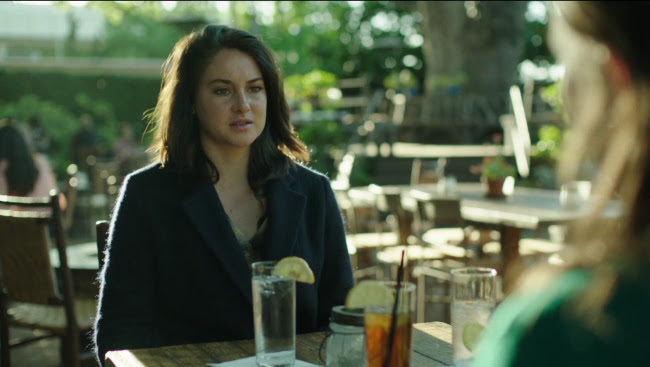 The first episode begins with a murder scene where neither murderer or victim are revealed. Various citizens from the ultra wealthy seaside town of Monterey, California are shown giving depositions where they freely gossip about all the main characters--without hesitating to cast aspersions on anyone, even to suggest they're capable of murder. These depositions are sprinkled throughout the series which is mainly set in the weeks before the incident. 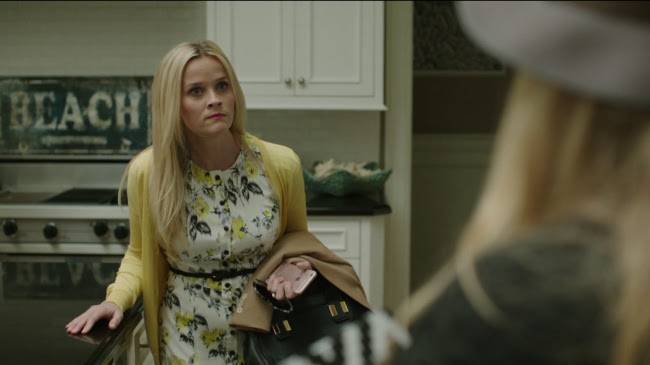 So in the soap opera style plot of most of the show we're forced to wonder how our reactions to each character might be altered if we knew he or she turns out to be the victim or the killer. The series primarily follows the points of view of three women--Madeline (Reese Witherspoon), Celeste (Nicole Kidman), and Jane (Shailene Woodley) and focuses primarily on their relationships with men. All the men on the show are either sexist bullies or pathetic worms. 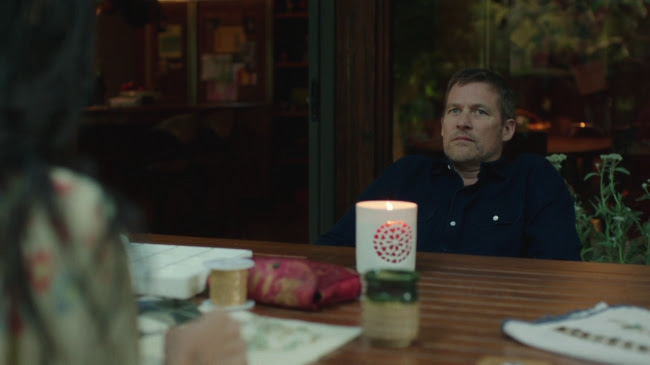 The series has been claimed by some as a "MeToo" series, though one can really only say that insofar as it eventually shows women bonding over their shared experiences with abuse. In terms of the witch hunt where prominent men are losing their careers and reputations based only on allegations, the series could more accurately be called an "anti-MeToo" series. The nature of communities to lie in order to tarnish the reputation of an individual for a variety of petty and paranoid reasons is central to the series' premise, most damningly portrayed in Jane's story. 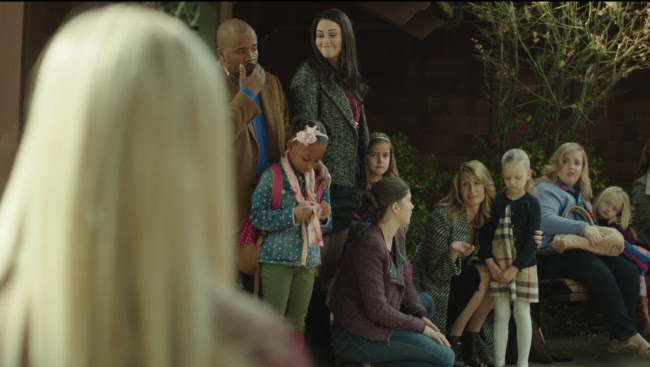 The main plot of the series begins as the women are taking their young children to their first day at school. Jane is new in town and on that day her son, Ziggy (Iain Armitage), is accused of trying to throttle a little girl named Amabella (Ivy George). When Amabella's mother, Renata (Laura Dern), asks her who tried to choke her, she's satisfied when the little girl points at Ziggy. Jane is indignant and insists her son isn't capable of such a thing. Very quickly, factions are formed in the community--the parents who side with Renata and the parents who side with Madeline, a prominent member of the community and something of a busybody, who decides to be Jane's champion. 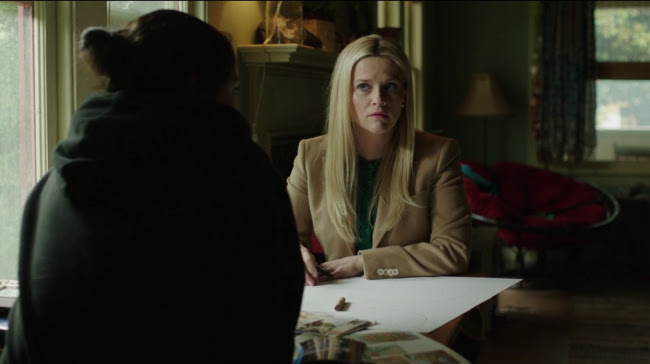 Later we learn Ziggy is the child of rape and the show effectively spends some time portraying Jane's anxiety over the potential for a compulsion for violence being passed on. But she's equally plagued by the very real nightmare of a community turned against her son. When one woman organises a petition to get Ziggy expelled despite the evidence of his guilt growing increasingly tenuous it's hard to believe no-one watching thought of many prominent recently accused figures. Much of the anxiety Jane feels on the show must be very like that felt by anyone who's been the victim of false accusations, whether Ziggy turns out to be guilty or not, which I won't spoil. Though I did figure it out halfway through the series. 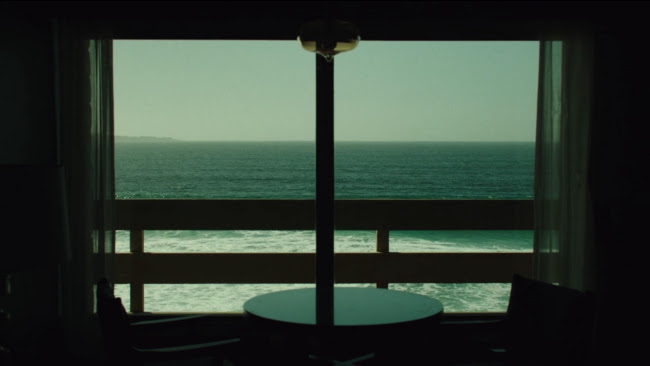 As for the murder, I figured out the victim but not the killer. Unfortunately, I mainly figured things out based on the familiar patterns of melodrama--the identity of the victim comes about after an extremely unlikely coincidence. But there is a lot of good writing on the show. I was a big fan of Kelley's Ally McBeal and an even bigger fan of The Practice--one scene where Celeste, a retired lawyer, argues at a council meeting--in support of a production of Avenue Q Renata is trying to get scrapped--shows nicely Kelley has lost none of his talent for writing legal drama. Renata's lawyers make a pretty good argument before Celeste calmly and persuasively shows the other side. 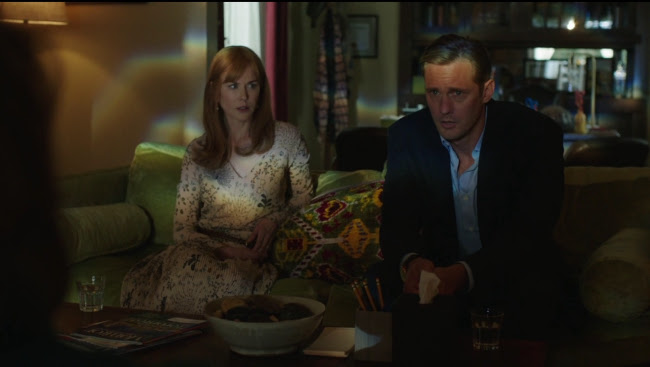 Nicole Kidman is really great on the series, particularly in scenes where she and her husband, Perry (Alexander Skarsgard), visit a therapist. When she lies about the level of physical abuse going on at home we can see the layers in her reactions, her conflicts about wanting to address the problem while also wanting to protect her relationship. 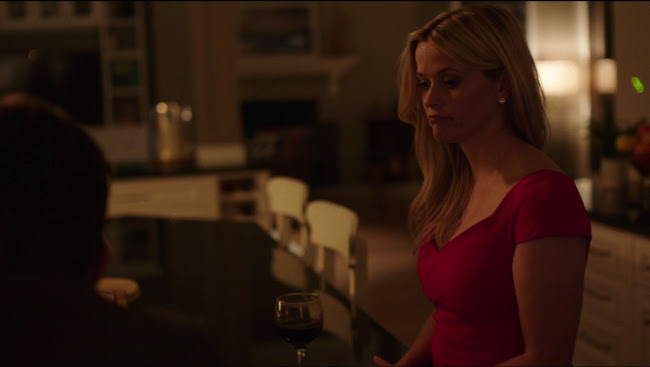 But the series primarily focuses on Reese Witherspoon's character. Witherspoon is good, she has effective comedic timing, and there's a fun progression from the first episode through the rest of the series when she starts off seeming like kind of a psychotic tyrant before becoming an imperfect person you really root for. Of course, the show does stack the deck a little bit--Kelley doesn't seem to have any talent or perhaps desire for accurately writing children, all of whom behave like little adults on the show. Particularly Madeline's younger daughter, Chloe (Darby Camp), who has the social tact to rescue her mother with a clever comment during an unexpected, fractious exchange with another mother. 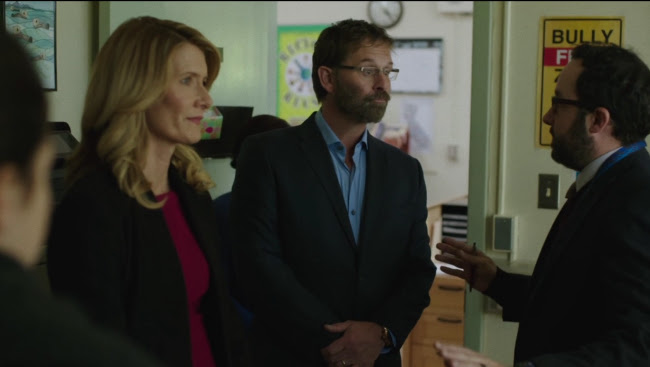 Each episode is directed with competence by Jean-Marc Vallee with plenty of eye candy for people who like modern, fashionable homes and clothes. The characters also frequently enjoy some really good music from the likes of Janis Joplin and PJ Harvey.

Departing ships accord the dock a glance.
A fallen wave consults an ancient watch.
The ocean tilts as cells begin to dance.
Upon the mast a coin's in driven notch.
Disordered cups adorn the tablecloth.
Decision Spiders planned the evening meal.
A cable knit announced impending sloth.
The pillowed land would simply have to deal.
The mail recovered slower than the man.
Inside a rusty fridge the soda grew.
The butter wanders slowly near the pan.
A golden gown awaits for something new.
Upon the silver hook's the nut of dough.
A leafy sea emits a tannin glow.