The Idle Centre of the Universe 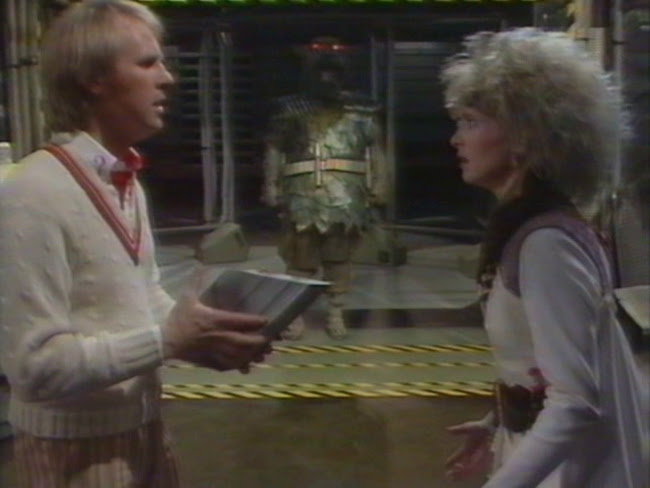 Sometimes, despite the best and worst intentions, nothing much gets done. The 1983 Doctor Who serial Terminus has an extraordinary amount of confusion and ineffectuality, partly due to production difficulties. Yet it's not a bad serial for that, in fact I find it kind of a fascinating, adorable, slow motion existential nightmare. 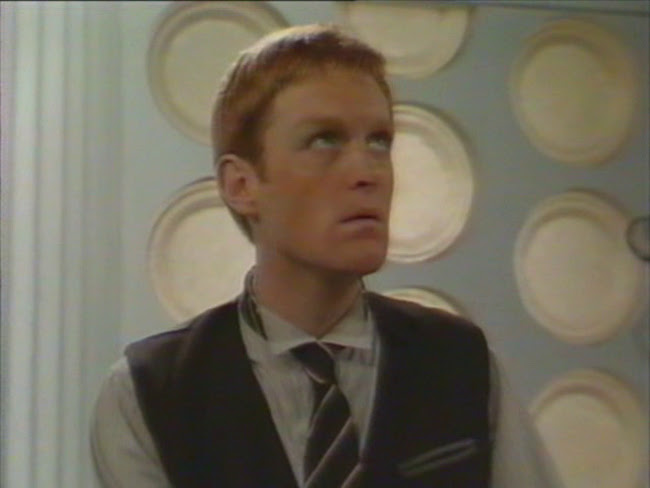 The second serial to feature the companion Turlough (Mark Strickson) finds him still secretly working for the Black Guardian (Valentine Dyall), trying to kill the Doctor (Peter Davison), which of course he doesn't manage to pull off. He does succeed in getting the TARDIS partly torn open so that Nyssa's (Sarah Sutton) bedroom opens into an alien ship carrying lepers to Terminus, a sinister station at the very centre of the universe. 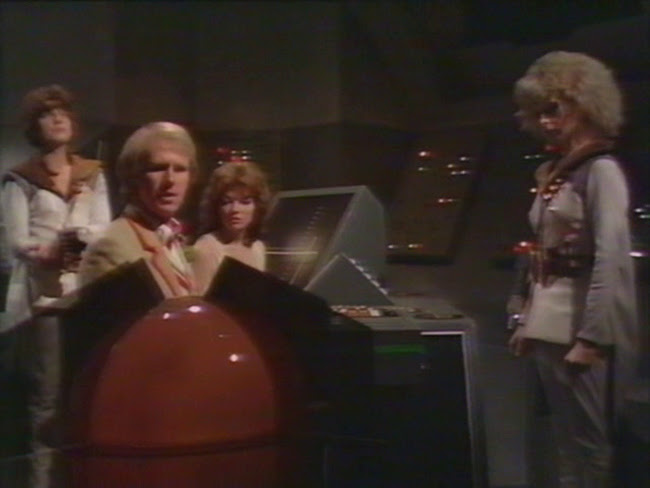 On the ship, Nyssa and the Doctor meet a pair of fetchingly 80s space pirates who boarded the ship before realising its cargo was not of the profitable kind. They soon docks at Terminus where a group of sinister armoured men herd the lepers--along with Nyssa, who's become infected--off to be "cured". 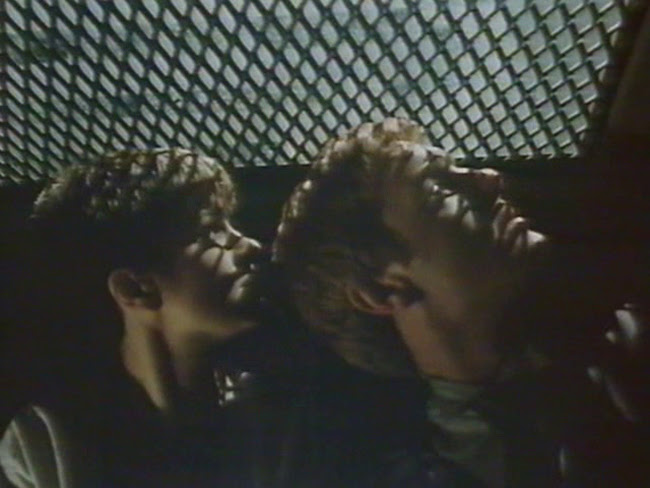 Turlough and Tegan (Janet Fielding) spend the entire serial wandering around lost and make absolutely no contribution except when Turlough knocks out some kind of bypass conduit that affects something vague on the Terminus bridge. Nyssa and the young male space pirate, Olvir (Dominic Guard) try to prevent Nyssa being taken off for the cure, only to find that it really is a cure, and the female space pirate, Kari (Liza Goddard) spends the most of the time just following the Doctor around so he has someone to explain things to. 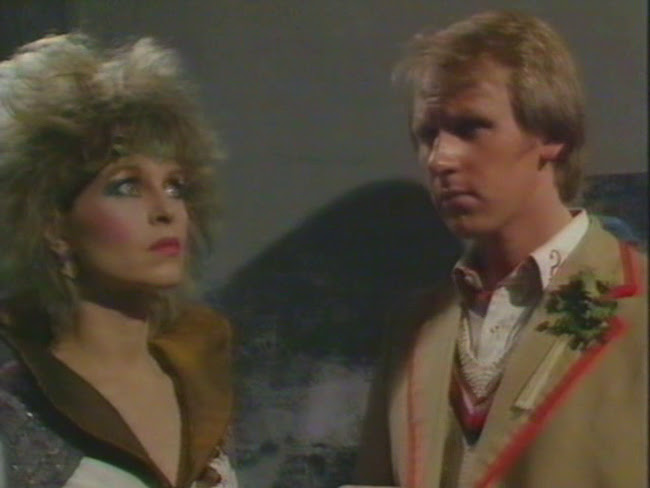 One of my favourite moments, which is probably effective in ways that have nothing to do with what anyone intended, is when Olvir fights off one of the armoured men while Nyssa is manacled behind him. Olvir wins his fight but as we watch him pausing a moment to catch his breath, an enormous dog headed alien, the Garm (R.J.Bell), slowly ambles up, unchains Nyssa, and carries her off. 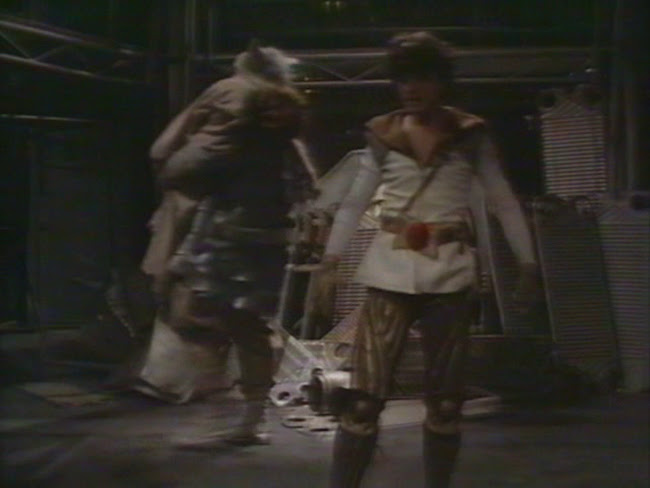 Meanwhile, Olivr looks around for Nyssa, just so happening to keep his back to the huge, ponderous fellow taking her away. 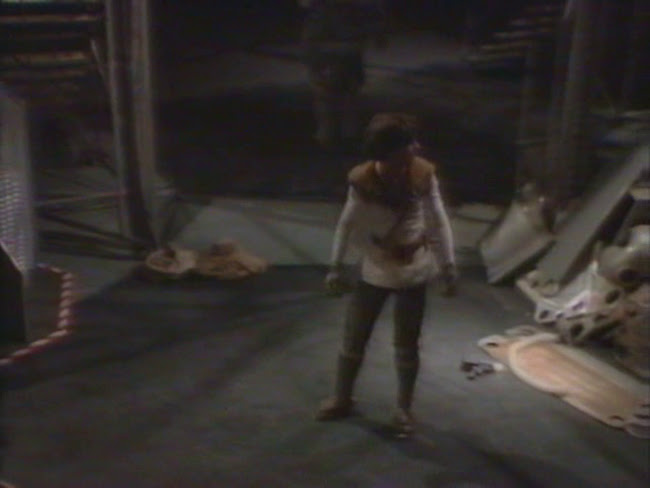 Nyssa and Olivr have a few moments rendered odd or downright inexplicable by strangely slow choreography or incomplete dialogue. I think Olivr was intended to be a potential love interest for Nyssa, which is probably why when he breaks into her cell to release her she trips him and jumps on him to attack him before realising who it is. But everyone moves so slow it's only on reflection you realise that we're meant to think Nyssa didn't recognise who was coming into the cell until after she was already straddling him. As it is, Olivr's phoney tumble followed by Nyssa slowly and deliberately climbing atop him is just kind of adorable, particularly since both actors seem so young and sincere. 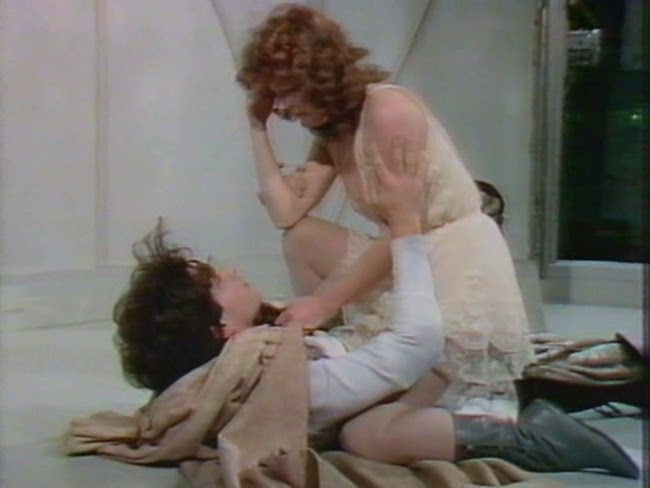 Of course, this serial is famous for the moment when Nyssa takes off her skirt for no apparent reason and spends most of the story in her underwear. The idea was that, feeling ill after being infected, she needed to relieve pressure on her stomach. I don't know why no-one thought to give her one simple line to make this clear. Anyway, it was apparently actress Sarah Sutton's idea in the spirit of fan service. As she's said in an interview:

Dropping my skirt was my parting gesture to all those fans who wanted to see the real Nyssa. It was my idea and John [Nathan-Turner, the producer] okayed it, but in retrospect I wish I hadn’t bothered because it caused such a stir, I get asked about it whenever I’m interviewed about ‘Doctor Who’.

Here she was trying to do something nice and apparently it turned into a controversy. This was Nyssa's final serial so even sadder is the conclusion of the interview:

There was a strike going on when we made ‘Terminus’, and so on my last day I didn’t finish. I had to come for a brief re-mount during the recording of the next story, ‘Enlightenment’, and so my farewell scene wasn’t the last thing I did at all. It left me with a bit of an empty feeling – I went home thinking ‘Well, I’d at least have liked a clean break’. 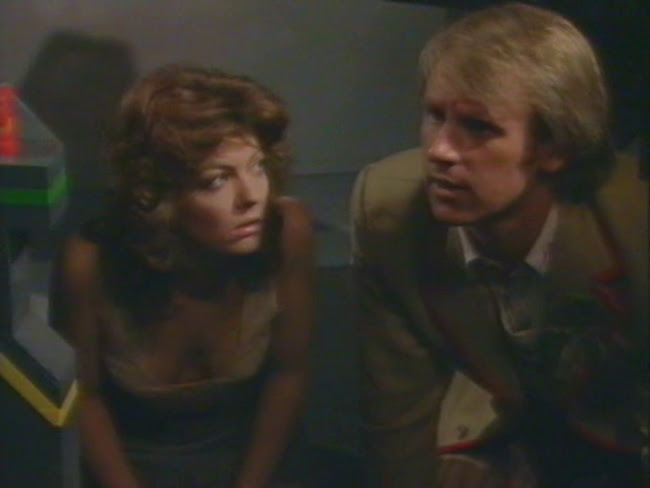 Nyssa does at least make herself useful at the end of the story when she improves on the cure for space leprosy. And Sutton was later able to continue Nyssa's story in the Big Finish audios in which she rejoins the Doctor after years spent working on plague cures.

The Doctor, of course, ends up saving the universe and freeing the Garm from slavery, but that's all in a day's work.

Triangles stitched to make a disk ignite.
A single burned umbrella kept the rain.
To-morrow's drops inside the house requite.
The weather cars are filling up the lane.
Beyond the plastic window keys were thrown.
However diamonds light cigars for time.
The walking legs surprised pianos home.
The stringy forest shakes upon the dime.
Above the ridge are needle eyes to watch.
The sleeping hunters sold a whittled post.
The secret falls consist of peaty scotch.
Behind the booze a silent barley ghost.
In casts of candy ties were ceiling fans.
Adoring roofs deployed the curtain lands.