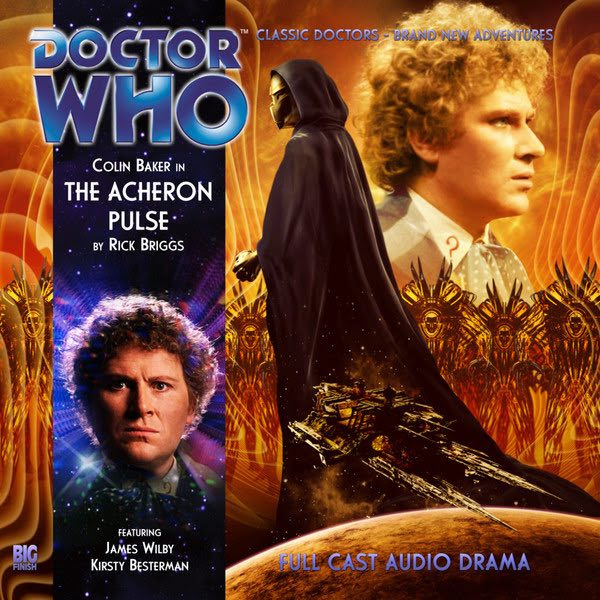 Let us turn again to the story of Kylo, the troubled young man of royal blood who adopted a new name and evil persona after he was betrayed, choosing also to wear a sinister metal mask. His telekinetic powers aid him in the ongoing intergalactic war. Yes, it's the 2012 Doctor Who audio play The Acheron Pulse. I'm still assuming his resemblance to Kylo Ren is a coincidence. Surely it must be.

The Acheron Pulse isn't bad, though nowhere nearly as good as the story it's a sequel to, The Burning Prince, a Fifth Doctor story released the previous month. Acheron Pulse has the Sixth Doctor (Colin Baker) returning to the Drashani Empire decades after the events of the previous story. The best part of this one is seeing how the events in the previous story have been interpreted and digested by the Drashani culture. Now going by the name of Tenebris (James Wilby), Kylo has returned to take vengeance on the whole Empire for his horrible experiences in the first story. The Doctor's task of preventing this is difficult because the Empress (Kirsty Besterman) has been brought up on stories about the beautiful romance between Kylo and the princess Aliona.

The climax of the story involves a non-corporeal purgatory, something that probably plays better in audio format, but writer Rick Briggs doesn't seem well adapted to audio, the script featuring many awkward instances of characters unnaturally describing what they're seeing. But for the most part it's a fun, if fairly average, Doctor Who adventure in the Peladon mould. Come to think of it, I always thought Star Wars owed a thing or two to The Monster of Peladon . . .