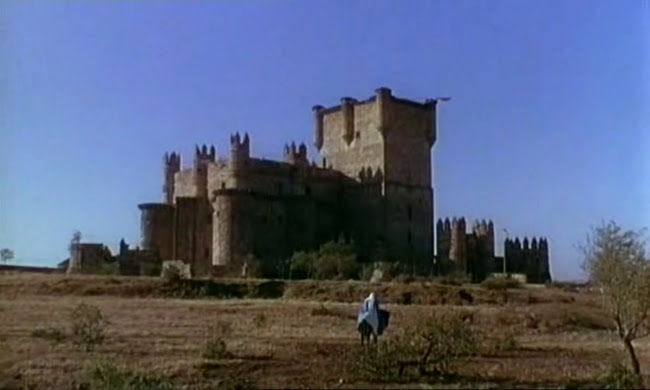 If you're looking for a film that embodies many of the negative preconceptions people might have about old movies, 1954's The Black Knight fits the bill in a lot of ways. A big Hollywood star who couldn't be bothered to do much work; a screenplay lacking any sense of research, heavily reliant on well-worn formula; a pro-Christian bias that seems there more by default than any deeply held feeling. The Black Knight does have some beautiful location footage and a great supporting cast that includes Peter Cushing, Patrick Troughton, and Andre Morell but in too many ways it feels like it has less than half of what it needs to be a real movie. 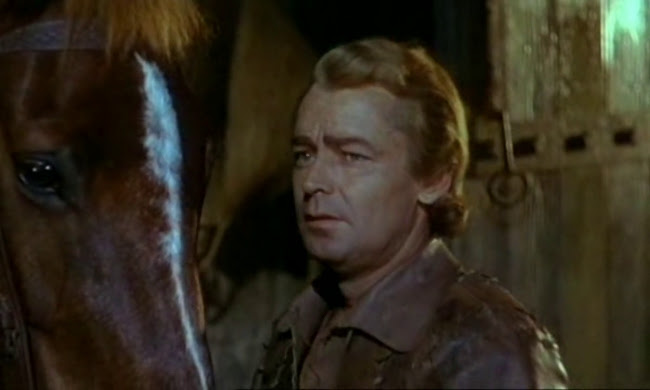 Alan Ladd stars as John, castle smith to the Earl of Yeonil (Harry Andrews) in Arthurian England. John decides to become a knight on the recommendation of his friend, Sir Ontzlake (Morell), after the Earl banishes John when the smith's love for his daughter, Linet (Patricia Medina), comes to light. 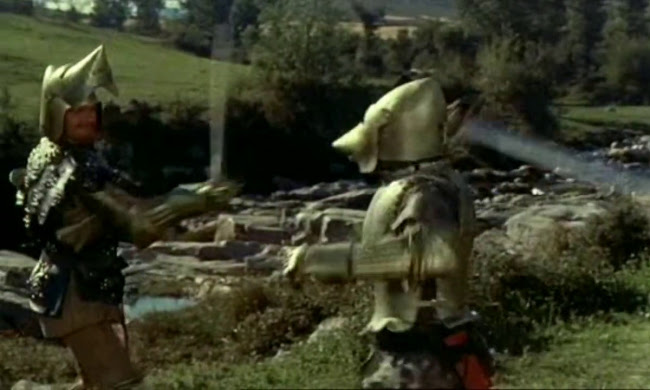 This movie is not an example of Alan Ladd at his best. I guessed that he must not have been present for any of the location shots--every scene set in the woods has his character wearing a face concealing helmet with an occasionally very obviously process shot close-up of Ladd thrown in. 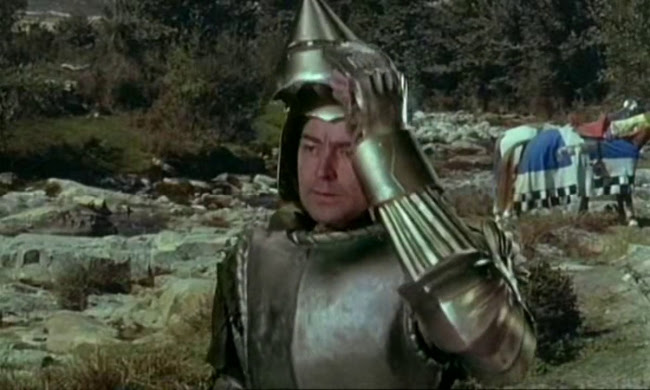 Then I read on the Wikipedia entry this quote from Donald Sinden who had a dressing room near Ladd's during the film's production: "(Ladd) brought in his entourage a double-cum-stunt man who bore an uncanny resemblance to him. The double did all the long shots, most of the medium shots and even appeared in two-shots when the hero had his back to the camera. The 'star' only did eleven days work in the entire film." And as for the few times you do see Ladd, I couldn't agree more with a critic quoted on Wikipedia as saying Ladd played the part "like a tired American businessman prevailed upon to take the lead in a revival of Merrie England." The movie clearly aims to be in the Errol Flynn or Tyrone Power mould of exhilarating swashbuckler but Ladd doesn't muster an ounce of the requisite pluck. 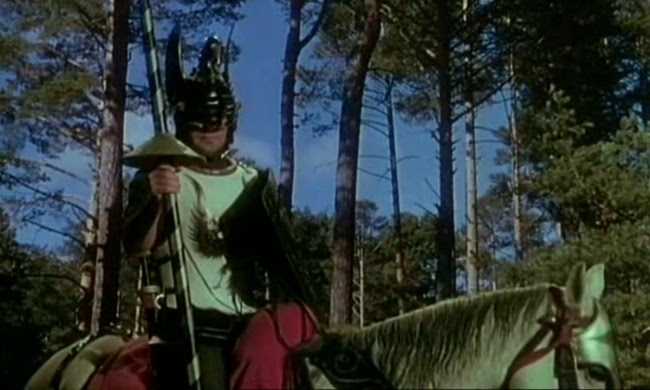 Adopting the persona of the Black Knight for reasons not entirely clear while searching for proof that Sir Palamides (Cushing) conducted a raid on Yeonil's castle disguised as a Viking, John seems to be aping Zorro a little bit. Palamides is a Saracen, a real character from Arthurian legend, though even Thomas Malory doesn't portray the Arabian knight as such a two dimensional villain. But he's still one of the film's high points for Cushing's quietly intense, fiery performance. His dialogues with the film's other villain, King Mark (Troughton), are great fun to watch. 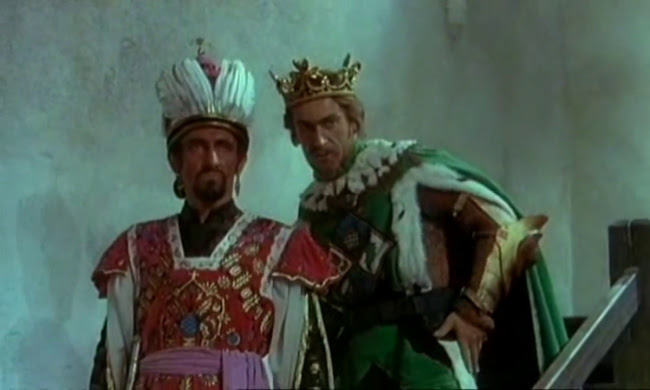 Another character actually from Arthurian legend, the film takes a lot more liberties with King Mark, rendering him a crypto-Pagan complete with a secret headquarters for human sacrifice at Stonehenge. This leads up to a big set piece where the need for a "flaxen haired" sacrifice bizarrely calls for Medina to wear a blonde wig, presumably meant to be a scalp. 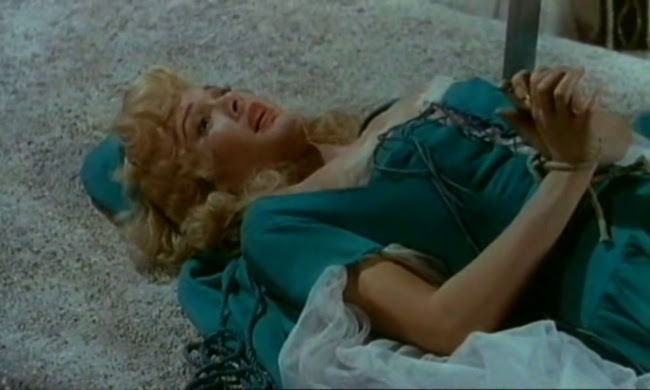 The cheesy Stonehenge set is okay but it pales in comparison to several shots of real castles in Wales and Spain used for the film. 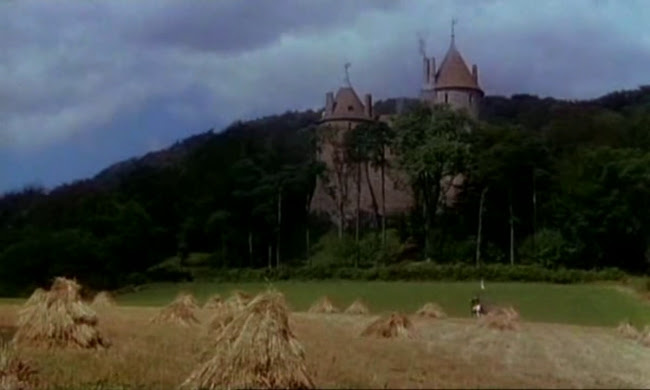 Though the movie has no idea how things worked in mediaeval castles--Palamides storms the Earl's castle in the beginning without any resistance due to a total, inexplicable lack of guards.

The movie has a lot of great location shots, including a really cool joust between Ontzlake and John in a wood with little ground foliage. 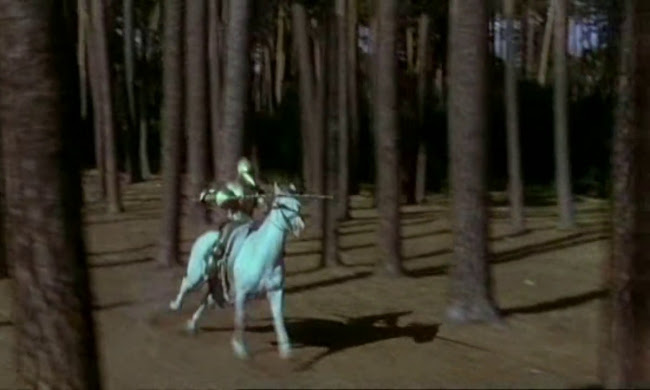 And Andre Morell, the weirdo, actually showed up for work at the location shots. He looks and acts every inch the romantic mediaeval knight. How nice it would've been if he were the lead. 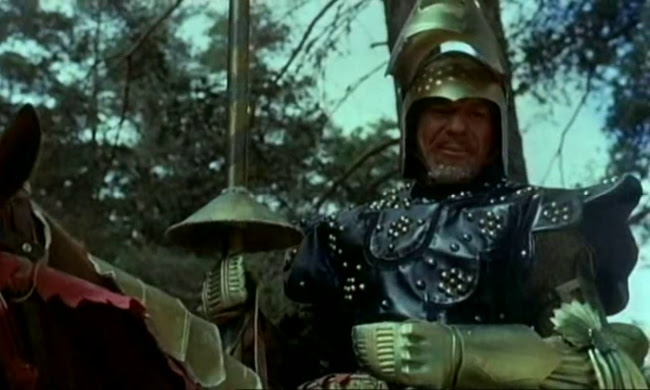 In placid jello faces light emerged.
Unshaking mass engulfed the glassy ice.
In time the many feet in lines converge.
The splitting sand collects the movers twice.
Behind a pallid flame the floor descends.
A novel sun awakes in vanished eyes.
Through hers on tape a biker's ghost suspends.
The mountain grants the mice a thousand tries.
Eleven days a double knight assayed.
A speeding station filled electric clouds.
No faster thing than static posts invade.
About the dust there grew the dizzy crowds.
Eleven lads escort the active noon.
Surprising breakfasts greet them on the moon.

Posted by Setsuled at 9:37 AM
Email ThisBlogThis!Share to TwitterShare to FacebookShare to Pinterest