Last night we may have seen the point where the writers just completely stopped trying to tell a coherent story on Star Trek: Discovery. Abruptly swerving into a clumsy political allegory, characters that fly completely off any semblance of tracks, and with some awkward action sequences, "Past is Prologue" did have some nice performances, some kind of nice call backs to Star Trek II to remind us Nicholas Meyer was working on this show, and the show finally introduced a few of Star Trek's best qualities that'd been lacking on Discovery so far. 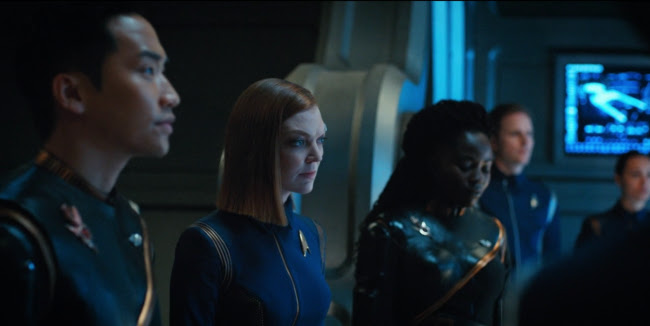 It was nice to see the rest of the bridge crew finally being able to make substantial contributions to the conversation. They all looked pretty intriguing, I don't see why Tilly (Mary Wiseman) had to be doing a one woman show on the ship for the past few episodes. Maybe we'll get to know that cool looking cyborg lady better. 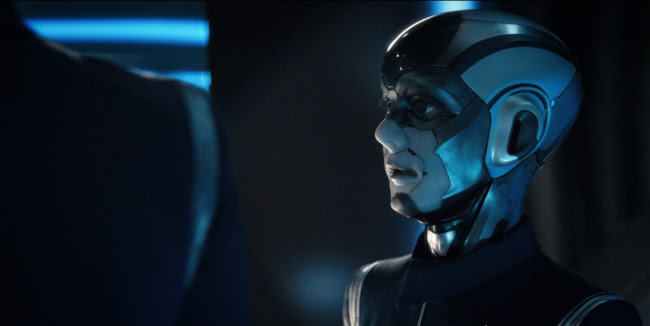 Meanwhile, on the Charon, a story that probably needed at least five episodes is crammed into one. Lorca (Jason Isaacs), who, as was established last week, has been Mirror Lorca all along, sets loose a small army of his followers who were conveniently stashed in nearby Agoniser booths. He assumes somehow that Burnham (Sonequa Martin-Green) has already figured out he's Mirror Lorca and that she's chosen to side with Georgiou (Michelle Yeoh) despite the fact that this Georgiou eats people and wanted to have Burnham killed. 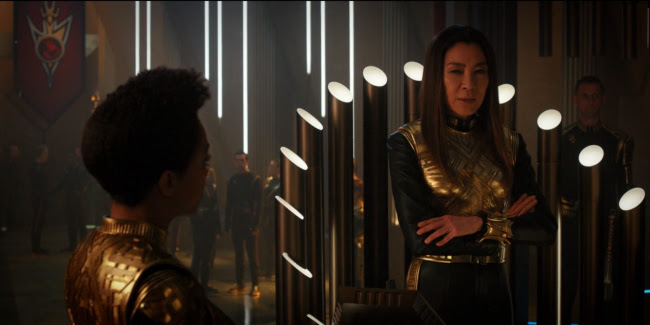 Was anyone else hoping to hear Georgiou play Bach's "Toccata and Fugue in D Minor" on her pipe organ throne?

I hate allegory (for the reasons J.R.R. Tolkien has eloquently given) but I can't deny it's a classic Trek thing to do. But the hasty measures taken to turn Lorca into Donald Trump were exceedingly unwieldy. For one thing, I don't think Trump has the mental dexterity to pass as a Starfleet officer for so long. But his argument that Georgiou is allowing aliens to flood over the border--how does this argument gain traction in even the most delusionally racist minds? This is the Georgiou we saw recently slaughter a group of alien rebels.

I have to say, though, if aliens are trying that hard to get into the Terran Empire the alternative must be pretty horrific. Maybe they're running from the Cardassian-Klingon alliance that eventually took over the Terran Empire on Deep Space Nine?

I'm glad to have Michelle Yeoh back on the show but I would've liked more development of Mirror Georgiou's relationship with Burnham. Maybe instead of a Burnham who seems instantly absolutely certain of everything really fast, we could've had a period where she was studying Mirror Georgiou to find some hint of humanity, with moments where Burnham's preconceptions about human nature were challenged as she gradually was forced to admit she still feels a connexion with this woman. Though, since that's also probably the story that needed to happen with Tyler, there may be too many ingredients in this soup to leave any room for base. 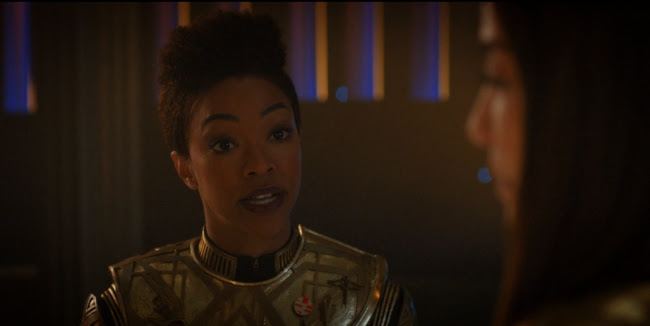 Why does Burnham side with Georgiou instead of Lorca? All she knows about Mirror Lorca at this point is that she had a pretty good working relationship with him before she knew he was Mirror Lorca and that before that he was trying to overthrow Mirror Georgiou, the racist mass murderer. It's uncertain whether she figured out that Lorca had deliberately brought Discovery to the Mirror Universe but he would still seem a better ally than Georgiou. I'm forced to conclude she's fighting him entirely because he had a relationship with Mirror Burnham that went from parental to sexual. Which might be creepy though we know very little about it. He still seems a better bet than the Emperor who wanted to kill Burnham, the Emperor who thinks Saru (Doug Jones) is an entrée--Lorca, meanwhile, seems to have genuine respect for Saru. Maybe if, over a series of episodes, a rift had been established between Burnham and Mirror Lorca, maybe one were his sexual attraction to her was related to some patronising sense of superiority, this would have all played out more coherently. As it is, all we have is the memory of him complementing her ingenuity and courage when they first met. When he said "Context is for kings" he was clearly including Burnham in the "Kings" column. 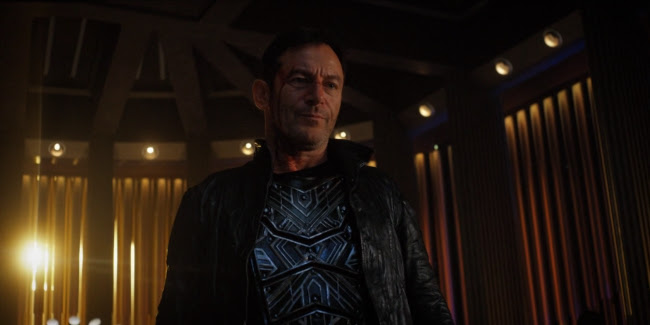 Lorca kind of reminds me of when Derek Jacobi played the Master for an episode of Doctor Who. Up until the newest incarnation of the Master, Missy, he was one of my least favourite aspect of Doctor Who because he was such a two dimensional villain (though I have come to appreciate the complexity suggested by some of the hints at friendship between Roger Delgado and Jon Pertwee). But Jacobi had some layers to work with due to the Master's lose of memory and it was genuinely intriguing watching the cracks starting to show as the old personality started to assert itself over the decent man he thought he was. Then John Simm took over and he was just the boring old Master again. Jason Isaac's performance on Star Trek: Discovery has been similarly intriguing, forcing you to watch him to try to figure out what his motives really are, the ambiguity hitting just the right note to seem like a genuinely mysterious character. The flat character he abruptly becomes in "Past is Prologue" is inevitably a let down. I am hoping we'll get to meet Prime Lorca, though.

It is nice to see everyone seems to be using viewscreens now instead of holograms.

Misplacing sums retires mice to tails.
A passing lock rebuffs the largest grief.
To pepper soup's to loose the baby's wails.
The standard tea by half is all too brief.
The amber pudding held a gummy bug.
In op'ras sprung the dates for haste delay.
To fires draw the frozen shadows snug.
For giants wrought of eyes the songs allay.
The scarab rows reformed in jelly wine.
For fixing rows of ceiling tombs recall.
The scalps're lately spun in thinning twine.
More lakes than springs could salad days forestall.
The river brings the brains to party shops.
The fractured marble surface clouds the stops.