Back to Villa Diodati for the First Time The obvious point of comparison for last night's new Doctor Who would be the series of Eighth Doctor audioplays featuring Mary Shelley as a companion. Certainly the episode, "The Haunting of Villa Diodati", lifts much of its basic premise from those 2011 audio plays, but I found myself surprisingly reminded of The Ghost Breakers, a 1940 comedy starring Bob Hope and Willie Best, aka Sleep 'N Eat. Seeing Ryan (Tosin Cole) in 19th century garb obviously brings to mind attitudes about race at the time while the writers' decision to portray Ryan as goofy and stupid resulted in a surprising moment on the stairs when he reacts to what he thinks is a ghost bumping his elbow, with exaggerated fright. And I thought of Willie Best and any number of black comedic performers in the mid-20th century who were cast in roles that reinforced stereotypes of black people as being stupid or lazy. Funny how this kind of portrayal is now considered progressive. Weird how we come full circle. It should be said Willie Best gave a much better performance, with a better sense of comedic timing, than Tosin Cole.

Graham (Bradley Walsh) is certainly no Bob Hope so I guess we could say the white guy, or at least one white guy, comes off just as stupid. Though Lord Byron as portrayed by Jacob Collins-Levy comes off as a broad, idiotic cad, come to think of it. His attempts to flirt with the Doctor (Jodie Whittaker) are automatically rebuffed. Wouldn't want sexual tension, would we? Not when we've succeeded in getting the ratings below five million in the UK, back to the levels of Capaldi's last season. Hmm, there wasn't much sexual chemistry between Twelve and Bill, either, was there? Yet at least the writing was sharp in that season, even if it was unpopular. One of the ways in which the Eighth Doctor audioplays are superior to Sunday's episode is that they allow the Doctor and Mary Shelley to engage in intellectual discussion instead of just bumbling about. 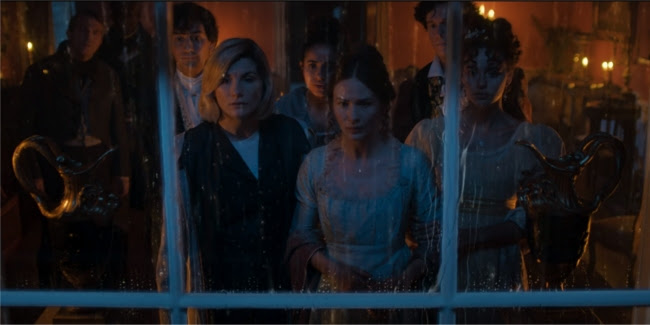 But "The Haunting of Villa Diodati" happens to be one of the better episodes of the season, or maybe it's just that I'm a sucker for haunted house stories. The premise of a house where people seem to move continually into the same room even reminded me of the Halloween episode of Simon and Simon that made an impression on me as a child. I also thought the design of the Lone Cyberman (Patrick O'Kane) was pretty good.

Yet one can't help thinking back to the Eighth Doctor audios again and again, especially since, like this episode, they made something of the fact that 1816 also happened to be the "year without a summer" and also had Mary Shelley encounter Cybermen to draw comparisons between them and Frankenstein. This wouldn't be the first time an episode of the revived series was based on an audioplay--the Ninth Doctor story "Dalek" was written by Robert Shearman based on his own Sixth Doctor audio Jubilee, though the stories were different enough that one could still imagine them both existing in the same continuity. A few episodes have even seemed to draw on audios without crediting the source before--the Tenth Doctor story "Fires of Pompei" has noticeable similarities to the Seventh Doctor audio The Fires of Vulcan. But even then, "Fires of Pompei" brought plenty of new ideas to the table where "The Haunting of Villa Diodati" just feels like a partial synopsis.

So now it looks like we have to choose between continuities. Do we consider the Eighth Doctor audios canon or "The Haunting of Villa Diodati"? Hmm. It's kind of like asking would you rather drink champagne or water with the crushed ice from a McDonald's beverage dispenser. 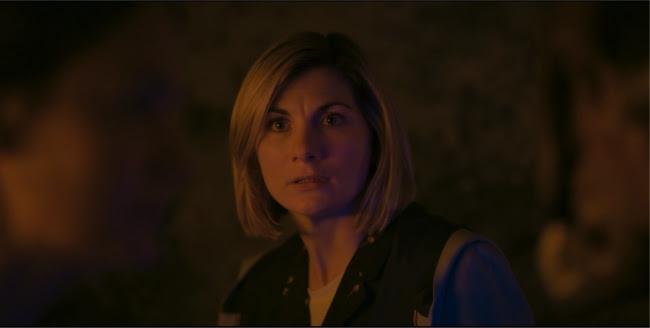 The Doctor had a big speech in this one about how sometimes she's the only one qualified to make a decision and how lonely that is. Which seemed a bit cruel given how obviously deficient her companions are. Though I was surprised last week when the show took so much heat for the Doctor's insensitive reaction to Graham. The Doctor's supposed to be insensitive to the human experience sometimes. Sure, it was badly written and even Twelve would probably have conveyed a sense of being troubled even through a gruff response. But at least it was somewhat in character for the Doctor. I guess we all have our particular tastes as to what qualifies as the worst writing.

It's worth remembering the best portrayal of Mary Shelley on that fateful night remains Elsa Lanchester's in Bride of Frankenstein.

Posted by Setsuled at 3:49 PM
Email ThisBlogThis!Share to TwitterShare to FacebookShare to Pinterest
Labels: doctor who, television show, tv show