The Sonic Screwdriver and a Bunch of Words 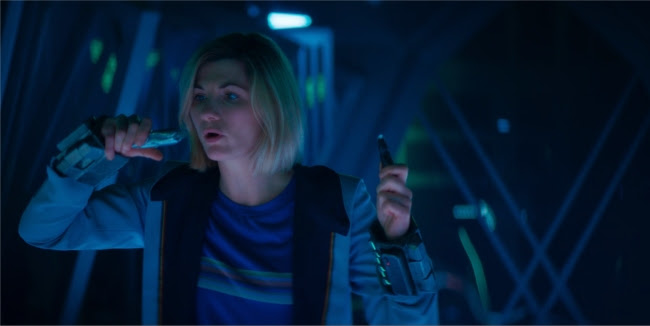 As infamously bad as the Thirteenth Doctor's era has been, no episode has been quite so boring as Sunday's new episode of Doctor Who. I checked to see how far in I was at one point and was startled to find I was only twenty four minutes in. It felt at least like two hours. Ironically, I'd say the main problem with the episode is that it moves too fast; the reason it feels like such a slog is that it's composed almost entirely of infodumps rapidly edited together. No time is spent for atmosphere or mood to accumulate, a deadly mistake in a story about living nightmares.

It's a shame a pretty decent werewolf design goes to waste. The story begins in Aleppo in 1380 where an order of Muslim women care for the mentally ill, something the Doctor (Jodie Whittaker) later hastily compliments them for though we never see any patients. The werewolf creature is terrifying according to the dialogue though director Emma Sullivan seems to have failed to instruct the actresses to allow this fear to show in their faces or line deliveries. Even when a monster wraps its claws around one woman's face conversation maintains an almost casual tone. 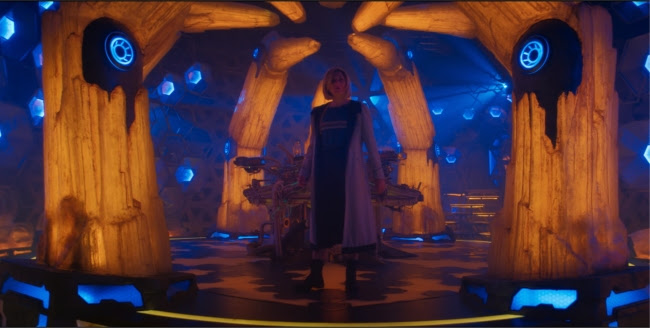 My hopes went up a bit when the Doctor separated from her companions, leaving them back in Sheffield, but, sadly, the plot followed their doings as well in order to focus on how anxiety and depression impact them in their lives. Ryan (Tosin Cole) has a friend whose anxiety keeps him in the house while Yas (Mandip Gill) recalls a time when she ran away from home due to some vague, unspecified emotional trauma. In both cases, the treatment of anxiety feels so sterile and impersonal between the lifeless performances, the limp directing, and the stiff dialogue that one is reminded of the worst of 1980s PSAs and After School Specials. 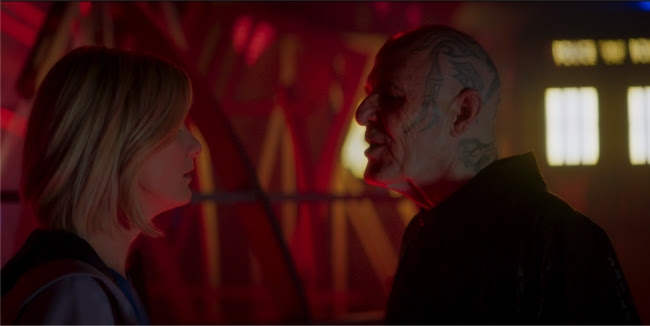 This week's stunt casting is Ian Gelder as a godlike being named Zellin whose penchant for making humans his playthings compels him to awkwardly namecheck other godlike beings from the show's history as though this sadistic deity nevertheless feels the need to obsequiously placate classic Who fans.

But speaking of the 80s and classic Who . . . I never thought I'd say this but it's time to take away the Doctor's sonic screwdriver again. The decision to take away the sonic screwdriver in the Fifth Doctor serial The Visitation was due to producer John Nathan-Turner's idea that writers had been using it too often as a quick solution for the Doctor. My argument has always been that this called for more creativity from the writers, not for the destruction of any particular device. But watching Thirteen constantly wave it around, glance at it once, and then spew a litany of plot concept and technobabble, I couldn't help thinking the current staff need a kick in the pants. And this was before a moment I'm sure will go on every future reel to demonstrate the vapidity of Thirteen's era, when she seemingly escapes from manacles by pushing the sonic screwdriver out of her coat with her hip, the pocket spitting it out like a watermelon seed into her hand. 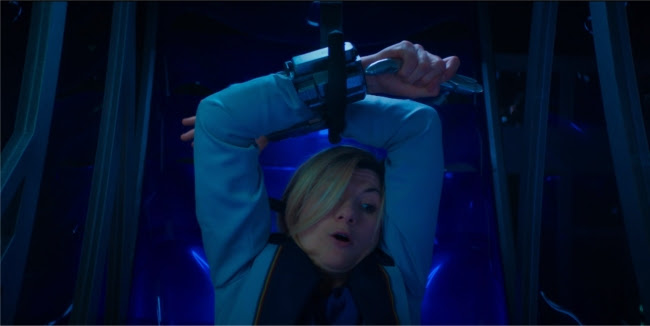 There's a pathetic moment later when the Doctor brags of her cleverness for this escape. Someone needs to tell the writers that she's the Thirteenth Doctor, not thirteen years old.

Posted by Setsuled at 11:11 AM
Email ThisBlogThis!Share to TwitterShare to FacebookShare to Pinterest
Labels: doctor who, television, tv show