Cat of the Mind 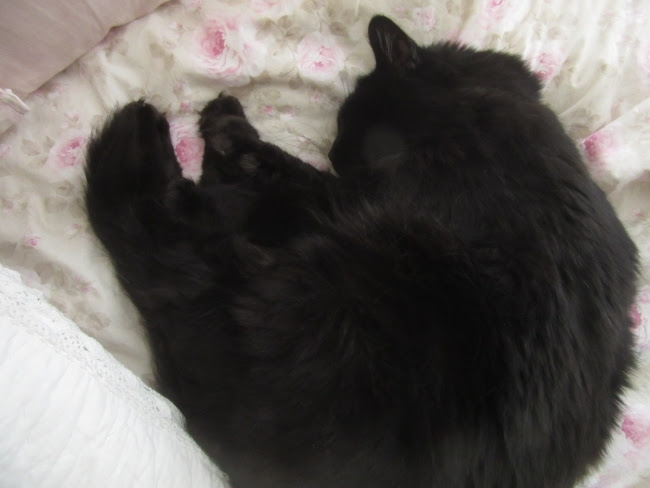 Pictured above is one of my roommates. I was reminded of her while reading "Ancient Sorceries" (1908) by Algernon Blackwood, one of the stories included in H.P. Lovecraft Selects, a compilation of tales drawn from Lovecraft's essay on horror fiction. It has a lot to do with cats, with a town seemingly populated by witches who can take the form of cats, and few works of prose have so vividly conveyed an essence of catness before any actual cats even show up.

The inn, a rambling ancient house, the atmosphere of the old coaching days still about it, apparently did not welcome him too warmly. He felt he was only tolerated, he said. But it was cheap and comfortable, and the delicious cup of afternoon tea he ordered at once made him feel reallyvery pleased with himself for leaving the train inthis bold, original way. For to him it had seemed bold and original. He felt something of a dog. His room, too, soothed him with its dark panelling and low irregular ceiling, and the long sloping passage that led to it seemed the natural pathway to a real Chamber of Sleep—a little dim cubby hole out of the world where noise could not enter. It looked upon the courtyard at the back. It was all very charming, and made him think of himself as dressed in very soft velvet somehow, and the floors seemed padded, the walls provided with cushions. The sounds of the streets could not penetrate there. It was an atmosphere of absolute rest thatsurrounded him.

Lovecraft mentions it as the best of Blackwood's John Silence stories, Silence being a physician detective a bit of the Sherlock Holmes type, though Lovecraft spends a lot more time talking about "The Willows" and other Blackwood stories. Still, it's not hard to imagine "Ancient Sorceries" had some influence on Lovecraft's stories about Ulthar, the town in his Dreamlands where cats are revered. I'd also bet it was a big influence on Val Lewton's Cat People, especially in how the narrative begins to focus on a single young woman who seduces the protagonist.

She moved wonderfully, with sinuous grace, like a young panther, and her approach filled him with such delicious bewilderment that he was utterly unable to tell at first what her face was like, or discover what it was about the whole presentment of the creature that filled him anew with trepidation and delight.

I love that detail about not being able to see her face. Much of the story is spent on the general atmosphere and character of the town before the girl is introduced. Blackwood so wonderfully communicates the sense of falling under a spell, of simultaneous fear and pleasure. The story is one of the most wonderful I've read for simply sinking into. There's also a great psychological element to it as the protagonist--not Silence but a nervous man who tells the story to him--attributes much of the dread and longing he feels to something inside him, to a fearful possibility of acknowledging something fundamental about his own nature. The traditional interpretation of this would be to say that the protagonist, Vezin, is struggling with repressed homosexuality, which is fair. Especially insofar as homosexuality at the time brought with it the sense of so much danger and uncertainty. But for not being explicitly about homosexuality, the story allows us to experience this sense as something that still has, and likely always will, have currency. We are still dreadfully mysterious to ourselves.