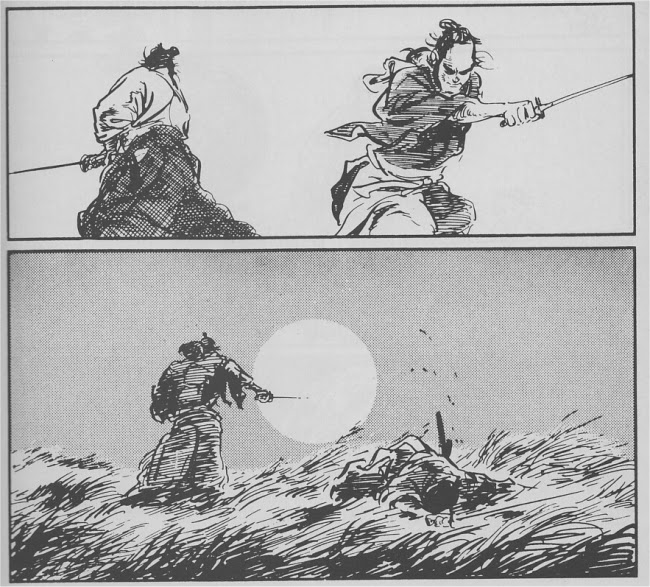 In 1970, a manga with beautiful, I'd say just about flawless, artwork debuted called Kozure Okami (子連れ狼), released in English speaking markets seventeen years later under the awkward title of Lone Wolf and Cub. It's been adapted several times to film and television but the manga remains the definitive version, I'd say because of the artwork by Goseki Kojima. 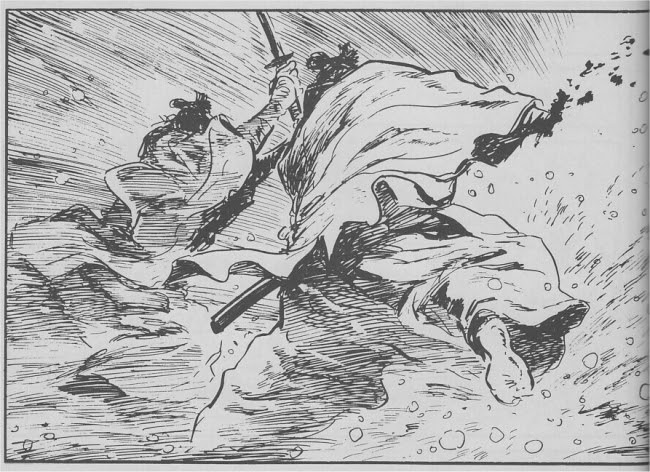 As a comic artist myself, it's the kind of thing that makes me want to give up, it makes me feel like a complete amateur. But I have to remember there are always going to be people out there who are absolute masters and we all have to live in their shadows. Still, jealousy compels me to pick out flaws and I would say Kojima's not the best when it comes to drawing naked women who tend to look suspiciously like wooden marionettes with mosquito bites on their chests. 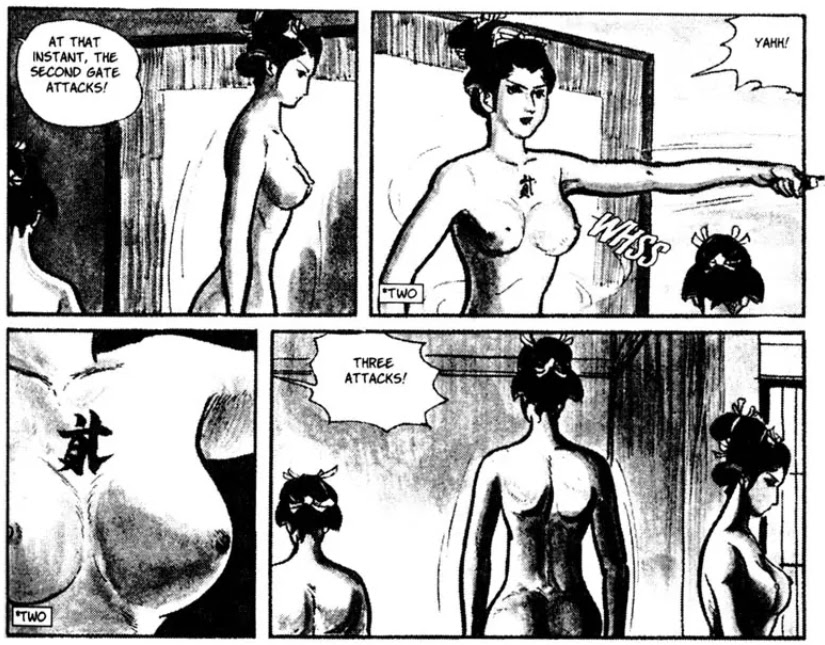 But I feel a little ashamed of myself even saying that because these drawings get the job done and 95% of the rest of the time every panel is breathtaking, some even more than others. 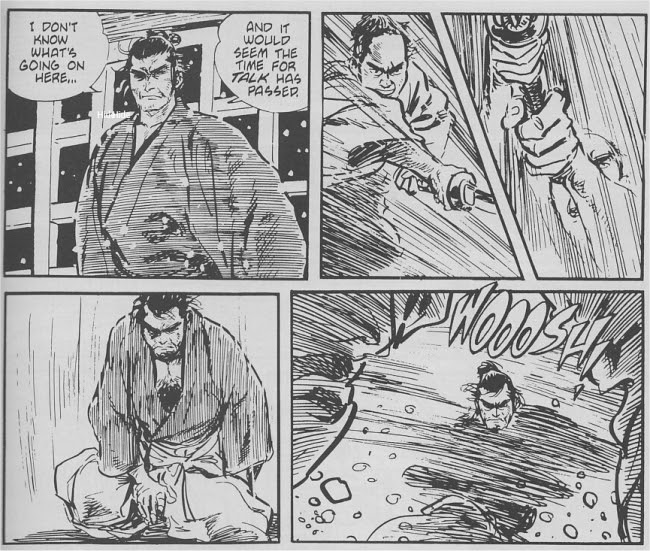 The lead character, a mysterious ronin, often looks identical to Toshiro Mifune and Kojima's gorgeous depictions of windswept fields and shabby streets clearly look like he'd watched Yojimbo more than a dozen times. But he makes the aesthetic his own, bringing Kurosawa's Hollywood Western inspired samurai into the realm of classical Japanese ink art. I've read the first eight chapters so far and each is essentially a stand alone vignette. The stories are much pulpier than Kurosawa, more like Zatoichi or Lady Snowblood than Yojimbo or Hidden Fortress. The Kozure Okami is proficient and indomitable on a more supernatural level than any of Kurosawa's more realistic protagonists, even Sanjuro.

The Japanese title is much nicer than the English one though it means basically the same thing. But in Japanese you can make simpler adjectives from more complicated ideas than you can in English so "Kozure" describes the "Okami", the wolf, as someone who brings a child with him. This leads to some unwieldy dialogue in the English translation in which it seems the ronin is referred to, by himself, as "Lone Wolf and Cub" and other times it seems to encompass the child as it naturally would in English. 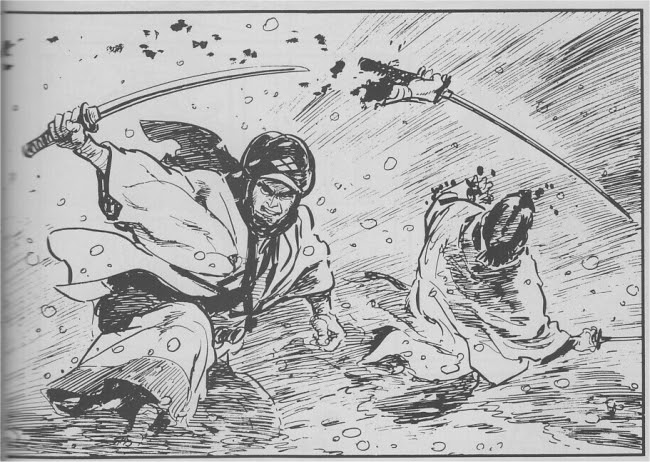 I picked up a copy of the first Dark Horse omnibus at a used bookshop after watching The Mandalorian. The cover features art by Frank Miller from an earlier edition from series' first U.S. release, which is decent art, but can hardly compare with Kojima's. Like many people, I thought The Mandalorian must have been influenced by Kozure Okami, and maybe it was, but there are fundamental differences between the two kinds of storytelling that led me to realise in another way what, precisely, is the problem with Star Wars under Disney. The Kozure Okami works as a hired killer and though sometimes he seems to have his own idea of fair play and kills based on his own desires, he also doesn't seem to react when, after he's been taken captive, an innocent bystander is raped and murdered in chapter 8. He shows a willingness to kill, and does so, even when people might not wholly deserve it. Sometimes he just has to do it to survive and he's clearly made his peace with that fact. Not so the Mandalorian for whom life somehow constantly, conveniently arranges itself so his choice is always between absolute good and absolute evil. Under Disney, Star Wars is about good versus evil and under George Lucas it really wasn't. I say this even as I suspect that there may be an interview somewhere where Lucas himself has said, "Star Wars is about good versus evil," but I think it may be better classified as "Light versus Dark". Disney's sequel trilogy doesn't really acknowledge reasons as to why the Dark Side might be more attractive but this is exactly what makes The Empire Strikes Back the best movie of the original trilogy and it's also one of the best qualities of the prequel trilogy. Yoda describes Vader's choice as taking the "quick and easy" path. This may be Yoda's own bias--Vader's path doesn't look that easy, really, except when it comes to making decisions. The "light" side is filled with internal conflict--Han and Leia have trouble sorting out their feelings for each other, Luke wants to prove himself but struggles with his faith in the Force. Meanwhile, Vader just Force chokes anyone who fails him and moves on to the next task.

Rian Johnson's film implied Luke was wrong to see the Jedi only as the sum of their flaws, hinted at and developed in the prequel trilogy, but Last Jedi, despite being the analogue for Empire, has very little discussion about the relative merits of the Dark and Light sides. But the problems with the Jedi were right there in the original trilogy. Obi-Wan's great line, "“Luke, you're going to find that many of the truths we cling to depend greatly on our own point of view," says it all. Obi-Wan was so comfortable with that fact that he had engineered his own perspective to look at Vader and Anakin as two separate people. He didn't hesitate to tell Luke that Vader had killed Anakin in A New Hope. After all, it served his purpose, to drive Luke in the right direction; he was essentially creating propaganda. So it's no big deal for him to describe Vader as simply, "twisted and evil."

It makes sense for Rise of Skywalker to be about the redemption of the Jedi as an order since, arguably, it was Luke's defiance of Jedi orthodoxy that brought him victory in Return of the Jedi--he dared to believe a Sith Lord could be reclaimed. Redeeming Ben Solo was a good step but it would have been even better to introduce complexity to Palpatine's story. Hopefully there's still time for that.

Proportion sags behind a wall of milk.
The funny nails returned again to stick.
A car was washed in rags of shredded silk.
Demented fog about the land was thick.
A walking lens deserts the glasses frame.
Deserted screens remember showing films.
For any lump of vision takes its name.
Projector light at sea too often dims.
A laser sound intrudes on cable's night.
A shadow marred the matte behind the glass.
In paint and paper plays beguiled sight.
Electric eyes combine in jelly mass.
Discordant pairs disrupt the gentle reeds.
Distracted thoughts'll sow disturbing seeds.