The Contamination of Alien Meaning 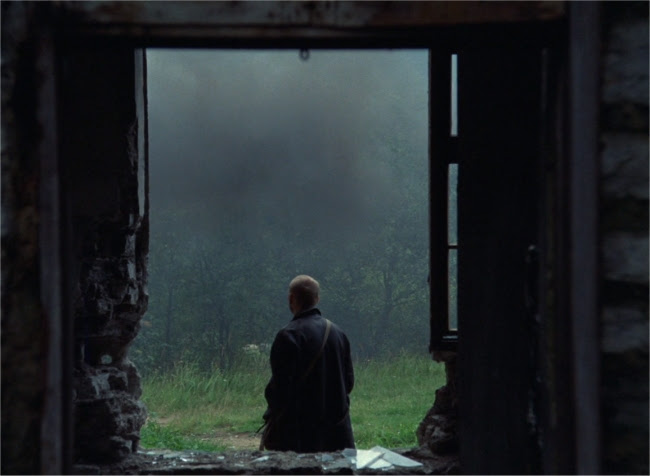 Something, possibly a meteor, strikes a populated region, rendering it uninhabitable. Military police keep the area blocked off for years and only a select few are bold enough to sneak in in 1979's Stalker (Сталкер). Andrei Tarkovsky's final film for the Soviet Union, it uses a Science Fiction concept, alien phenomena, to demonstrate the folly in attempts to regulate perception and the fear inherent in critical deconstructionism.

Why is the film called Stalker? From what I've read, Tarkovsky understood the English connotations for the term. It comes from the book upon which the film is loosely based. A "Stalker" is someone who goes into the "Zone", the area cordoned off by the government, for personal gain. The term immediately conjures criminal associations of a strangely intimate nature, of someone who invades another person's privacy. In this, perhaps, there is an attempt to control the perception of someone who would enter an area the government does not want people to enter. Just by crossing the boundary, he is to be regarded as a pervert. 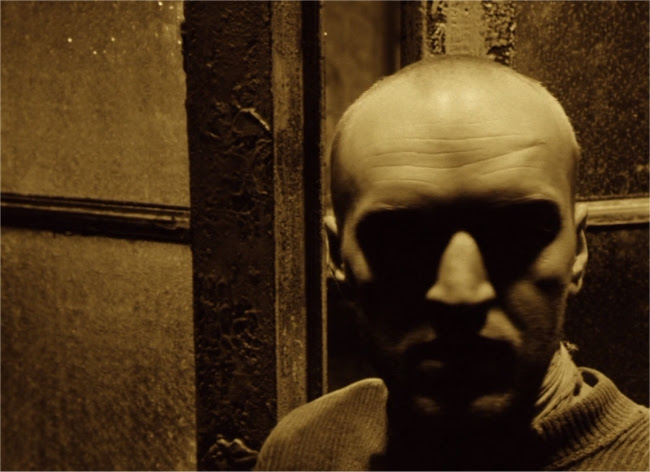 The Zone itself is open to interpretation, particularly as the government endeavours to stop people thinking or talking about it. Naturally, that only makes people more curious though apprehensive of letting their curiosity to be known. The attempt to interpret the Zone, to define its essential meaning, is at the heart of the film's drama. Some people are bold enough to pay a Stalker to take them in. 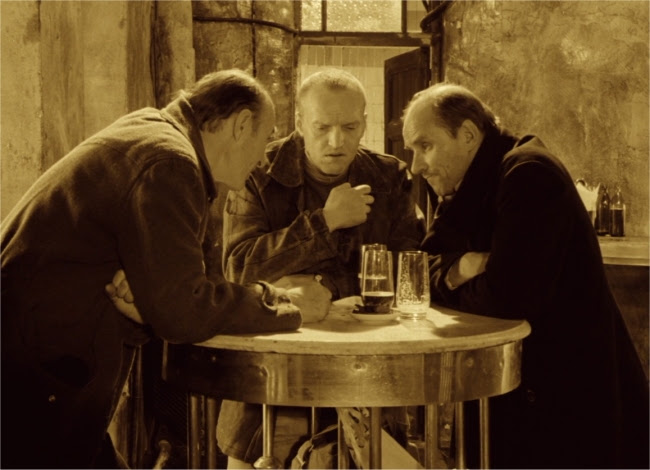 The film follows one particular Stalker (Alexander Kaidanovsky) and his task to take two men into the area, two men known only as the Writer (Anatoly Solonitsyn) and the Professor (Nikolai Grinko and Sergei Yakovlev). The Professor specialises in some scientific field while the Writer, we quickly learn, is a critic of a very particular kind; obsessed with revealing how art is a reflection of base, cruel, or ridiculous impulses of the audience or artist. Early on, he tells the old joke, recently recycled in the upcoming Wonder Woman movie, about visitors at a museum mistaking a trash can for a work of art on exhibit. For him, all impression of meaning is fodder for deconstruction and ridicule. No wonder he wants to enter the Zone, so he can be an authority on a place of such awe and mystery. 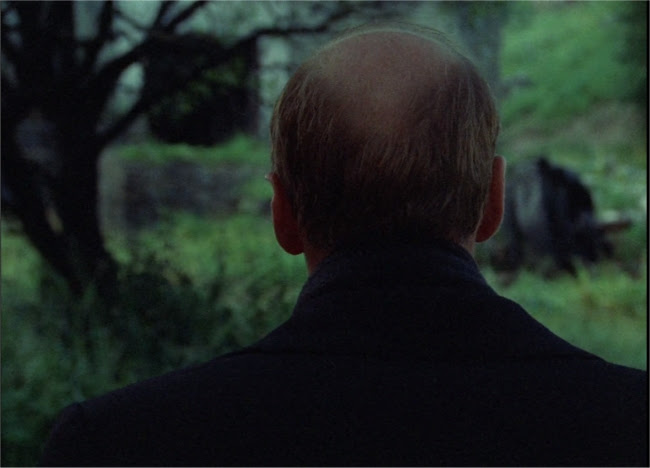 The Stalker, it turns out, is just the kind of person who'd be most at odds with the Writer's preoccupations. A devout believer with a deep reverence and love for the Zone, he's confused and baffled by the Writer's endless compulsion to deconstruct.

The Professor has no particular comments for most of the film until the climax when his intentions seem to be related to the entirely concrete, physical reality. 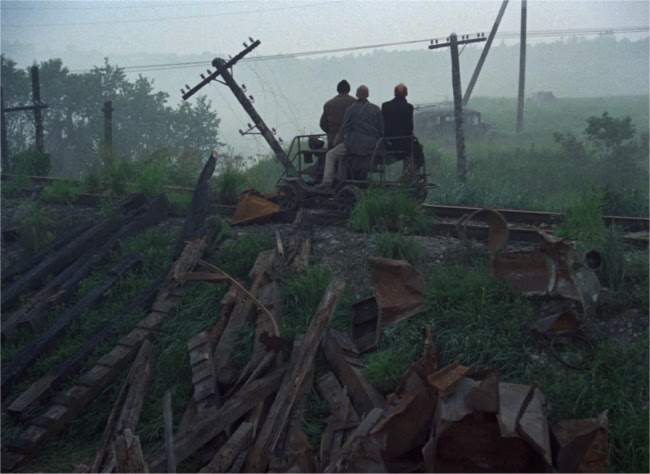 The first part of the film, outside the Zone, is shot in gold and black, sort of like John Huston's Reflections in a Golden Eye. This absence of colour, like in The Wizard of Oz, presents a fantastic contrast with the full colour footage inside the Zone. The impression is the same as the Judy Garland movie, that this strange place is bigger and stranger than normal life. You can't really make a film of H.P. Lovecraft's Colour Out of Space, as interesting as the upcoming Nicolas Cage movie looks, though you can sort of make an impression of the expanded palette that occurs with the introduction of an alien colour by reducing the number of colours in normal terrestrial life scenes. More than that, in Stalker it presents a difference between a world that has been reduced to mathematically simple interpretations and a world where the full range of sensory possibility is evident in every moment. 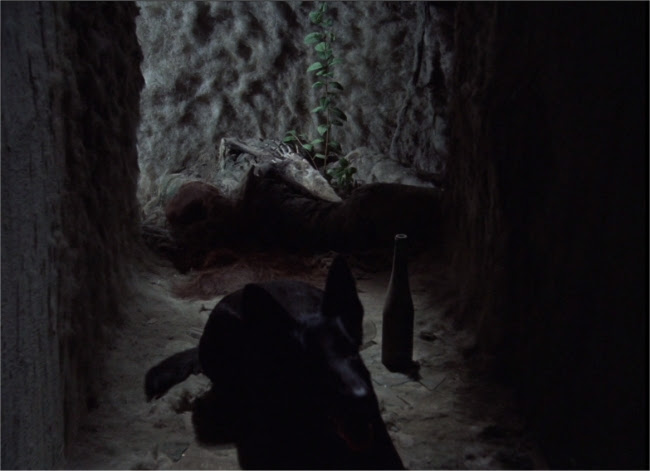 Tarkovsky shows his love and talent for composing still lives of ruin with beautiful shots of broken telephone poles amid lush foliage and shots of water gently flowing over mossy tile. 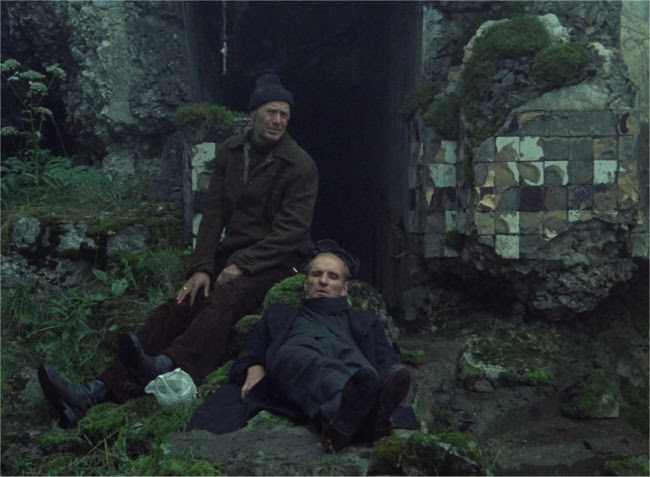 The Stalker, after reverently placing his face to the soil, clearly finding it a tremendous relief to be back in the Zone, does his job and instructs his clients in how to safely traverse the ruins. Nearly every instruction he gives, of course, is quickly dismantled by the Writer and as the three get closer to the sensitive Room, where one's deepest wishes are granted, the Writer seems more feverishly inclined to impute the Stalker's beliefs to psychological issues and the pleasure of a position of power granted by his "knowledge" of the place. Yet, the Writer is himself struck by an instinctive fear and reverence that seem to be at odds with his words, or rather, to reveal his own motive to deconstruct. 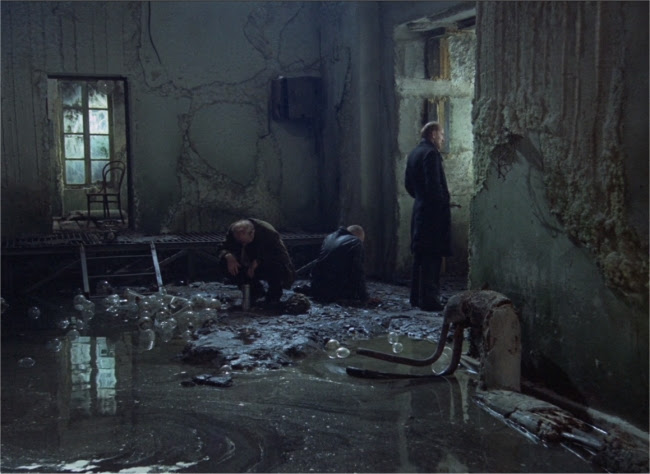 The Stalker is not unaffected by the Writer's criticisms and suffers some crises of faith. Tarkovsky wisely leaves evidence of the alien or supernatural to a minimum though, the Stalker may be comforted, the evidence is certainly there.

Stalker is available on The Criterion Channel.

Posted by Setsuled at 11:51 AM
Email ThisBlogThis!Share to TwitterShare to FacebookShare to Pinterest
Labels: andrei tarkovsky, movies, science fiction, stalker