Humans may have a problem with pollution but at least it's colour coordinated. Good thing Ryan (Tosin Cole) wore matching pants. And guest star Joana Borja wore a shirt with a Nike logo of the same colour. 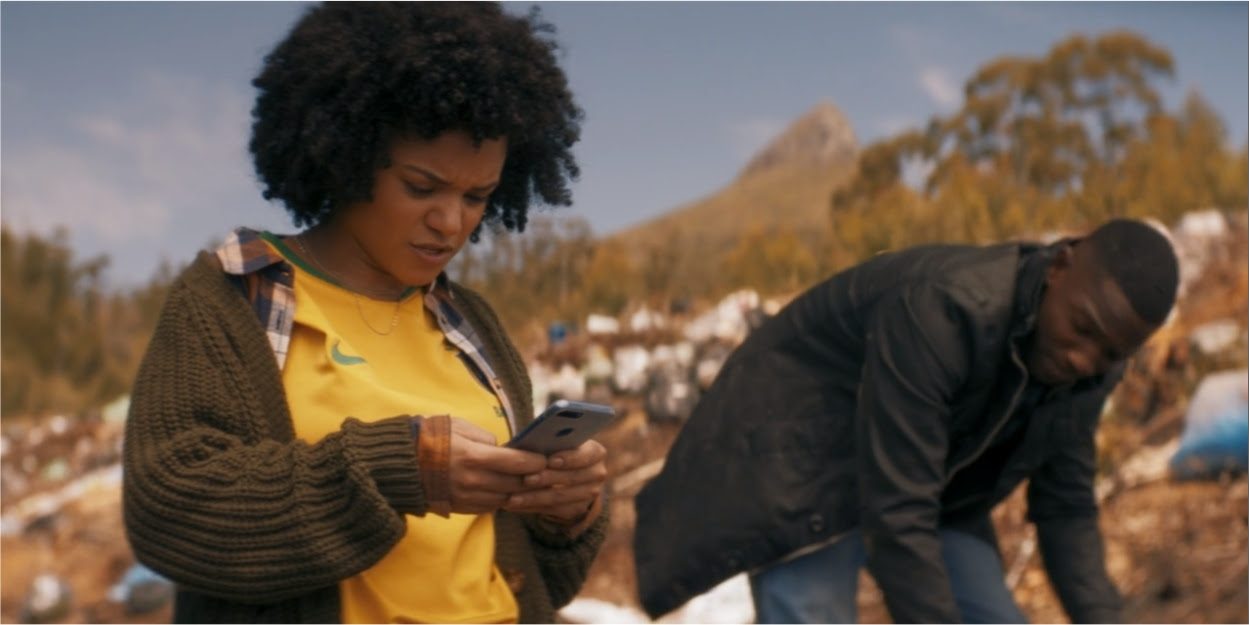 Jeez, even her eyebrows are kind of blue. Why not just leave the natural colours alone, huh?

We're introduced to Borja's character with her short-lived friend Jamila (Gabriela Toloi) who, upon seeing the garbage, says something like, "We're not camping here." And I thought, how stupid, of course they wouldn't camp there when they've obvious just walked through plenty of area free from . . .

Oh. They did camp there. But--why?

I did like how this episode used locations (actually just South Africa) from all over the world with the companions dispersed on their own missions. The people exploding from the alien disease was a nice effect--one in Peru and the other in Madagascar. The same thing "on two different continents!" remarks the Doctor (Jodie Whittaker) even though Madagascar is an island. No reason not to strand the episode's guest star companions there inexplicably at the end of the episode. Two of them are going on honeymoon but, still, why there? Meanwhile Gabriela is already all smiles and ready to joke about references to her "Two Girls" YouTube show even though her friend and co-star has recently been killed.

This week's stunt casting guest was Warren Brown as Jake Willis, a British cop taking some time off whose husband is a missing astronaut (Matthew McNutty). I'd never seen Brown in anything before and was pleasantly surprised at how good his performance is, hoping he'd take over companion duties. But at some point during the episode I gradually started to suspect he was famous for something and therefore not likely to last past the end credits. Oh, well. When he and his husband kiss at the end and the Doctor says she's a romantic it made me long again for Whittaker to be paired with someone with whom she has chemistry. Obviously the producers are aiming for a Russell T. Davies era vibe, more or less, so you'd think they'd include the thing that era is best remembered for--the romantic chemistry between Doctor and companion. But I guess they're aiming for a younger demographic.

That's what occurred to me when Graham (Bradley Wash) and Ryan admit they don't know what "pathogen" means. "Oh," I thought, "it's so there's a reason to explain it to the kids at home," while screaming patients explode. I feel like the writers could've found a way to do this without making it seem like the Doctor's travelling with dunderheads who should've gotten themselves killed by now.

A whisker showed the bed in which it slept.
For dreaming cats the day was cool and sweet.
In metal spheres the treats were loosely kept.
Magenta juice betrayed the tasty beet.
A skinny barrel twined became a shot.
A hidden box revealed a set of rooms.
A troop of pictures crowd the ragged cot.
Olympic knitters sync on twenty looms.
A kitten's eye contained a stack of bowls.
In spinning skins the frozen air implodes.
A game began without the thought of holes.
In second ticks the grassy time erodes.
A voyage copied failed to set the mood.
In densely speckled spaces bags accrued.

Posted by Setsuled at 2:59 PM
Email ThisBlogThis!Share to TwitterShare to FacebookShare to Pinterest
Labels: doctor who, television, tv show