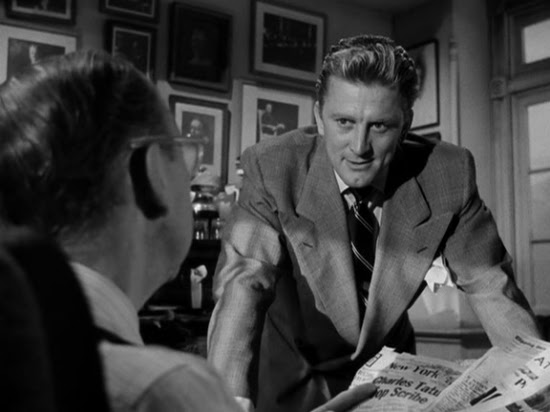 "I hate surprises myself," said Kirk Douglas in Out of the Past. It's the first film I thought of when I heard he died yesterday. He has a pretty small, supporting role in that film--it was before he was a big star. It's no tour de force performance from him, and his career is filled with those. But you can see from Out of the Past how even in a bit part Douglas could transform a film.

Some actors may have imitated him but no-one could ever be quite like him. His voice and mannerisms were distinct and yet the feelings he expressed came off invariably honest and raw. I'm going to quote one of my own reviews, for The Champion (1949). "No wire is more live than Kirk Douglas in The Champion . . . He's all tension and nerve, few other actors could convey that so well."

Equally at home as the morally complicated lead of Billy Wilder's Ace in the Hole as he was playing Ulysses and Sparticus, those fierce eyes and clear voice with which he could muster the finest subtlety and heaviest screams brought distinction to every film he was in. Who better to play Vincent Van Gogh in Lust for Life and any real artist who watches the film can't help but feel Douglas touches on fundamental truths about the commitment and torment required for genuine creative expression.

And he beat a giant squid. He could be tormented and malevolent and he could be a vulnerable, hard as steel hero. 20,000 Leagues Under the Sea would barely resemble itself with another actor in the role and while many may be understandably inspired to say, "I am Sparticus," it could really only ever be Kirk Douglas.

A careful plan removed the sunny grape.
A raisin wilts in nature's pickled time.
For metal fingers point to ore and tape.
Forever starts a silver plated climb.
A second count corrected button notes.
The triple toe creates a larger shoe.
In time, the fleet was just a couple boats.
In space, adhesive's just a tub of glue.
A stripey shirt beneath the sea was armed.
A painter's flame consumed a field of crows.
Reporter's aces beat the mine and swarmed.
His single name pronounced a thousand rows.
On steely paths the glory never dies.
Detective stories spread through distant skies.