Why You Shouldn't Enchant and Murder a King 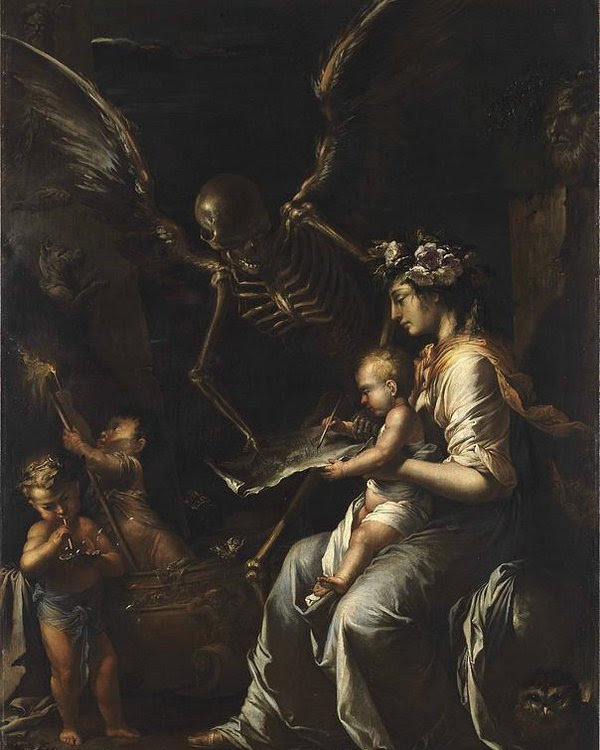 If someone took the grisliest parts of Macbeth and Titus Andronicus, combined them, and then decided to up the ante, you might end up with something like Morindos, a piece of short prose fiction by an anonymous author, published in 1609. Supposedly the history of a Spanish king called Morindos, it's mostly about the witch who marries him and the horrible fates met with by her seven daughters, each representing a different sin. It certainly lacks the complexity of Macbeth and even Titus Andronicus but it's a pretty engrossing spectacle in its way.

The story begins with the King and his marriage to a witch called Miracola--curiously close to the vampire Mircala from 1872's Carmilla. Miracola makes a hell of a fabulous entrance:

Upon a time when King Morindos, in the height of his revels, whilst some of his fairest concubines danced before him naked in their cambric smocks, the more to enkindle lust's fire, she entered the chamber of their licentious sports, with a masque of wonder, the like never seen in the prince's court; for all the masquers, except herself, were infernal spirits, visible but not tangible, all in the shape of young ladies, attired in more changeable silks than the colours of the rainbow, herself in a robe of such richness as it seemed to exceed the glory of the sun for brightness.

She enchants the King and after some fornication she causes him to go blind, deaf, and unable to speak, "as a bear new-whelped, like a lump of flesh without fashion." Like Macbeth, Miracola receives a prophecy that makes it sound like she's invulnerable, but it turns out the specific interpretation fate has for the prophecy means it's actually of her certain doom, though fate is a little less creative here than Macbeth's witches; she's told she won't die until the seven days of the week have been forgotten, which somehow turns out to mean she won't die until her seven daughters are dead. The rest of the story consists of vignettes of each daughter's death, each in some way representative of one of the deadly sins. The one representing Pride, Sola, is beautiful at first but then becomes hideous. When she tries to claw off her diseased skin it drastically backfires because "the envy of heaven , clothed with red vengeance, had doomed her to a miserable death, for neither art nor nature, by any practice, could ever after cover her hated body with any kind of skin, but that all her flesh continued raw and loathsome and putrefied unto her bones.". The next daughter, Lucina, representing envy, is unable to bear children so she bakes someone else's baby into a pie and feeds it to them. It's all quite decadently horrific.

And the moral of that story, as the Duchess from Alice in Wonderland would say . . . is sometimes things are really horrible.

Triangle traps escort the learned babe.
Enchanted eggs disrupt the oven mitt.
Advancing ships were gone by astrolabe.
For thinking thoughts it often helps to sit.
A turtle mocked could tell of lobster things.
A dancer brought could bring the sandy stuff.
A busy shore adorns the edge and sings.
To teach a tortoise less is often rough.
Flamingo finish shone on cards in place.
The absent twins appeared in coffee dreams.
In hotter sequels stirred with plastic grace.
Reflections changed between the glassy seams.
The audience abides in comfy seats.
A metronome replies in counted beats.