It'd be kind of interesting to know who Jodie Foster would be trying to impress if she shot someone. I was weirdly hoping this story about Foster assaulting a paparazzo would be a tale of a hardcore brawl, but it sounds like just a standard scene of a paparazzo being a douchebag to a fatigued or emotionally vulnerable star, like Bjork's famous incident;

I would totally cheer on Bjork or Jodie Foster in a street fight. I don't why, I just want to see these ladies doing violence. 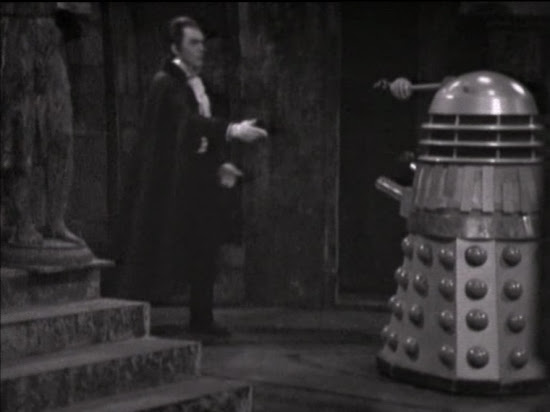 I'm four episodes into the second season Doctor Who serial, "The Chase". So far I'm mostly finding it to be an exceptionally good serial. I like that the writers' are unafraid to use Daleks for comedy, and I continue to be charmed by the innocence of The Doctor and his companions. How many people, upon finding themselves on a strange desert planet with two suns, would decide the thing to would be to go exploring unarmed and without provisions or to sunbathe? Meanwhile, in the "Space Museum" serial, the characters immediately hid from every person they saw, always assuming they'd all be hostile.

Anyway, I loved The Beatles appearing on the television in the first episode of the serial, and I realised Vicki referring to a monument dedicated to them in the future and their work being considered "classical music" wasn't far fetched at all, and turned out to be curiously prophetic.

The serial's been good, especially the "Flight through Eternity" episode, despite the phoney American accents and the tedious redneck stereotype on the Empire State Building. But "Journey into Terror" was a bit disappointing--I liked The Doctor's explanation of the presence of Dracula and the Frankenstein monster as being evidence of a place populated by human nightmares. It was better than what was revealed to actually be the truth at the end--that it was a carnival haunted house--which didn't make any sense since the Daleks' weapons had been useless against the monsters.

I decided to put off inking the third page of the next chapter until to-day when my thumb had finished healing, so I ended up playing a lot of chess. I rather wish I'd just watched movies, as I lost, and lost, and lost again. Then to-day, while eating breakfast, I decided to see if I'd do better when I wasn't drinking sake at the same time, as I was last night. Nope. Lost two more games to someone I'd just met. I obsessively keep going back--I respond to negative stimulation. I'm like one of those inflatable peanut people that bob back up every time you punch it. It's a really lucky thing I'm not into gambling.