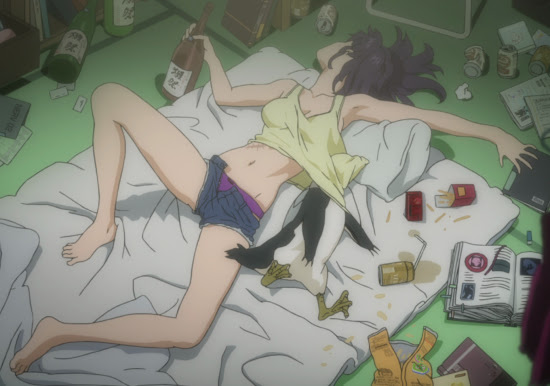 Last night I finally had a chance to watch the second Rebuild of Evangelion film, You Can (Not) Advance. It's a good movie, though I found myself preferring the original series--You Can (Not) Advance sort of feels like The People's Evangelion. Fans who were put off by the characters' psychological issues and who enjoyed the action sequences more will find this new film to be a vast improvement. To me, this new movie is like a good, if divergent, adaptation of a far superior book.

Unlike the first film, which was a sort of condensing and streamlining of the original series' first six episodes, You Can (Not) Advance is almost a totally different story proceeding from the end of the first film, which conceptually I rather like. Instead of trying to replace the original, it's a new story with the same characters, coming from a different perspective on life. I think it reflects director Hideaki Anno's greater sense of self confidence and emotional stability as compared to his mental state when making the original series, which is perhaps why it comes across as less interesting to me. It also feels like Kazuya Tsurumaki, assistant director on the original series and director of FLCL and Top o Nerae 2, had a more prominent role, as the focus on action and momentum in character development is strongly reminiscent of those two series. The original Evangelion series was very insular, typically focusing on one character at a time, usually Shinji, with the actions of the other characters serving to illustrate something about the focus character. The new movie seeks to develop all the characters simultaneously with the same level of focus, which makes it a more traditional, audience friendly perhaps, sort of story than the isolation of points of view in the original series.

A good example of the contrast is a scene where Asuka sleeps in the same bed as Shinji. In the original series, Asuka and Shinji are forced to stay as close as possible for a while because they need to learn to work in synchronisation to defeat a certain Angel, they even have to sleep side by side. When Misato, their caretaker, is out of town one night, the two decide to take the opportunity to sleep in different beds for once. However, in the middle of the night, Asuka gets up to use the bathroom and in her half awake state accidentally drops off to sleep next to Shinji, much to Shinji's evident surprise. The fourteen year old boy feels simultaneous anxiety and arousal at seeing a lightly clothed girl his own age innocently unconscious beside him. He starts to move closer, thinking he might try to kiss her, until she whispers the word, "Mother," in her sleep and he turns away, sleeping guiltily on a nearby space of bare floor.

In the new movie, the two aren't required to do the synchronisation training, and Asuka's alone in her bedroom one night when she decides she's lonely. So she goes to Shinji's room and surprises him by laying down beside him, though she tells him not to look at her. She asks him about his reasons for piloting the Evangelion, and he talks about his desire for acknowledgement from his father, which is material that's already been covered. Meanwhile, the camera crawls over Asuka's body for some gratuitous fan service not from Shinji's point of view, as his back is still turned.

The original scene, although it alludes to an issue Asuka had with her mother which would be developed later, was really very much about Shinji. Both the old series and the new movies have a lot of self-conscious fan service (the ending trailers of both amusingly feature Misato outright promising, "There'll be lots more fan service next time, too!"). Fan service, like a lot of aspects of fantasy fiction, usually requires unlikely circumstances. Though it's possible Asuka would accidentally fall asleep next to Shinji, it's unlikely, and needed the prompting of the really unlikely circumstance of two fourteen year-olds needing to go through synchronisation training to kill a massive, murderous Angel. But the important thing is that the characterisations held together, and were developed by the circumstance. It was an unlikely situation, but Shinji behaved believably and interestingly in it as a sensitive, insecure teenage boy.

In the new scene, it's more about Asuka's character, and in a rather clumsy way as it's hard to imagine what she referred to as an uncharacteristic moment of loneliness would cause the fourteen year old girl to crawl into bed with a boy she barely knows, and with whom she had earlier expressed discomfort at having to live with. Ultimately, the scene seems to exist now entirely for fan service. 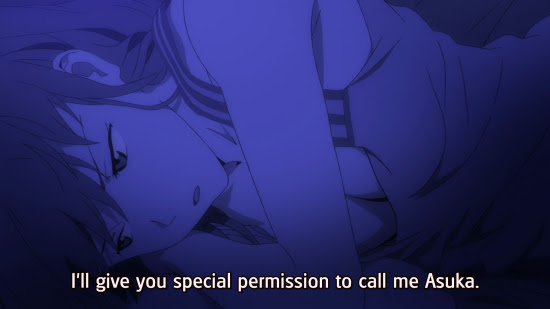 Both Rei and Asuka, Evangelion's two female characters the same age as its male lead, Shinji, seem far more attracted to Shinji and reflective of the fetishisation of young women that's more characteristic of modern anime than the fetishisation of young women in anime of the 80s and 90s. Although the anime of previous decades pioneered the "harem anime", series featuring one male lead with a number of girls fighting over his affections, there's less interest nowadays in making the girls intellectual equals of those boys or believable characters at all, which may be reflective of the fact that a lot more anime is being produced nowadays--as formula has to suffice in place of writing, there are consequently more fictional girls with sort of dumb, sexy affection, hastily cobbled together from bits average writers remember being attractive or think fans find attractive. 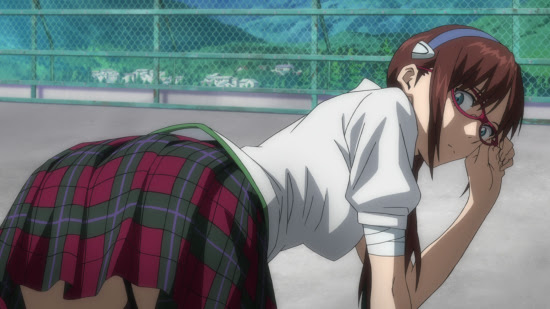 Obviously, Anno and Tsurumaki aren't of this new crop, but they seem in this new film to have picked up some of the new bad habits. This is particularly evident in Mari, the brand new "glasses girl" introduced in the movie, parachuting in what looks like a catholic school girl uniform to land on Shinji and smother his face with her breasts. Once she collects herself, she starts to sniff him, and tells him he smells good. She's cute, but she's barely a character, particularly not compared to the fascinating characterisations that made the original Evangelion series so brilliant.

Rei is practically a totally different character now than she was in the series, and from the way Megumi Hayashibara voices her, it's obvious one or more of the directors sat down and talked with her about taking the character in a totally new direction. Instead of the strange, quiet girl whose capacity for individual thought is mysterious for almost the whole series, Rei is now outright sweet. She has one of the inexplicable fan service moments when she freaks out about some miso soup Shinji gives her, prompting a new subplot in the film of the girls cooking for Shinji. 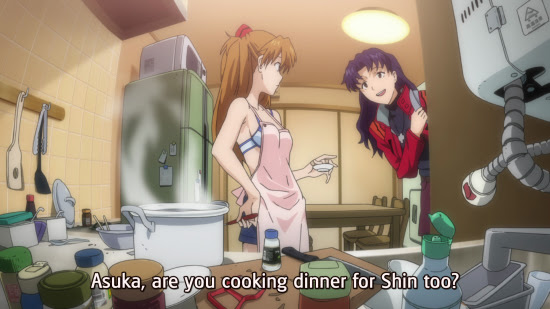 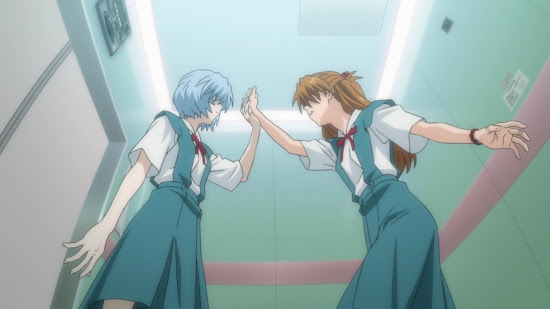 But Rei's also more assertive. A scene from the original series where Asuka accuses Rei of being no more than a doll is somewhat incoherently replicated in the new movie as Rei is now very clearly not merely a doll.

It's eventually revealed in the series that Rei is a tweaked clone of Shinji's deceased mother, and in the new movie, she comes across as almost being an exact clone of Shinji's mother, which makes the romance that builds between them slightly more disturbing. I found it to be one of the most interesting aspects of the new film, and it takes on an even more grandiosely perverse resonance in the climax.

Although the new movie extremely disappointed me in skipping over a couple of my favourite Angels--Gaghiel, the aquatic Angel, and Leliel, the Angel whose body is its shadow, a Dirac Sea--some of the best parts of the new movie were in its explorations of Angel weirdness. Though I found the generally less impressionistic quality of the new movie's visuals inferior to much of the series, the new movie is definitely more about visuals, and the Angels exemplify them. The Angel Sahaquiel has a less interesting, cgi body in the new movie, but I loved how its death released a tsunami of blood onto the city. 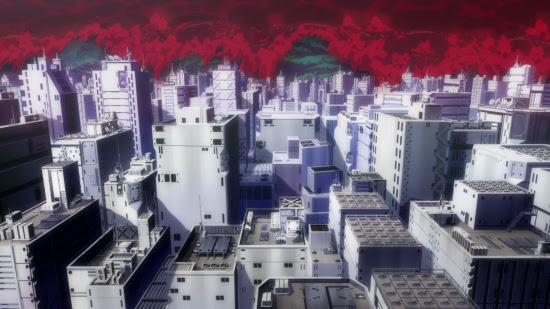 I also liked the idea of the post-apocalyptic world's oceans turned to blood, and the tiny square of reproduced ocean. 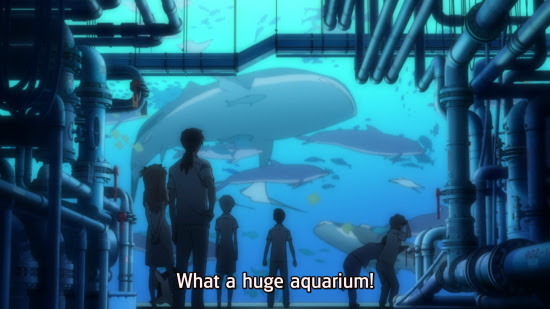 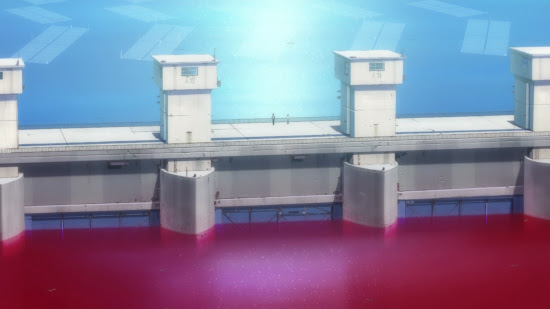 But the best Angel is at the end, when Zeruel devours Unit 00 and Rei with it to generate a new body/appendage that begins as something resembling a flea's abdomen and transforms into an enormous female, humanoid body. 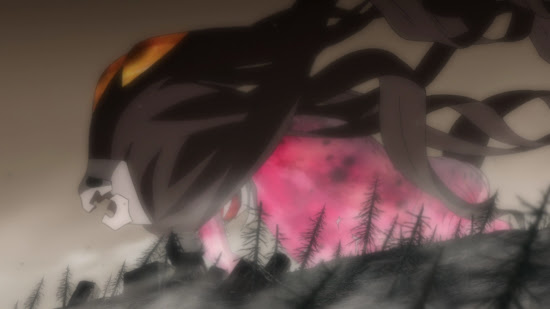 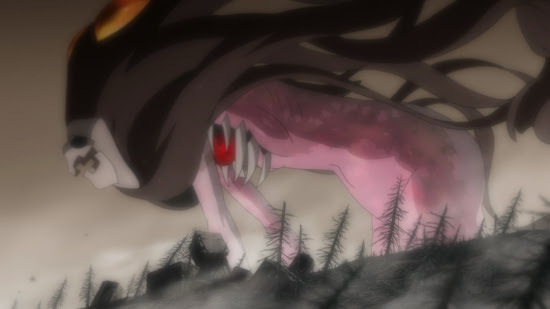 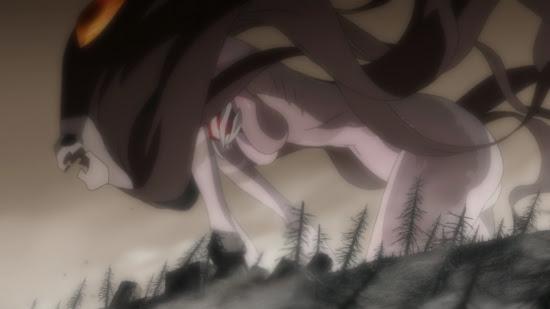 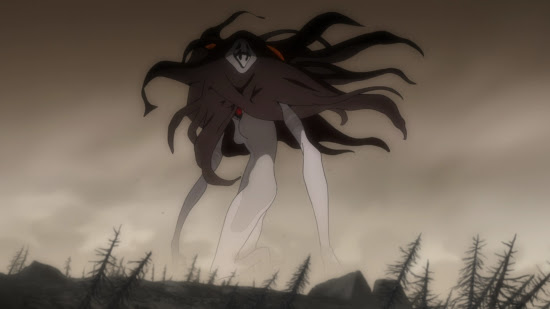 Which of course radically changes the impact of Shinji ripping it apart with Unit 01, even more so as it's revealed his father, Gendo, wanted it to happen, and it's indicated the resolution, where Shinji reaches through some kind of meta-space to pull Rei out of the Angel, is also according to his plan. So the father clones the mother, feeds her to a monster (angel), and hopes the son will both kill her/it and have a sort of really intimate, connexion sex with her/it. Enjoy the clusterfuck of disturbing subtext. I know I did.

But, while Anno had developed a dislike for Otaku culture when working on the original series, with this new film, he mostly seems to have embraced it. It's not quite like Star Wars remade with Clint Eastwood putting one right between Darth Vader's eyes and flying off into the sunset chomping a cigar, but it leans more towards that than the original series. Shinji's insecurities and psychological issues, which were at the centre both of the original Evangelion and of otaku complaints about it, are largely gone. Anno and Tsurumaki have given otaku culture what it thinks it wants.

I think part of the greatness of Evangelion and the original Star Wars series is that both saw through the otaku/geek culture obsession with big, awesome weapons and steely heroes to the sensitive people who fantasise about such defence mechanisms. They managed to present the truth with a suitably awesome vessel, granting catharsis without forcing its audience to open up with their feelings to a doctor or priest. So, while it is good, I don't think You Can (Not) Advance will have quite the longevity of the original series. 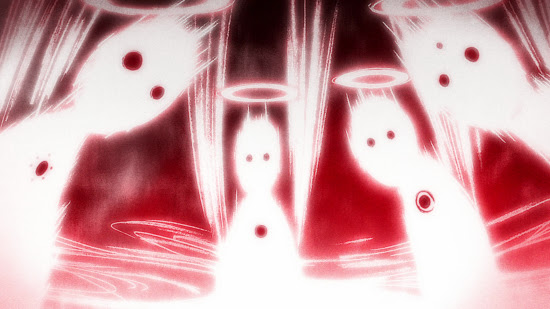