Pale cubes are condensed to packing peanuts.
Police in Germantown are far from home.
Green cesspools hide under discreet kleenex.
Bob's Big Boy lives thanks to a new genome.

This is the character I beat Fallout 3 with; 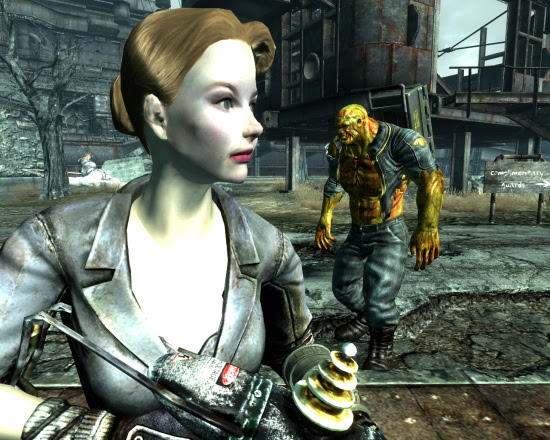 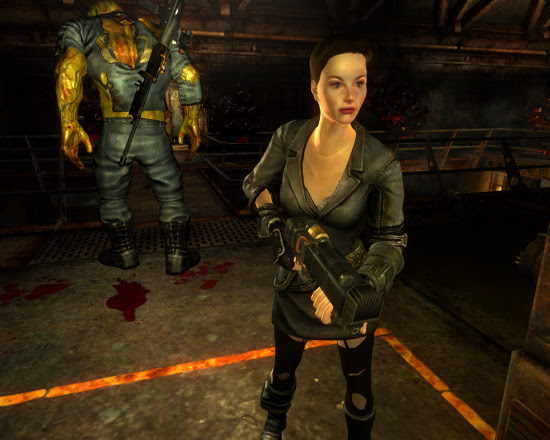 Her name's Ingrid, and I modelled her after Ingrid Bergman, somewhat more successfully, I think, than in my previous attempts to make Ingrid Bergman characters in Oblivion and Fallout 3. The Hulk looking guy in the background is Fawkes, my super mutant companion, who, as you can see, is perfectly fine after walking into the heavily irradiated chamber.

At the beginning of the game, one chooses three "tag" skills to level up in, and for Ingrid I picked Medical, Energy Weapons, and Speech because they were all skills I hadn't previously explored much in the game. I also ended up levelling up in Science, which is mostly just used for hacking into computer terminals. Which can be interesting--although the game's dialogue is usually pretty bad, it is cool reading personal, science, and medical logs of various characters. I killed a bunch of Enclave field scientists last night and read on one of their computer terminals about their attempts to classify mutated wildlife, including the Mirelurk, the Order, Family, and Genus of which were given as Scylla serrata horrendus.

Reading The Odyssey lately, I can't help thinking what a great Quentin Tarantino movie it would make. The time spent detailing Odysseus' back story and in establishing his badassery reminded me of the sections devoted to members of the Basterds or The Deadly Viper Assassination Squad. And the climactic slaughter in The Odyssey would be right at home in a Hostel movie.
Posted by Setsuled at 5:25 PM
Email ThisBlogThis!Share to TwitterShare to FacebookShare to Pinterest