I couldn't find anyone to play chess with last night. It figures, once I started winning games, suddenly the pool of people who want to play me dries up. So I played Fallout 3 last night instead, the Pitt expansion, which takes place in Pittsburgh, which has become a an ammunition manufacturing centre operated by slave labour. The plot was really weak, involving some kind of skin wasting disease the slaves wanted me to get a cure for from the guy in charge of the slaves. So I infiltrated their organisation following a plan concocted by a leader of the slaves and when I got to the lab I discovered the cure was actually an infant. I thought to myself, "I wonder if the slaves know me taking the cure involves kidnapping a child?" I went outside to ask them, but this somehow triggered the branch of plot that had me siding with the slavers and all the slaves turned against me. By the end, I was seriously missing Fallout 2 again, and actually tried to install it, but the backup copy I had on my iPod wouldn't install properly. I suppose I need to hunt down my disk . . .

The Pitt looked kind of cool in places. The steel mill had a sort of Nine Inch Nails music video or Blade Runner quality with a bunch of white mannequins everywhere for no apparent reason; 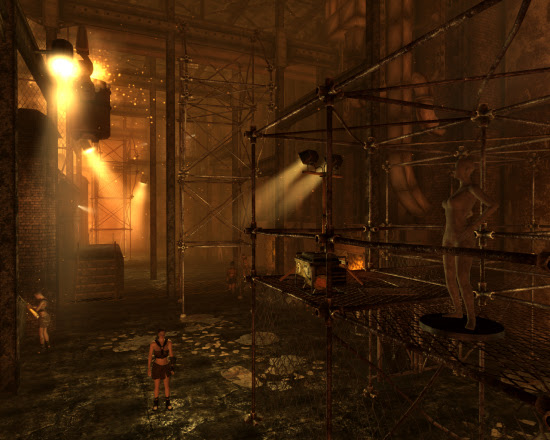 Posted by Setsuled at 4:17 PM
Email ThisBlogThis!Share to TwitterShare to FacebookShare to Pinterest