My sister just called to tell me a bit of news she knew would put a smile on my face; Thomas Kinkade has been arrested for DUI. Ah hahaha! Just look at this fucking douchebag; 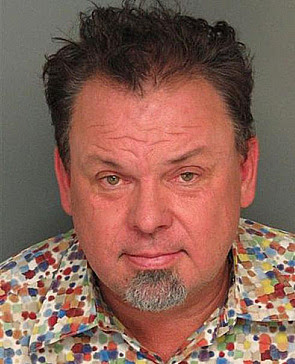 His fucking Eddie Munster hair and dipshit goatee. Painter of light in fucking deed. His shirt looks like Austin Powers cut open his wrists on it. Thomas Kinkade, to me, is the embodiment of how fucked up this world is when it comes to art. Millions of truly talented artists can barely get by while this cocksucker makes a mint off soulless tripe not fit to print on toilet paper. And he acts like a fucking asshole, too;

He has been sued by former gallery owners who say they lost everything trying to sell his prints in their now-defunct stores. And a pair of stories published in the Los Angeles Times in 2006 recount incidents in which an allegedly drunk Kinkade heckled illusionists Siegfried and Roy in Las Vegas; cursed a former employee’s wife who came to his aid when he fell off a barstool; and palmed a startled woman’s breast at a signing party in Indiana.

Well, this one's for you, shithead. Though from the sound of things, you're already eating your own heart out. Sometimes it's nice to hear about how big time users really are suffocating from the inside. Howard Stern's been complaining about Elton John playing Rush Limbaugh's wedding for a million dollars. I wanted to say to Stern, "Yeah, but look at it this way--you didn't have to pay anyone a million dollars to perform at your wedding. People performed at your wedding because they wanted to." I sleep a little better thinking maybe the hustlers are choking slowly on all that cash.

In honour of this motherfucker's disgrace, I'd like to repost again one of my favourite Comic-Con stories. This is from one of my 2008 Comic-Con Reports, where I saw Ralph Bakshi's panel;

He told a story about working on his film Fire and Ice that was one of the best things I'd ever heard. Fire and Ice was a collaboration between Bakshi and Frank Frazetta, and Bakshi talked about how Frazetta, a man in his fifties, demonstrated to the movie's stuntmen how to do some of the more arduous stunts with more energy than any of the stuntmen demonstrated. Bakshi also mentioned how Frazetta carried all his paintings around with him in a trailer.

Painting backgrounds on the movie were a young James Gurney and Thomas Kinkade. Apparently, according to Bakshi, they learned all they knew about painting from Frazetta, which is hilarious in itself. "Kinkade makes a lot of money off garbage now," said Bakshi, at which point the room applauded. "But I will say this for Kinkade; he was the greatest hustler I ever met."

He described Kinkade constantly coming into his office and demanding more money, and they'd get into really heated arguments partly because, as Bakshi said, Kinkade "didn't like Jewish guys from Brooklyn" (Bakshi's a Jewish guy from Brooklyn). Finally, one day Kinkade tells Bakshi he and Gurney have to hitchhike across the country. "What d'you mean you gotta hitchhike across the country? We're making a movie!"

But Kinkade eventually wore Bakshi down, and he and Gurney went from town to town getting their pictures in every local paper, talking about the movie and how they were the great artists. When they got back to Los Angeles, Bakshi said Kinkade, "told me he needed a raise. I said, 'why' and he said because he's famous now."

Paper explodes under a plastic fist.
Small moist merchandise shrinks on the goat's shelf.
With the wave of a hoof, bridge crew's dismissed.
Spock was eaten by a cannibal elf.
Posted by Setsuled at 8:59 PM
Email ThisBlogThis!Share to TwitterShare to FacebookShare to Pinterest