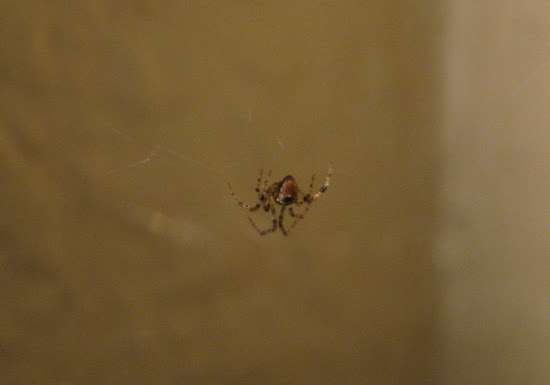 I saw this extremely tiny spider in my bathroom last night, in a corner, on its own small web. The spider was just slightly larger than a large grain of sand. 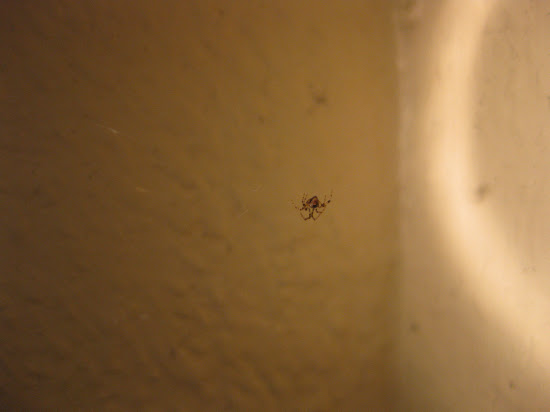 For some time now, Roger Ebert's been engaged in a debate as to whether or not video games can be art. He says they can't be, and as much as I do like video games, I've tended to agree with him--I thought video games could contain art, in the form of visual design, and in dialogue and plot outline, but all these things can only exist in the game separate from the very thing that makes it a game; player input. It's possible to appreciate both story and design in a game without actually playing the game.

Most movies take a lot of people to make, but the director shouldn't be subject to a committee, a movie shouldn't be a democracy. With very rare exceptions diluting the focus of an artist's vision waters down the end product for the simple reason that the thing within the artist which drives him or her to make the art can, in the end, only be expressed as the art. That's why the episodes of Twin Peaks not directed by David Lynch aren't nearly as good.

A video game is dependent upon a player's input so it can never really be art. It could be a sort of weak hybrid, at most, but never really art.

That was my opinion up until I played Robot Unicorn Attack for three hours yesterday. 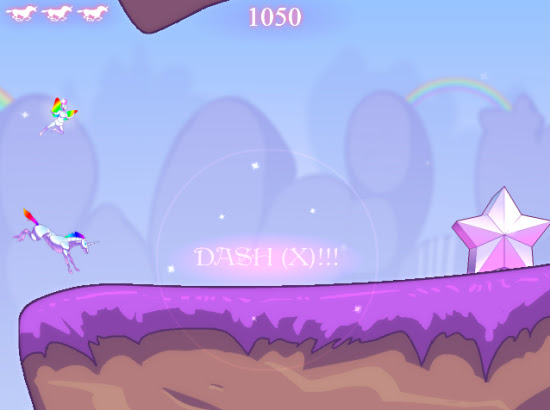 In the way of a lot of current post-modern humour, Robot Unicorn Attack's premise seems like a joke without a punchline, where the lack of punchline is in itself a punchline, a sort of illumination of the inherent ridiculousness of the human mind. But that's something one can appreciate without really playing the game. That act of playing the game conveys a more rewarding impression.

The game consists of a running robot unicorn (you) that cannot be stopped--there are only two controls; jump (z) and dash (x). You jump over pits and dash through metal stars that cause your death otherwise. All the while, "Always", the synth-pop ballad by Erasure plays on a loop.

My first instinct is to say that "Always" is a bad song, but I have to admit there's nothing objectively wrong with it. The only reason I wouldn't like it is because it presents a simplistically gentle view of love that I can't relate to. But it's arranged well enough that it does actually survive continuous play.

When combined with the automatic pleasure one feels when "defeating" the metal stars, I actually started to find myself invested in the song. As the game progresses, the unicorn moves faster and faster, and the game quickly gets harder and at the same time more exhilarating. After a while, happily squealing, shimmering dolphins arc across the bottom of the screen.

And as I died over, and over, and over again, the simultaneous encouragement and garishness of the visual and aural aesthetic came together. It conveys a personality--someone with big, impossible dreams who continually fails, but cannot stop, and every attempt brings more failure and destruction. In a way, it could be a metaphor for humanity.

The comments section at YouTube for the official video for "Always" features a passive aggressive argument between Adult Swim fans uncomfortable with emotions trying somewhat confusedly to gain ground with homophobic jabs while fans of the song try defending it, one of whom even seems to uneasily find the game lovely. What's great is the people hating the song can't actually point to anything in Robot Unicorn Attack that really insults fans of "Always", while the "Always" fans must feel an indefinable discomfort with the game, simply for the context in which it is found.

The Wikipedia entry for the song mentions the game;

The song is featured in the "Robot Unicorn Attack" flash game on Adult Swim's website. It is a simple side-scrolling platform game where the player controls a robot unicorn and helps it jump across platforms, collecting fairies and smashing through stars to earn extra points. The environment is a fantasy landscape consisting of purple grass, rainbow effects and flying sparkling dolphins. A few reviews comment the song complements the game well and plays a large role in the game's success. The game has over 24 million plays on adultswim.com

Which sort of reminded me of Christian Bale's embracing of the techno remix of his infamous on-set rant--a little sadly imperceptive.

Robot Unicorn Attack conveys the nature of human dreams as being both essential and perhaps impossible and fundamentally illusory. 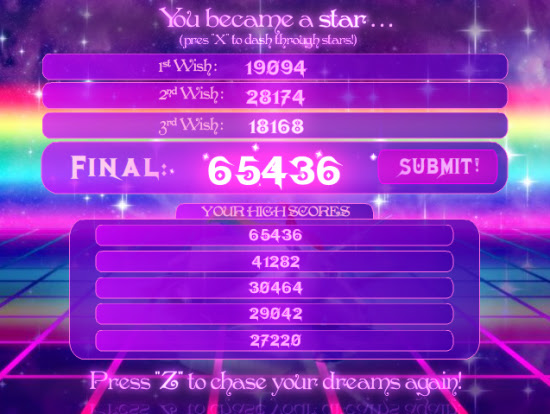