A Nebula Hatches a Spider 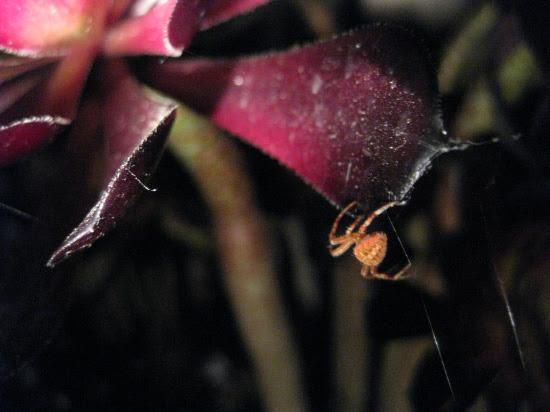 I saw a little orange spider on plum coloured petals I really wanted to get a good picture of last night. I took a bunch of pictures, but thanks to my damned unsteady hands only two stills aren't blurry. Of course, the fact that I was holding a flashlight in the other hand didn't help. Here's the video;

Music is from Miles Davis' Sketches of Spain album.

With breakfast lately, on those rare days when I'm not colouring the pages of comic from the night before, I've been watching Cowboy Bebop again. It's a series that seems to get ten times better every time I watch it. I love how ominous the last four episodes are, how you start to get this vibe of an inevitable end. The first sign is the cancellation of BigShot, the bounty hunter show the main characters all watch, which is established in just a brief, humorous moment. Then Ed and Ein leave, and Faye tries to leave. The subplot about Faye's forgotten life, before the Earth started getting bombarded my meteors regularly, is a nicely done little piece of melancholy. She was put in stasis after an accident as a teenager and awakened decades later with only partial memories. For some reason I really love the image that keeps coming to her of the moon through a cracked window, which we eventually find out has to do with the fact that she was on a space shuttle that fatally malfunctioned.

The idea of her attempting the impossible by trying to reconnect with an old, sure path in life that she can now only barely remember and her personality has practically no connexion with is really well developed. I love the part in episode 24 where she runs up a familiar path to find just the vacant lot of where she thinks her home used to be.

Mostly what all the departures and the general sense of "ending" feel like is this actually very well realised, three dimensional fantasy future created for the show is getting narrower, eroding away to the end when Spike's need for vengeance clenches his fate. Spike's drive for revenge suddenly coming into focus and Faye's sudden need to establish a new, permanent place for herself on the Bebop very nicely and painfully seem to convey the nature of death. 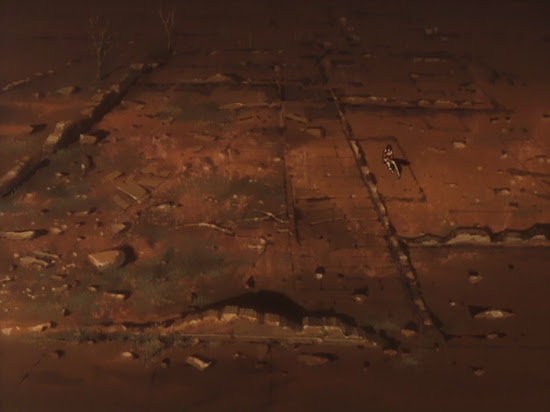