I sure miss the fourth Doctor.

I gorged myself on gummy bunnies and Doctor Who yesterday, watching one of the surviving episodes of "The Daleks' Master Plan", the first episode of "The Tenth Planet", and the last two parts of "Mawdryn Undead". Which was a good serial, oddly complicated. It felt like three serials mashed into one--a serial about the Black Guardian mixed with a serial about some ancient space vampires mixed with a serial about Brigadier Lethbridge-Stewart endangering everyone by meeting his past self. 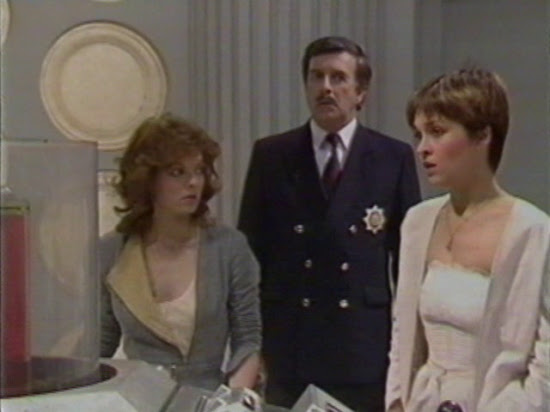 I guess it was nice seeing the Brigadier again. Though, since the part in "Mawdryn Undead" was originally written for Ian Chesterton, it rather didn't feel like the Brigadier, more like the actor who played the Brigadier playing another character entirely.

The multiple layers of story worked well I thought--the show never felt like it was on autopilot for a moment. I loved how the undead guys panicked when they realised there were two Brigadiers and switched in a moment from being villains to being genuinely concerned for the Brigadier. Maybe the complicated plot helped prevent the writers from getting any of the characters in a Master type rut.

It's nice seeing Nyssa wearing different outfits for each serial. It's weird how the Doctor and Tegan wear the same clothes in every episode. The third and fourth Doctors weren't like that, and neither were their companions, except Leela, and there was at least a logic to that.
Posted by Setsuled at 5:28 PM
Email ThisBlogThis!Share to TwitterShare to FacebookShare to Pinterest