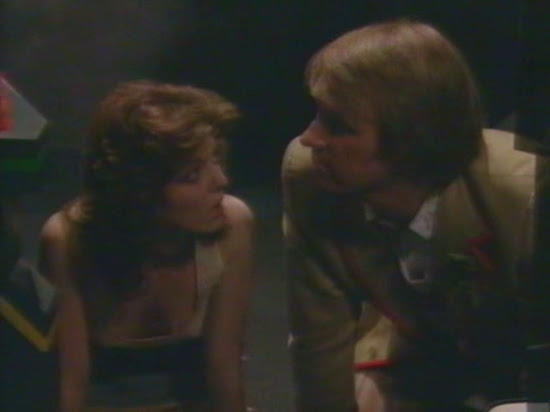 I love when the Doctor's female companions don't wear bras. On Wednesday I finished watching "Terminus", the last serial to feature Nyssa, and actress Sarah Sutton seemed game to make Nyssa's last appearance as memorable as possible. From the Wikipedia entry;

* In this serial Nyssa drops her skirt in part two for no apparent reason and remains in a slip for the remainder of the story. According to the script she was feeling ill and trying to loosen the pressure on her stomach, but this is not clear on screen. In an interview for the book Doctor Who 25 Glorious Years, Sarah Sutton, who played Nyssa, suggests it was deliberate Fan Service:

'I still smile when I remember how the Production Office kept getting letters of complaint about Nyssa being too covered up. So that's why when I left the series in "Terminus" I decided to drop my skirt as a parting gesture to all those fans who had written in. 'Mind you, it caused such a stir at the time, and as I'm still being asked about it when I am interviewed, I'm not sure it was a wise thing to have done!'

From where I'm sitting, it was very wise. 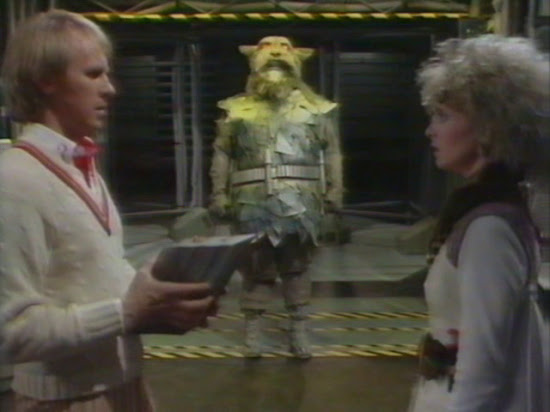 And it was a good serial in other respects--I loved the mythological feel of these sickly guys in skeletal armour at the centre of the universe conveying the dying to the care of this strange, tall, wolf headed guy.

I'm also liking the new male companion, Turlough, a lot better than Adric. The fact that the actor's giving a much better performance is certainly a big part of it, but I also rather like the idea of a companion who's a bit morally sketchy.

Later on in England, Prince William and Kate Middleton got married, and I stayed up too late watching it live and snarking about it on Twitter. I applaud Prince William for not wearing a toupee, but he's got a really weird hair situation now. I suppose he'd probably look really strange if he shaved it all off. Maybe he could get away with wearing a steel skullcap like Merlin in John Boorman's Excalibur.

I was also up late playing Fallout: New Vegas. Since I cancelled my World of Warcraft subscription, New Vegas has very easily taken over the video game slot in my heart. For those wondering why I didn't watch a movie last night, the past couple nights I've been trying to get through Tom Jones, but it's hard because it turned out to be really lame.
Posted by Setsuled at 5:31 PM
Email ThisBlogThis!Share to TwitterShare to FacebookShare to Pinterest