Now that it's hot again, I've been seeing lizards all over the place. There's one trapped in the garage now--he dashed behind a cabinet before I could get a picture. He's missing his tail, I suspect it was most likely captured by Snow. I did get a picture of a lizard at school last night; 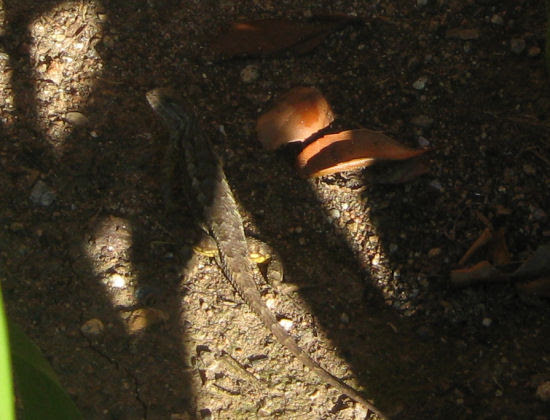 I guess it hardly seems worth posting when I've gotten much better lizard pictures in the past. In case anyone's wondering, I did submit two anonymous sex questions I was "afraid to ask." The teacher read them along with all the others. They were;

When my girlfriend and I are having sex, I like to call her "Klondike Bar". Does this mean I hate women or does it depend on what I'm willing to do for her?

I had sex with Lars Ulrich backstage at a Metallica concert. He kept calling me a "dirty little Napster" and he kept my underwear because he said he wanted me to know how it feels. Is it okay if I still download music?

I got a good laugh from the class, which was nice. I love when I get validation for my pranks.

I finished "Four to Doomsday," the Doctor Who serial, yesterday. I read on Wikipedia that the showrunners were trying to take a "back to basics" tact, attempting to avoid much of the humour or the horror elements of the Fourth Doctor serials in favour of more straight Science Fiction. And so far it has felt slightly like watching First Doctor episodes, though what I'm appreciating most right now is Peter Davison's performance. It could be my imagination, but it seems to me that there's a subtle, organic evolution to the Doctor's character. Each regeneration seems to retain something from the previous incarnation that hadn't been there before--the Third retained the Second's warmth, the Fourth retained the Third's ease of manner, and the Fifth seems to have retained some of the Fourth's, I guess you might call it, affable silliness.

I love how he chewed out Adric for being such an easy turncoat. That's something I don't think I've seen since the Third Doctor. I also liked Nyssa's trick with the sonic screwdriver and the pencil. 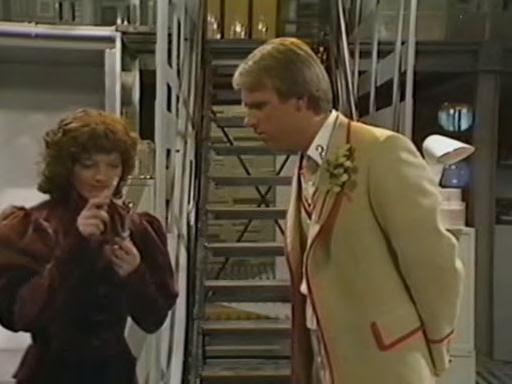 Posted by Setsuled at 5:45 PM
Email ThisBlogThis!Share to TwitterShare to FacebookShare to Pinterest