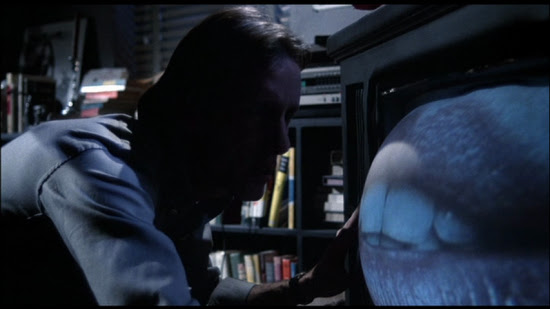 I won't be the first person to point out how prescient that statement is for our times, coming from David Cronenberg's 1983 film Videodrome. This "retina of the mind's eye" is now on our desktops and our phones and so on. It's interesting to think how this intimacy was once perceived, when it was limited to large screens in theatres, when it was invariably a communal experience. People would go to the cinema like going to church, dressing for it and looking for a transcendental experience. Now these connexions to the electric spirit world are at the fingertips of private individuals, and that world has gotten more complex and more specialised, drawn closer to individual experiences.

I've seen Videodrome more times than I can say--I first saw it at least ten years ago and have watched it many times since. One thing I don't think I appreciated as much in my earlier viewings of the film is the character arc of Max, the main character. Masha, the worldly pornography agent Max goes to learn more about Videodrome, tells him Videodrome has something Max doesn't have--"A philosophy, and that's what makes it dangerous." I usually thought of this line in terms of what it meant about Videodrome, how it appeared to be some shadowy conspiracy with goals beyond proliferating snuff films. But what the line says about Max is equally important--Max doesn't really have a philosophy. No more than most people, except he's brash and of course young. Arguing on a panel show early in the film, he talks flippantly about how the pornography he broadcasts provides people with an outlet, and goes on to draw conclusions about Nicki Brand's sexuality from the colour of her dress. One senses he says these things for shock value, but they're smart enough statements to be defensible, so that no-one can take his candy away, so to speak.

But without a bedrock of a real commitment to anything besides an instinctual need to find something more "rough" to suit his jaded palette, he easily falls prey first to Videodrome, and then to O'Blivion's counter movement, like a brainwashed soldier.

Immediately after the movie ended last night, I opened my web browser to check my e-mail. For years now, I've had my home page set to Wikipedia's random page--you can do this by going to Wikipedia's main page and copying the url for the "Random article" link in the left column without clicking on it and pasting the url in the field for homepage in the browser options. It's a fun thing to have as a homepage.

Anyway, immediately after watching Videodrome, I clicked on my web browser and saw Sonya's Wikipedia entry pop up before me. Out of over three million entries, I got that one. I know, of all the gin joints in all the towns in all the world . . . But, of course, no one walked into anywhere. Weirdly, the more I tried to tell myself that it meant nothing, the more it bothered me. I kept bouncing back and forth between feeling slightly, but genuinely, crazy, and feeling cheated by experiencing what seemed for a split second like a significant occurrence related to something I lost hope in a long time ago. Where Max's lack of a philosophy made him vulnerable, my more or less possession of a philosophy has made me miserable. Though I guess buying into magical thinking would probably lead me down a more miserable road eventually. At least I didn't get "Wild Mountain Thyme" stuck in my head again.

It made me realise I need to step up my work with my next comic. I'm starting to lose it in exactly the same way I did before I got to work on Venia's Travels. You see, my mind makes characters, it makes personalities that disagree with each other, attaches whole histories of psychological hangups and motivations. I need an outlet for it, or my brain starts feeding on people I care about who won't talk to me and starts trying to get insightful. I know this about myself, and this self knowledge is something I keep close to heart because it contradicts the people who tried to tell me I was crazy for liking Sonya without having met her in real life. Well, I think they thought I was crazy because they decided when I said I loved someone it meant I presumed some form of reciprocal connexion, when I see myself as perfectly capable of loving my perception of a person without any action or participation on their part.

Anyway. The whole world's finding it trickier to separate itself from the screen.
Posted by Setsuled at 6:16 PM
Email ThisBlogThis!Share to TwitterShare to FacebookShare to Pinterest