Lately I've been watching This Simpsons while I eat dinner. I started with the second season, as I recalled that was when the show really started to become itself. Though I haven't watched the old episodes in at least ten or fifteen years. I remember discussions about the season premiere, "Bart Gets an F", when I was in fourth grade. It was still a time when it wasn't strange that everyone had watched the same episode of the same television show. And there's actually a lot in that episode for fourth graders to relate to--told from Bart's POV, the episode contains a lot of insightful little moments, like the bit where, to prove Bart hasn't read Treasure Island for his book report, his teacher asks him to name the pirate and a list of famous pirate names runs through Bart's head until he says with conviction, "Blue Beard".

The point is to further establish Bart as a kid trying to pull a fast one on his teacher. I was struck by how different that is from the closest modern equivalent show, Family Guy. Family Guy would probably have gone to a flashback of the kid throwing the book at a giant rabbit or something. But all animated comedy is more firmly ironic now, we're more comfortable with it. There is heart in Family Guy, but it's almost by accident. I was thinking how appropriate it was that Stewie Griffin's voice is modelled after Rex Harrison in My Fair Lady because Stewie started off being supposedly villainous and gradually he simply became something like an average adult in the body of a child--much as Harrison's performance isn't particularly evocative of the character he played.

I remember, too, all the controversy surrounding whether or not The Simpsons was a positive influence, an argument that seems so incredibly quaint and obsolete now. I think now and then you hear someone complain about Glen Quagmire raping someone, while there would be a national uproar if Bart used the word "hell".

Critics argued that The Simpsons showed the terrible behaviours of Bart and Homer as acceptable, while defenders argued that the show, as satire, actually poked fun at crass American behaviour. Three episodes into season two, it seems to me the show does both. It identifies the behaviour as bad, but loves Americans anyway.

It seems strange to me now that we don't have massively popular mainstream shows digesting our collective self-image anymore. Watching the old Simpsons episodes, it strikes me that western culture is sort of drifting in a cultural chaos, or is more sharply divided into thousands of subcultures. 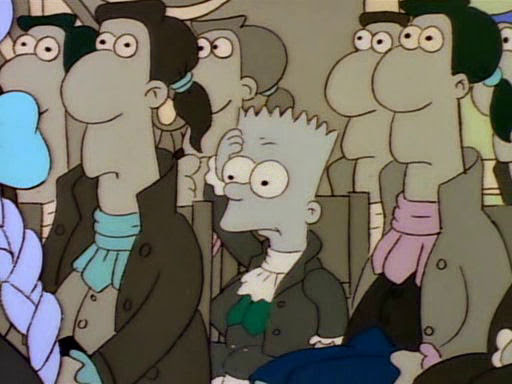