Doctor Zhivago's a movie I consider to be almost flawless. I have no complaints about the first two thirds, in fact it transports me better than any hokey rapture could just with the beauty of its imagery. I watched it in Blu-Ray last night, which was utterly breathtaking.

My problem starts when Yuri finally kisses Laura. Maybe it's because I've never been married, but I don't get adultery. Well, I don't mind open marriages, though it's not how I'd prefer to live. I can still respect the people who choose to lead their lives that way. What I can't sympathise with is making a commitment to someone and then going behind their back and betraying them. It's not that I think it's bad behaviour, though I do, but that I think it's pathetic behaviour. I respected Yuri up to that point, I liked how, from his POV, action would occasionally stop as he admired the moon or some flowers or some other bit of natural beauty. I loved how he simple heartedly agreed with the communist philosophy and was happy to share his home suddenly with dozens of strangers. All this makes the apparent ease with which he betrays the woman pregnant with his child even more ridiculous.

But, again, I do like unlikeable characters. I really liked Rod Steiger's character, who's a cynical bastard who does terrible things, but he's no simplistic villain. He calls Pasha a better man than him and he means it--he knows he's scum, and he's comfortable with it. His narcissism actually makes him helpful sometimes as it's apparently the sole reason he seeks to save Laura. That kind of moral ambiguity I can dig. But the petty adultery stuff belongs on Ricki Lake.

Doctor Zhivago has an amazing cast, particular since it has so many actors I'm familiar with from such a diverse range of movies and shows. Klaus Kinski is effortlessly effective in a minor role--I know him from Werner Herzog movies. Tom Courtenay I know from Billy Liar, Alec Guinness I know from Star Wars (did I just hear a ghostly, disappointed sigh? Must be the wind), and then there's this guy

Bernard Kay is one of my favourite recurring Doctor Who guest stars. Apparently he was playing Saladin on Doctor Who at the same time he worked on Doctor Zhivago. Now that's spanning a spectrum of Doctors.

I'm still in the desert of Colin Baker, but I hit the oasis of "The Two Doctors" a couple days ago. A genuinely fun episode that brought back the second Doctor and his companion Jamie.

There's something vaguely racist, in a Star Trek way, about the bloodthirsty race of chefs, the Androgums, and the scientific experiments to make them smarter. But I admit I laughed when the second Doctor said to the scientist in charge of the project, "I have no doubt you could augment an earwig to the point where it understood nuclear physics, but it would still be a very stupid thing to do!"

I also loved when the second Doctor is implanted with Androgum DNA and he and the chef go into Seville to ask if a restaurant served human flesh. And I loved the waiter's ingratiating reply, "No, sir, the nouvelle cuisine has not yet penetrated this establishment." 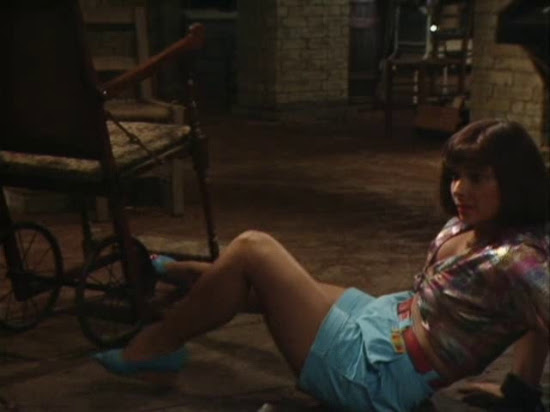 I have to admit, too, to enjoying Peri a lot. She has the perfect body. And it makes her fake American accent sexy somehow, like she's wearing a dress she hopes no-one notices is totally see-through.
Posted by Setsuled at 5:09 PM
Email ThisBlogThis!Share to TwitterShare to FacebookShare to Pinterest