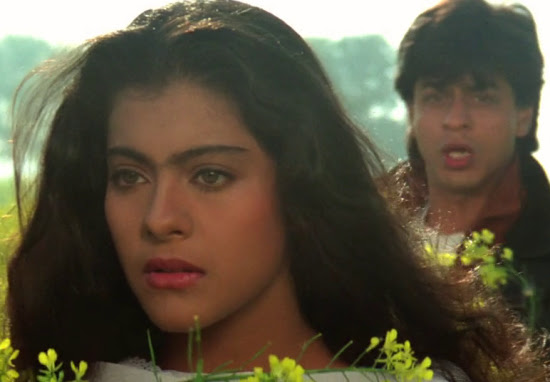 Kajol's one of the hottest chicks with a unibrow I've ever seen. Shahrukh Khan is the most annoying leading man I've seen in a movie I've liked. They are the stars of 1995's Dilwale Dulhania Le Jayenge, a nice romantic comedy musical with an unremarkable story about a pair of unlikely lovers trying to find a way around the girl's father's idea of marrying her off to the son of his friend.

It's kind of hard to explain why this movie works. For about the first hour (of its typical of Bollywood three hour running time), I didn't think it worked. Kajol is gorgeous as Simran, sings well, and the musical numbers are put together with ingenuity and feeling. But Raj, the character played by Shahrukh Khan, is simply repulsive. 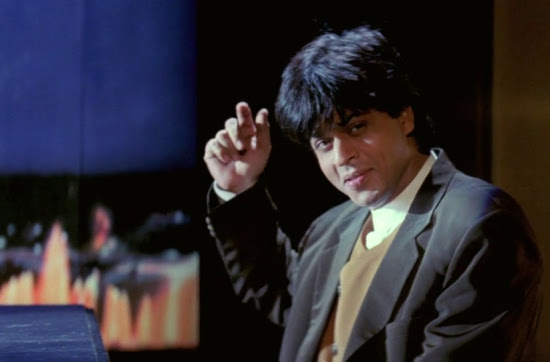 I know, to a certain extent, he's supposed to be, as he basically pulls Simran's pigtails all over Europe. He's meant to be a free spirited character that the sheltered daddy's girl had trouble admitting she likes because it means admitting to herself there's something inside her yearning for freedom. Except this guy's broad slapstick, constant lying, manipulation, and pawing her--not to mention his corny, spastic stuttering and manic scampering to rival Jar Jar Binks--would compel any woman with half a brain never to speak to him again.

And yet, Shahrukh Khan is an enormously successful Bollywood star. I thought he couldn't be anything more than maybe an Adam Sandler type, someone whose default mannerisms happen to resemble those instinctively regarded as hip by most Indian movie goers. And maybe that's part of it, but the guy's a lot bigger than Adam Sandler--according to Wikipedia, the guy's won a tonne of awards and has been in over seventy movies encompassing a variety of genres--romance, comedy, action, drama, and sports.

I guess it could be a cultural thing, like what it must be like to see Bruce Willis circa Die Hard if you're Egyptian. But I watch a lot of foreign films, and I can't remember ever being this repelled. The guy projects like crazy--in the scenes where he's supposed to be pulling the wool over people's eyes, he can't keep from mugging for the camera, using really broad sarcastic or nervous tones like a sitcom actor. The only thing I can think of is that he must have been really good in movies before this one so his fans are responding more to the familiarity of the man.

It doesn't help that he's playing a spoiled rich kid. He comes with baggage of entitlement and smugness that one rather sympathises with Simran for having to deal with, even though she mysteriously starts falling for the goofball.

But, anyway, the last couple hours of the film are good. Raj's broader antics are put in the background a bit as he becomes more of a straightforward hero. He's a good singer and the duets between them are sweet. I particularly liked when they part after the trip in Europe and both are haunted by dream versions of the other singing to them.

The plenty of location shots aren't particularly well done, but the locations are so beautiful they kind of can't fail. In the latter half of the film, in India, familiar colourful Bollywood costumes take over and the comedy of misunderstanding and subterfuge is fuelled by a genuine desire to see these two kids end up together, creating real tension and motivation for the songs, reminiscent of Fred Astaire and Ginger Rogers movies of the 1930s with similar screwball frameworks.

This is the best bit from the first part of the movie;

Hardcore Donald Duck fans like me will spot three Donalds in her bedroom. That alone makes me like her. Then she also has great legs and fantastic breasts and doesn't seem to wear a bra much in the movie, most appreciably in two scenes where she's running to catch a train.