Though You Never Do Get to See the Box 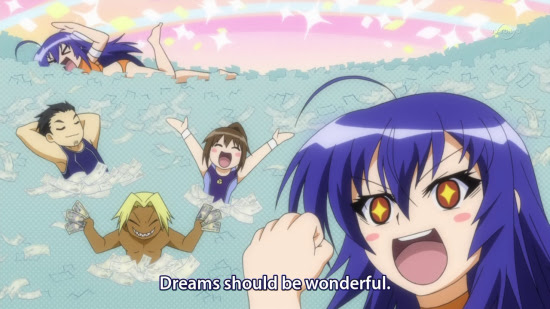 Yeah. Well, as dreams go, Medaka Box (めだかボックス) isn't bad. I watched the final episode of this, the newest GAINAX series, with breakfast to-day. It might be best described as rigorously not bad. It's certainly not the delightfully unrestrained Panty and Stocking with Garter Belt, it's closer to Dantalian no Shoka, as I said when I started watching, as it seems like an attempt by GAINAX to dip its toe into the trends of modern anime. Nevertheless, it has plenty of good, familiar GAINAX qualities, in terms of violence, fan service, and intellect.

It's not the free form psychological exercise Evangelion is famous for, but Medaka Box is the most straight forward contemplative anime GAINAX has done since Top o Nerae 2, its fodder being philosophies of public service. The climax of the series sees the busty Student Council president, Medaka, facing off against an evil looking Unzen, a ten year old prodigy who advanced to high school early for his incredible abilities. Not that you see any of the teachers or school administrators who make these decisions--I think we only see one adult in the entire series. The cops don't even show up when the battle between the two characters destroys half a building. 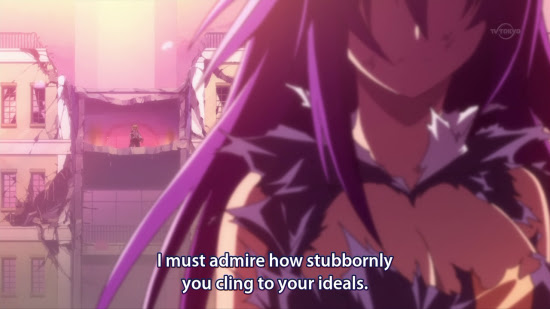 Unlike Top o Nerae or even FLCL, Medaka Box doesn't take place in a world that takes itself seriously, even though it takes its subject extremely seriously. We're just supposed to accept that Unzen slaughtering all the kids in the music club falls under his jurisdiction as part of the school's "Enforcer Squad". It's his cynical belief in harsh justice without any particular love for humans that creates the ultimate rebuttal for Medaka's philosophy of unconditional love for humanity presented throughout the series in the form of a number of goofy vignettes. 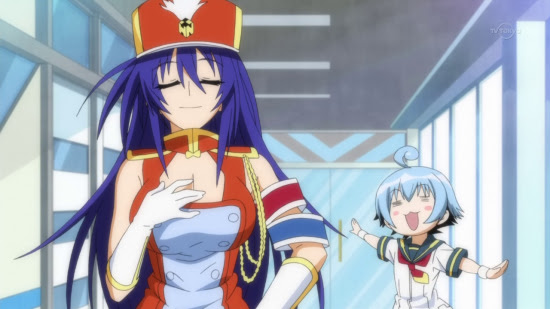 The difference between the two of them, Medaka tells Unzen, is that she accepts that she does not have the answers and does all she can to minimise harm.

It's nice a show presents this kind of food for thought, and I certainly love the supremacy of compassion and cooperation embodied by Medaka's character--which is not, as I might have feared, hypocritically brought across by her brute force on the show. Though I'm not sure I feel the philosophical material quite mixes naturally with the story and characters. There's a lot of that notorious aspect of anime normally absent from GAINAX series--the scenes of the super powerful characters engaging in endless dialogue instead of jumping into the massive beat-downs they keep promising.

In terms of less directly given thematic content, I wondered if the makers of the series intended it to be some kind of commentary on motherhood. There's something about a caretaker girl with oversized breasts in a position of authority fighting a ten year old boy rebelling against her philosophy that resonates in a way I'm not entirely sure it was meant to. 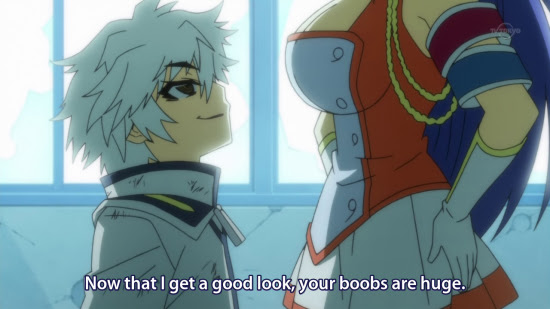 But the characters are in themselves lovable and the GAINAX animation style is definitely present and recognisable. A fair GAINAX series is still ten times better than most everything else out there. 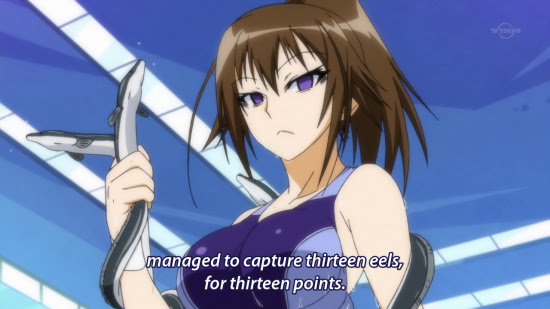 Posted by Setsuled at 7:19 PM
Email ThisBlogThis!Share to TwitterShare to FacebookShare to Pinterest