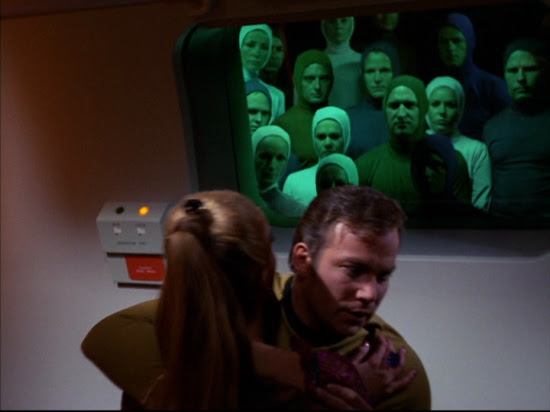 My more than ten year old memories of "The Mark of Gideon" seemed to be a bit better than the episode of Star Trek I watched last night. All I remembered was the setup of Kirk running through the empty Enterprise corridors, finding a girl similarly alone and frightened, something about overpopulation, and the creepy shots of the crowds outside windows and the faces watching Kirk and the girl. 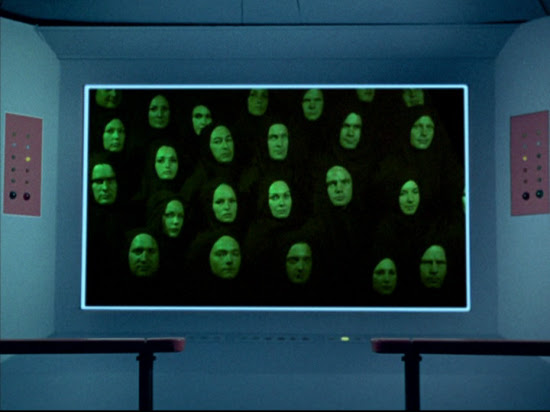 The episode is a bit of a mess, a plot so full of holes it obliterates any interesting rumination on the problems of overpopulation. The isolationist people of the planet Gideon are apparently basically immortal, overpopulation is such a problem for them that there is no space on the planet where one isn't surrounded by other people. But for some reason they have room to make a replica of the Enterprise for Kirk to wander around alone in. Why do they trap Kirk so? To get a blood sample in order to get traces of a disease Kirk had so they can use it to infect the population and lower life spans.

So, yeah. I guess maybe government councils attempting to solve population problems can allow complicated voyeuristic fetishes to influence their plans. Kirk asks them delicately about contraception at which point we get a scene that tries to present a confusing anti-contraception philosophy while accommodating 60s censors who didn't want Trekkies to be told how babies were made. Meanwhile, no-one brings up the idea of off world colonisation. 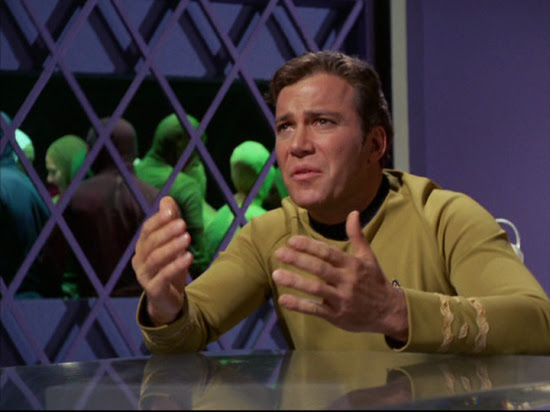 What a way to get a blood sample. There's just no other way. Need to catch a cold? You gotta make The Truman Show.

This episode's from near the end of the third season, when producers and writers were starting to jump ship in response to a drastically diminished budget. Practically every episode seems to take place on the Enterprise now, or places with redressed Enterprise sets. But I will reach the end. I am a completist.

Posted by Setsuled at 4:53 PM
Email ThisBlogThis!Share to TwitterShare to FacebookShare to Pinterest