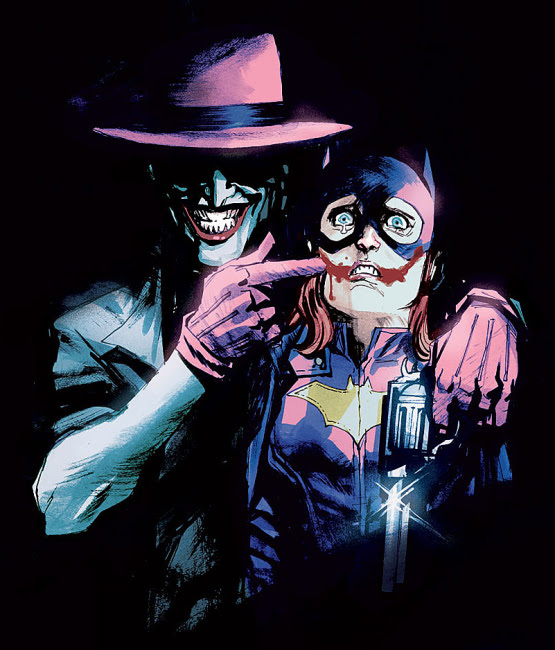 I guess by now you've seen this controversial Batgirl variant cover. Well, maybe I shouldn't assume because I just came from a comic book shop where I had a long talk with the young woman behind the counter who'd yet to see the cover. This in spite of the fact that she was unmistakably a hardcore comics reader--when I told her most of my exposure to mainstream comics was through high profile collections of Alan Moore and Frank Miller as well as reprints of early Marvel runs (mostly Spider-Man), she eagerly launched into a detailed oration on the current DC chronology and how it fits in older plots--like how a new Batgirl story in a rebooted chronology can still reference events in The Killing Joke, a comic written in the 80s, etc.

She told me she'd had the controversial cover described to her and didn't understand what the fuss was about. Of course the Joker was evil and he did shoot Barbara Gordon (Batgirl) in The Killing Joke, paralysing her from the waist down. She didn't mention that the Joker stripped Barbara naked, took pictures of her, and possibly raped her. Perhaps the young woman I was speaking to considered it irrelevant. Her main complaint with the current Batgirl run is that Barbara Gordon was more interesting as Oracle, the identity she assumed when bound to a wheelchair when her primary means of fighting crime was through software engineering and hacking.

Of course, much of the controversy over the cover variant stems from perceived differences between male and female readers as superhero comics in the west are currently enjoying a growing female readership. One side of the argument is made up of people who claim the female readership would largely be too disturbed by the image while others argue that the trauma is an integral part of Batgirl's character and that the Joker ought to be as frightening as he is depicted in the image. In the latter camp is the author of this blog entry which I saw linked to by Caitlin Kiernan on Facebook this morning. Written by a woman named Dangrrr Doll, the blog entry discusses a personal history in a relationship with a sociopath man and advocates fiction that discusses the issue, crucially arguing for the importance of portraying fear in Batgirl's face as a sign of the humanity repressed in the psyche of Harley-Quinn.

An example of the other side of the argument can be found here in an article by Rob Bricken for io9. Among other things, Bricken says the variant cover is "incredibly sexist — I would hope even the most bitter of woman-hating male comic fans surely have to agree that a male superhero, unless he was a child, would never be drawn crying while held hostage by a supervillain."

Doing a Google image search for "Superman tied up" I came across this: 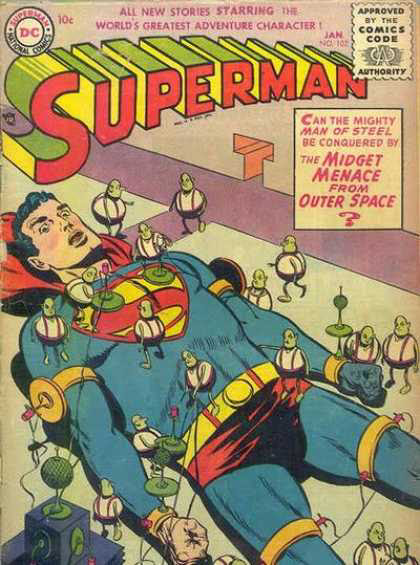 I guess he's not crying but he certainly looks distressed. Maybe a more appropriate analogy would be Robin who has been depicted gruesomely beaten, in extreme distress, and held captive numerous times on both covers and interiors. And I think it's important to note that there's more that separates Batman and Batgirl than sex, which is the flaw in the reasoning that what's good for the goose superhero is good for the gander superhero. Even Batman and Batwoman are pretty dissimilar in a lot of ways, as I was told at length after I asked the woman behind the counter to-day.

As it happens, I was at another comic book shop yesterday where I talked to another female comic book fan--and mind you, I consider it pretty unscientific to take even two samples and hold them as signifying the whole. Which I might not even need to say since I don't know exactly how the woman yesterday felt about the cover. She'd seen the cover and was aware of the issue but seemed as though she were waiting to hear my opinion before expressing one of her own. Since I didn't express mine--as I was interested in hearing hers with as little tailoring as possible--she passively expressed both opinions, saying, "It's a homage to The Killing Joke and people are saying, 'Why bring that up now?'" and also, smiling and shrugging vaguely, "People get angry." Maybe she feared I would launch into a tirade on how wrong she was for feeling whichever way she actually felt.

So how do I feel? Well, the reason I was at comic books shops yesterday and to-day was to pick up issues of this Batgirl run, wanting to get the issue that was to have had the now retracted variant cover, not realising the issue in question, #41, won't be released for a while. I did pick up #40 and if the Joker cover had been for #40 it would have been more than appropriate--meaning, it would have elevated the content of the issue.

The story in #40 deals with a villainous computer programme, a haywire version of one created by Barbara Gordon when she was still Oracle. The programme is like a repository of all the anger and desire to take violent revenge on the criminal world that manifested in Barbara after she was assaulted by the Joker in The Killing Joke. The programme wants to cross all the hot button Batman lines--she wants mass surveillance of Gotham's citizens and wants to exterminate everyone who might become a criminal. I use the word "exterminate" for a reason--the solution to the problem ends up being the same one the Doctor uses on the Daleks in the 2003 audio play Jubilee which I intend to talk about on Saturday. Anyway, I won't spoil either one for you. But I wonder if this was a coincidence.

The thing is, in the comic itself you only get Barbara's fury, the desire to eradicate any possibility of what happened to her happening again to anyone. It's only the variant cover that touches back on the feelings that brought Barbara to that point. Without that cover, the programme version is little more than another psychopath villain. With the cover, it becomes part of a very Batman-ish arc.

I reread The Killing Joke a few weeks ago. It's a very influential comic in all incarnations of Batman and the Joker now and with good reason. It taps into the fundamental dichotomy between Batman and the Joker that's so interesting--Batman, who wants there to be rules and who wants people to be afraid, the Joker, who wants to show that rules are lies and feelings are meaningless in this world. I think that's crucial--what the Joker did to Barbara wasn't to make her afraid, it was part of a larger plot to demonstrate to Batman and Barbara's father that the universe is fundamentally meaningless. Batgirl's story allows us to see this dichotomy from another angle where the Joker's treatment of her as something meaningless is rebuked by Barbara's assertion of an identity. Batgirl #40 is a nice discussion on the difference between her identity being based entirely on the wrong done to her and her identity being based on a broader, more creative idea of wanting to help other people.

Posted by Setsuled at 6:39 PM
Email ThisBlogThis!Share to TwitterShare to FacebookShare to Pinterest