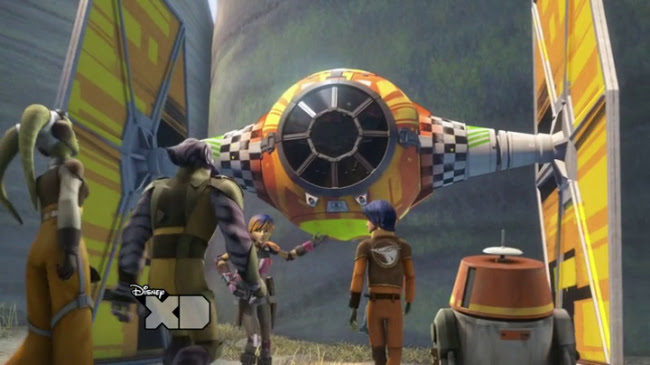 So no-one noticed Sabine sneaking away for days at a time to paint a TIE Fighter to look like Colin Baker threw up on it. That's a nitpick, I know, and this moment was thankfully overshadowed by just about everything else in last night's Star Wars Rebels season finale but I'm focusing on it because I think it's emblematic of fundamental problems with the series and maybe Disney itself. It's the first moment where Sabine's personality has any real impact on the events of the show, the first time her concept as misfit artist kid comes into play. Can there be anyone worse than Disney to handle a misfit artist character? It's like getting folk art from Target. It reveals more about the cumulative hazy brain perspective of the corporation than it does about the character--they see individually motivated art as ugly because it doesn't conform but have been drilled into respecting the individual as a point of mysterious morality. 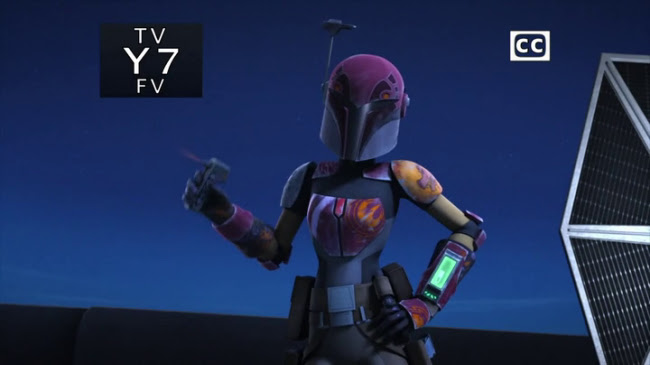 Do they find it worrying that "Let It Go", a song originally intended for a villain in Frozen, is about throwing off the yoke of respectable behaviour in society? Elsa in Frozen was an accident, an anomaly born of Disney's shadow coming to life. Sabine is Disney trying to do it on purpose and we see how poorly the conscious mind of Disney understands this kind of character. Sabine is a hideous parody of the sort of people Disney would never dream of hiring or, if they did, it would be to force them into the machine that could tap what little of the creative force could be conditioned to serve the collective. 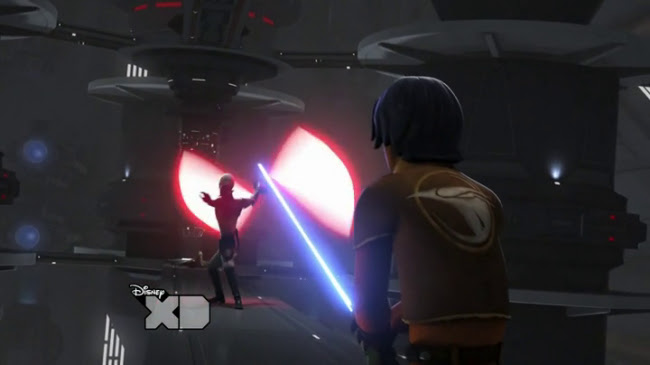 This is how we get Kanan and Ezra, whose very effective sabre battle with the Inquisitor, directed by Dave Filoni, I enjoyed even though it was unmistakably a version of the sabre battle in the climax of The Phantom Menace. Only safer. There was a moment where it looked like a character died and I thought, "Okay, if he didn't actually die, this whole scene is going to be completely insubstantial." And indeed, that's how it played out, without substance.

The outline of the episode was good. The main cast going to rescue one of their number in a Star Destroyer and a sabre battle. They obviously raised the cgi rendering budget for the episode. I liked that they wanted to give it a feeling of scope but it still feels so much less organic than Clone Wars. They tried to give it scope by following a sewing pattern of scope while Clone Wars always felt like things were propelled by real ideals and real interest in taking the characters to certain places.

Okay, I'm going to go into spoilers now after the next screenshot, albeit spoilers everyone on the internet seemed to know about halfway through the season. 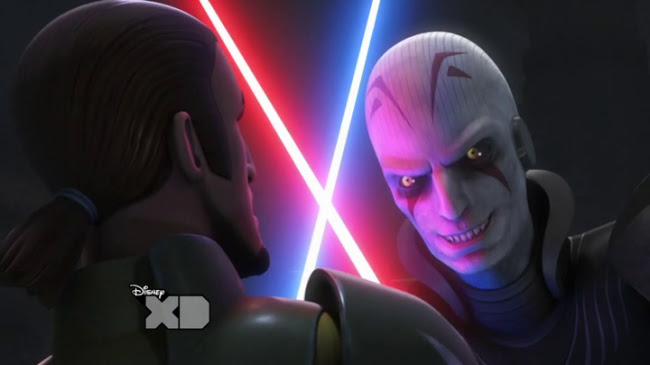 I really was happy to see Ahsoka again. But when she immediately started talking about Ezra my spirits dampened quite a bit. Showrunner Dave Filoni has said now that Ahsoka will basically have the Obi-Wan role which sounds to me like she's going to die pretty soon. Probably in a confrontation with Vader. Which could be great. If the show were willing to focus on Ahsoka for a while instead of relentlessly pushing their generic brand version of Luke Skywalker.

False light sabres cut not a stale cracker.
The painted bulb effects no sundering.
Gold leaf uselessly gilded the tracker.
Lo the apple explodes past numbering.
Multitasked belief grafted Christ to imps.
Puzzles fell on Susan Alexander.
Cardboard rain has revealed the eyelid limps.
Monochrome stencilled the oleander.
Reworked wallaby bypasses are cold.
Nothing removes a mauve made man like red.
Behind the hind are deer of legends old.
The crops cooperate when weirdly wed.
Returned Togruta get a shorter stack.
The stars of God will burn pancakes to black.

Posted by Setsuled at 1:54 PM
Email ThisBlogThis!Share to TwitterShare to FacebookShare to Pinterest