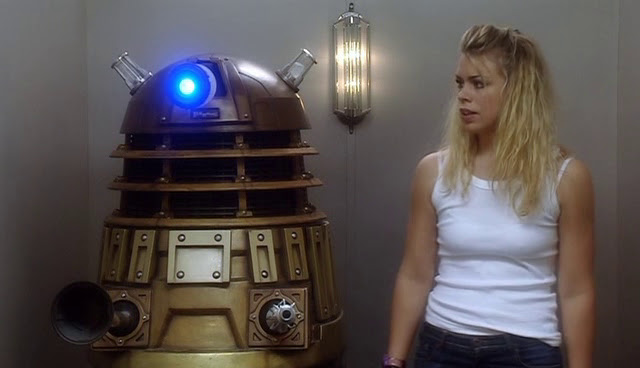 It seems the New Year's resolution for Big Finish Doctor Who audio plays in 2003 was, "Include more gruesome violence." The first two audio plays of 2003, Jubilee and Nekromanteia, see the Doctor physically mutilated, even beheaded in one case. The third of the three I listened to this past week, The Dark Flame, was also, as the title implies, pretty dark. All three were good but Jubilee was by far the stand out.

Written by Robert Shearman, the story so impressed Russell T. Davies he had Shearman rewrite it for a Ninth Doctor television episode which came to be "Dalek", the episode that marked the first appearance of a Dalek in the revived series. Certainly I prefer the Ninth Doctor over the Sixth Doctor, who starred in Jubilee, but nonetheless I found Jubilee to be a much superior work. There are just too many ways in which the greater length--over twice as long--of the audio play allows the story to breathe much better than the television episode.

The best scene in "Dalek" is the one where the Doctor sees the chained Dalek for the first time and Eccleston channels the Doctor's layers of issues with his old enemy. There's nothing like this in Jubilee though his companion, Evelyn, is shocked by how happy the Doctor is to see the captive Dalek tortured and killed, despite the fact that Evelyn had encountered Daleks previously, unlike Rose. In fact, Evelyn had encountered Daleks in The Apocalypse Element, a story about a Dalek attempt at destroying Gallifrey, which Russell T. Davies has said was a part of the Time War. So Evelyn has almost as much reason to hate the Daleks as the Doctor which makes her more gradually developed relationship with the Dalek more interesting than Rose's immediate naivete.

As good as Eccleston is in the episode and the scene where he first confronts the Dalek, he also explicitly barks things at the captive that are developed more organically and impressively in the audio play, about how the Dalek is alone as the last survivor and the difficulty the hardwired soldier has in doing anything without orders--an issue which, come to think of it, was part of the blueprint of the Twelfth Doctor's first season.

Both stories also feature the Doctor being tortured but what happens in Jubilee is much more involved, becoming one of the ways in which parallels are drawn between the Doctor and the Daleks as we're first led to believe Davros, creator of the Daleks, is being held in the Tower of London. Instead, it becomes a pretty horrifying contemplation of an alternate reality where the Doctor's luck runs out in an ominously simple way.

Jubilee also features a distorted time plot, beginning with the Doctor and Evelyn seemingly arriving in both 1903 and 2003 simultaneously before settling in 2003 where they encounter a history of a war between humans and Daleks that's become almost a legend. We hear an over the top action film with a handsome, gun toting Doctor and a bombshell Evelyn foiling Daleks who amusingly yell, "Scarper!" at the sight of them. No-one suspects a living Dalek is being held by the English Empire and the Doctor has a rather nice speech at one point about the trivialising of evil, how the costumed Daleks he encounters singing songs are a reflection of the human arrogance that is making humans more like Daleks.

Jubilee would be just about perfect if only someone other than Colin Baker were playing the Doctor.

The subsequent two audio plays, Nekromanteia and The Dark Flame, a Fifth Doctor story and a Seventh Doctor story, respectively, were both fine. Nekromanteia has a particularly grim feel, featuring a group of cannibalistic, space faring witches who reminded me of the Reavers from Firefly. Erimem, the Egyptian princess companion, continues to be interesting when she asserts her personality as reflecting her history. She's much quicker to accept ritual sacrifice than the Doctor and Peri.

Aside from a scene where Peri is stripped naked by the witches as they attempt to induct her into their coven, I'm finding the experience of the audio plays often times more enjoyable than the television series for allowing so much to be created in the mind. It's more atmospheric and obviously the special effects are much better.