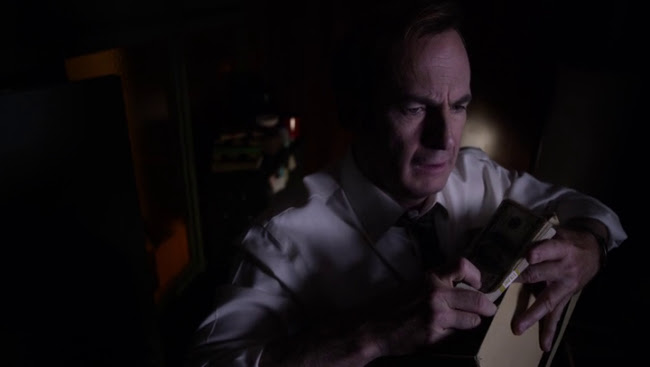 Happy Saint Patrick's Day folks, I guess it would be appropriate to talk about James McGill, a.k.a. Saul Goodman, since there was a new episode of Better Call Saul last night and Saul claims on Breaking Bad to be Irish. He took the name "Saul Goodman" for the appropriately slimy reason to sound Jewish to people who assume Jews are genetically disposed to make better lawyers. A couple episodes back on Better Call Saul we saw him use the pseudonym for the first time in a flashback to where he was a much younger man, apparently before law school, where he ran a mugging scam. He told his victim that his name was like, "S'all good, man," which makes me worry they're trying to retcon the motives behind the name change to make the character seem less willing to make a cheap appeal to bigotry.

It's kind of funny the one and only thing it says in the Personal Life section of the Wikipedia entry of Bob Odenkirk, the actor who plays Saul, is "Odenkirk has stated that his wife and children are Jewish, but he is not." Calm down, folks, he plays a character who pretends to be Jewish, no rational person thinks he's Mel Gibson.

I remember first seeing Odenkirk on The Ben Stiller Show, a sketch comedy series from the early nineties which had just four stars--Stiller, Andy Dick, Janeane Garofalo, and Bob Odenkirk. I used to think it was kind of interesting that Odenkirk was the only one who didn't go on to be very well known but I guess that's no longer the case. Comedic actors, particular those known for sketch comedy, generally seem better at doing a sort of perfect mimicry of emotion than they are at conveying it like conventional actors. Some can make the transition--like Bill Murray, Steve Martin, Jim Carrey, or John Candy. More often than not, an actor simply doesn't have both muscles--like Dan Ackroyd, Martin Short, Chevy Chase, Mike Myers, Ben Stiller (and yes I have seen Permanent Midnight), and Adam Sandler. Well, Adam Sandler isn't really good at sketch comedy, either. Anyway, I would have thought Odenkirk was someone who belonged to the latter group rather than the former. Last night's episode wasn't the first time I realised he could do straight drama after all but it may have been the one that really cemented it for me. 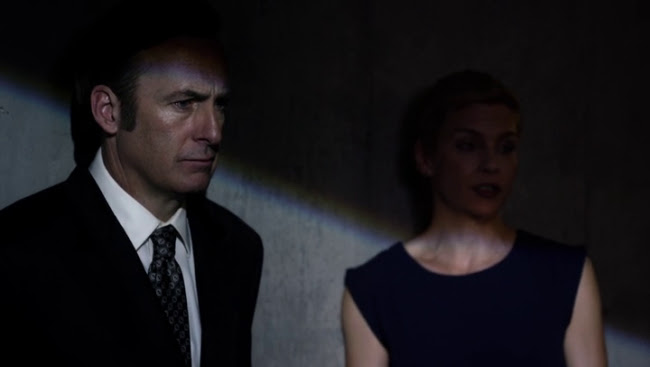 I saw one critic remark that the show is shaping up to be about finding identity. Last week's episode, which almost entirely focused on Mike (Jonathan Banks), had one appearance by Jimmy/Saul which seemed to confirm this. Mike asks him to spill coffee on a cop in an interrogation room so Mike can lift the guy's notepad. Jimmy refuses but then does it anyway, later asking Mike how he knew he'd steal the pad. Mike just smirks wearily like someone who's so used to seeing through people he doesn't even question himself anymore.

About that episode--it was good, a nice ode to the dirty cop film noir which wouldn't be particularly remarkable as a stand alone movie but somehow is great sitting unexpectedly in the middle of Better Call Saul.

For the most part, I'm enjoying Better Call Saul quite a bit, I'm finding its quality actually more consistent than Breaking Bad. Last night's episode sees the culmination of a plot thread where Jimmy goes to great lengths to do the right thing. This is where a more conventional story might end--it is very satisfying watching Mike and Jimmy carry out their plan and delivering the high profile criminal couple, the Kettlemans, to Kim (Rhea Sheehorn), a woman Jimmy's in love with who works at a rival firm. What makes Better Call Saul interesting in a way that very much echoes Breaking Bad is the scene where Odenkirk conveys just how much doing the right thing actually satisfies Jimmy.