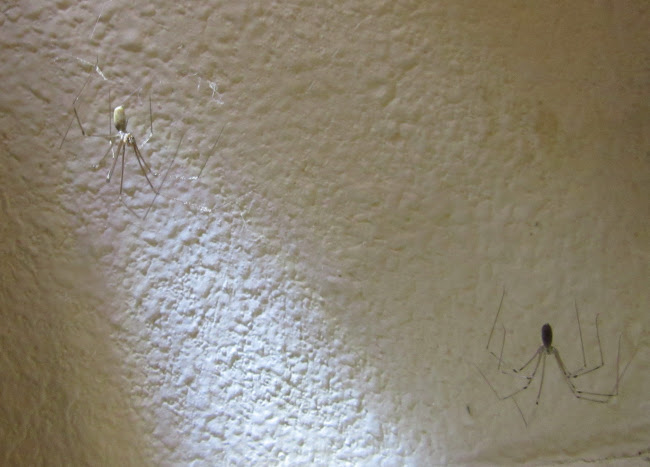 Here's the double daddy long leg fantasy going on in the corner of my apartment to-day. 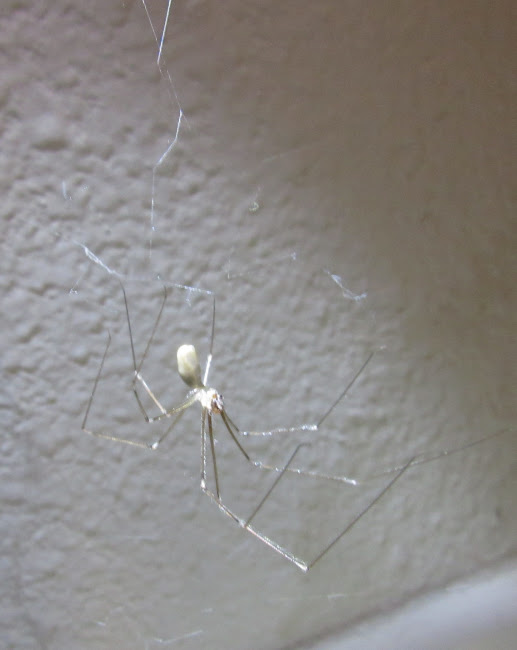 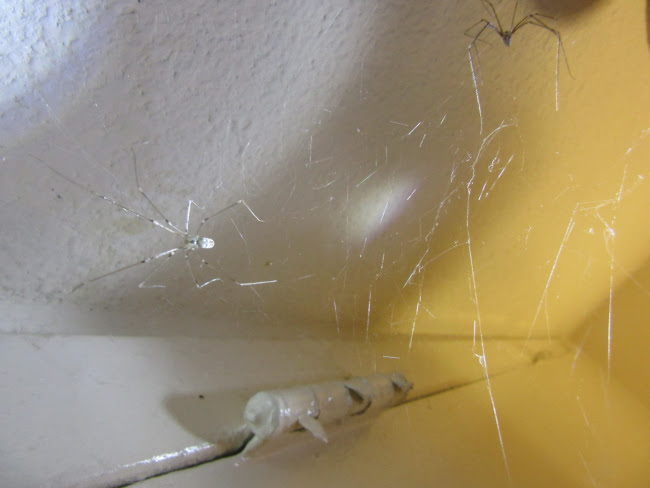 I listened to two Doctor Who audio plays this past week, from the last two months of 2002, both good--a Fifth Doctor story called The Church and the Crown and a Seventh Doctor story called Bang-Bang-a-Boom!. I liked The Church and the Crown a bit better, the second one I've heard now with the Egyptian princess companion Erimem who here easily inserts herself into the court of seventeenth century France. It's pretty funny, she sounds like an ideal agent for the Doctor until she starts wanting to execute people.

Most of the story is an ode to The Three Musketeers and Davison gets some fun Errol Flynn-ish dialogue and a bit of sword play like I would have liked to have seen more of in his television run. Certainly a sword fight in audio form lacks a key ingredient but Davison manages to bring to it the right kind of charm to paint a picture. The story also features Peri, who I guess is bound to appear in all of the ones that feature Erimem to keep with the television show continuity unless she leaves temporarily the way Tegan did. In this story, the Queen of France is revealed to be identical to Peri, allowing Nicola Bryant to use her native English accent for once and she proves to be a slightly better actress with it.

Bang-Bang-a-Boom! is another parody story from the same pair of writers who wrote The One Doctor, Gareth Roberts and Clayton Hickman, which I enjoyed in spite of myself, in spite of not looking for parodies in these monthly releases and in spite of the fact I hate all of Gareth Roberts' teleplays for the Tenth, Eleventh, and Twelfth Doctors. Maybe he's just not suited to drama because Bang-Bang-a-Boom!, set on station "Dark Space Eight" is not only a nice parody of Doctor Who but also a parody of 90s Star Trek and Eurovision. I liked how Sylvester McCoy plays the Doctor in this one more like he did in his first season--slightly more manic and silly and the writers give him the mixed up proverbs I loved so much from Time and the Rani. "Softly, softly catches the worm, eh, Mel?" "Unlike you, Mel, I won't spill my beans until I know how many of them make five."

There's a Dr. Harcourt who constantly hits on the Doctor who's somehow a perfect parody of 90s Star Trek. I loved the mention of an anomaly that made everyone on the station make out with each other until someone figured out a solution that needed to be piped through the air conditioning.