I'm very sorry to see Terry Pratchett has died to-day although, aside from Good Omens, his collaboration with Neil Gaiman, I've only read one of his books (Hogfather) and have listened to one audio play based on another of his books (Night Watch). But from my minimal exposure to his vast output--forty-one novels in his Discworld series alone--I appreciated his fine sense of satire improbably combined with a sincere attention to character. You cared about the people in these ridiculous worlds. I can't believe he's died at only sixty-six.

I've been meaning to read more of his books for a long time, but there will always be at least a thousand books I ought to have read. I forgot to mention last week I finished reading the King James Bible, which is probably fitting to discuss to-day since religion seems to have been a frequent target of Pratchett's parodies.

The New Testament feels a bit less pragmatic then the Old Testament, which seemed more about "What does God want?" The New Testament deliberately tries to soften some of the more hardline stuff in the Old Testament, particularly in Paul's epistles where he smooths over--I suspect it would be heresy to say "contradicts"--Old Testament instructions about circumcision and generally not tolerating non-believers. Jesus especially seems much more focused on how to be a good person rather than on how to be God's person, but in the end, New Testament seems like another way of making people feel really guilty, a much subtler way. Instead of telling people they're being tortured and killed because they stupidly failed to follow God's very specific instructions, Jesus lets people kill him for no justifiable reason, showing instead of telling just how horrible people are, and hoping it'll be memorable because he's Christ.

The more credit you give yourself for humility, the more credit you exclusively give yourself. That's how we get Puritans. Attempting to manipulate fundamental human greed into being humble is always going to end weird. It's kind of funny after Paul spends so much time trying to get people to get along we get Revelation and all that wonderfully grotesque description of what's going to happen to unbelievers. And people unlucky enough to be related to Jezebel:

18 And unto the angel of the church in Thyatira write; These things saith the Son of God, who hath his eyes like unto a flame of fire, and his feet are like fine brass;

19 I know thy works, and charity, and service, and faith, and thy patience, and thy works; and the last to be more than the first.

20 Notwithstanding I have a few things against thee, because thou sufferest that woman Jezebel, which calleth herself a prophetess, to teach and to seduce my servants to commit fornication, and to eat things sacrificed unto idols.

21 And I gave her space to repent of her fornication; and she repented not.

22 Behold, I will cast her into a bed, and them that commit adultery with her into great tribulation, except they repent of their deeds.

23 And I will kill her children with death; and all the churches shall know that I am he which searcheth the reins and hearts: and I will give unto every one of you according to your works.

24 But unto you I say, and unto the rest in Thyatira, as many as have not this doctrine, and which have not known the depths of Satan, as they speak; I will put upon you none other burden.

As a reflection of paranoid cruelty in the human mind, the bible is a great work. Even the most peaceful and wise bits work to enhance the terror of it all. If it were all just angels with multiple heads and mass murders of children, it wouldn't be as effectively harsh. Every now and then, the abuser needs to ease up, make the victim come out of foetal position, to get in a really good kick.

But Setsuled, you may ask, what kind of sweets have you been eating? I'm glad you asked--I picked these frozen cakes up on a whim from the Japanese market a few days ago: 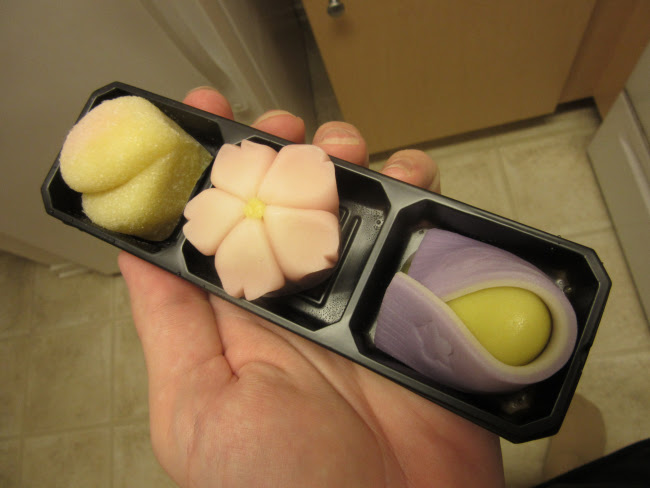