It seems like I've been reading a lot more than I've been watching movies, what with trying to get through the bible so quickly. I'm almost done, I'm partway through Corinthians. It's so funny listening to Paul go on and on about circumcision and how, hey, uncircumcised people aren't so bad. Abraham had foreskin until God told him to cut it off, after all, don't you think Abraham was a good guy before that? Then I read in Wikipedia it was Paul trying to ease tension among Jews and Christians in Rome. It's ironic reading someone in the bible getting exasperated with religious hard-liners. I feel like he wants to say, everyone stop obsessing with your dicks, already. Well, God started it.

This morning I also read the new Sirenia Digest where Caitlin R. Kiernan goes back to an alphabet writing prompt, coming up with very short vignettes for each letter of the alphabet, in this case an "Aubergine Alphabet". The new Digest contains A through M and they're all really nice pieces, filled with sinister dream logic. I particularly like "I is for Ichthyophobia" despite the absence of nipples and "K is for Keyhole" which reminded me of an exchange between James Woods and Deborah Harry recounted by David Cronenberg in the Criterion Videodrome commentary: WOODS (on the big vagina like prosthetic on his stomach): I've ceased to be an actor and have become the bearer of the slit. HARRY: Now you know what it's like. 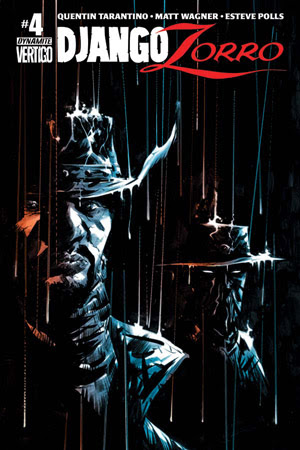 Yesterday I read the newly released volume four of Django/Zorro. Which wasn't bad but it feels like the series has kind of stalled since volume 2. Volume 2 had that really impressive introduction to the Duke of Arizona and his cut-throat, long term scheme. Django and Zorro actually aren't all that interesting by comparison and the series has spent two issues now just introducing the two heroes to the Duke's world. There's a nice scene of Zorro appearing on horseback to give encouraging words to the slaves but mostly so far it's felt like Django has been Dr. Watson to Don Diego's Sherlock Holmes--Django's been the point of view character while Don Diego schmoozes with the swells. I want more Tarantino-esque dialogue, something that lifts everything out of plot autopilot. Esteve Polls' art hasn't been as good since issue 2, either, I feel like his enthusiasm is waning.