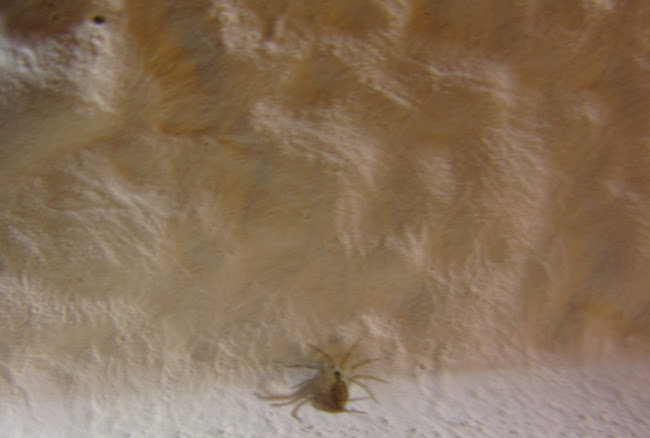 Here's a very tiny spider from my wall last night. With my finger for scale: 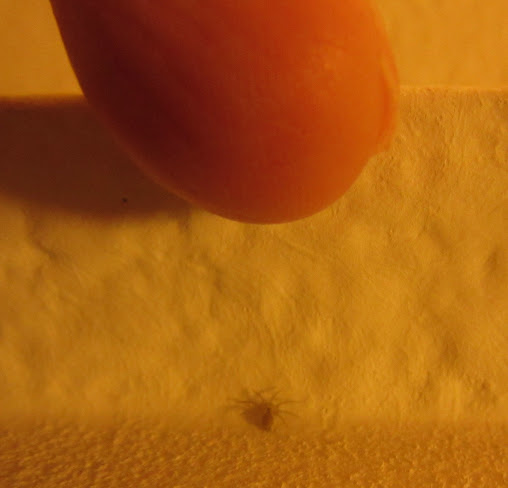 I also had some pictures of a headless snake on my camera which I saw on the grounds of the Mormon church across the street from school yesterday but I don't have the heart to post pictures of the poor guy. It looked a lot like a rattlesnake except it didn't have a rattle. Now I see more rattlesnakes are being born without rattles possibly due to the fact that a detected snake is more likely to become a killed snake. Natural selection at work, maybe the people at the Mormon church killed the snake with no rattle out of protest.

The expert quoted in that article is Steve Reaves, not Steve Reeves, a.k.a. Hercules.

I see autocorrect prefers Reeves. Well, a reeve was an occupation in the Middle Ages, a reave is just, well, nothing. You can try to run away from your past, Reaves, but autocorrect will never believe you.

I think I got four hours sleep last night due to some plumbers that were scheduled to be here at any time between 8am and 5pm. I got up at 7am, they got here at 11am, which is when I normally wake up. Oh, well. But I suspect I ought to switch to a more classically diurnal schedule since it's going to be kind of hard to sleep in here when it's over a hundred Fahrenheit outside. So I figured I'd take the hard landing and watched a movie last night. Which I'll talk about on a day when I'm not sleep walking. Now I think I'd like to stumble around outside and glare at things in confusion like a thawed caveman.

Posted by Setsuled at 3:43 PM
Email ThisBlogThis!Share to TwitterShare to FacebookShare to Pinterest