From the Forest an Electronic Voice Beckons 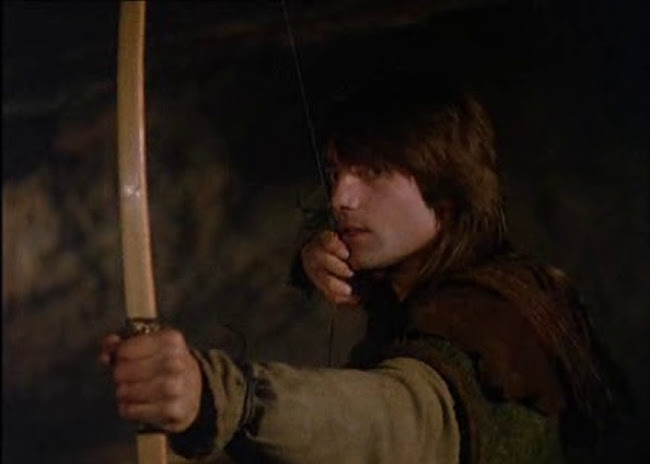 I've loved Robin Hood since I was a kid, I can't believe it's taken me this long to see 1984's Robin of Sherwood, a BBC series I watched the first episode of a few days ago at the recommendation of my friend, Ada. On the strength of one episode, I like it a lot so far. It's serious 80s, first of all--all that high contrast colour, black shading and light blooms. 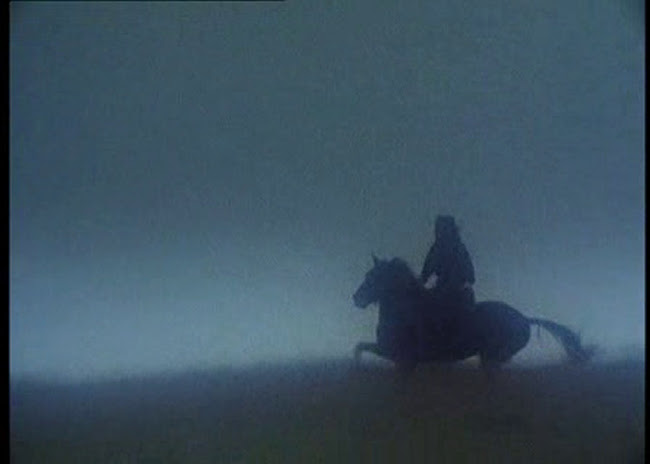 There are nods to the Errol Flynn Robin Hood--it starts with Gisburne (Robert Addie, Mordred from John Boorman's Excalibur) confronting Robin (Michael Praed) and Much (Peter Llewellyn Williams) about poaching a deer. Like in the Flynn film, Robin takes the rap for Much and carries the deer over his shoulders. 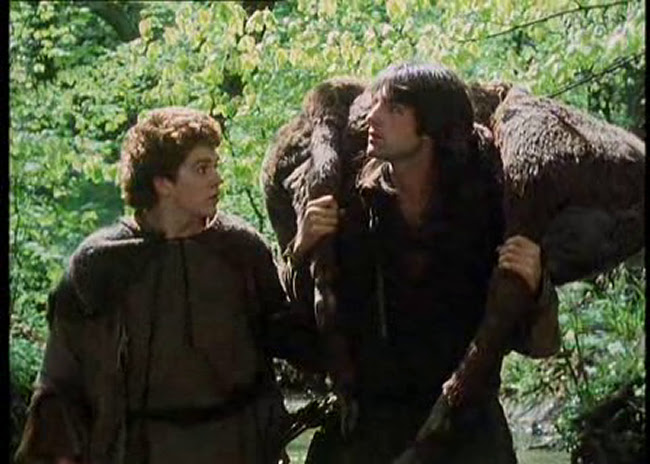 I wasn't a bit put off by the fact that Praed looks like the lead singer from Journey.

He's a lot less cocksure than Flynn and fades a little bit behind everything else in the story, but there's a lovely mellow melancholy about everything that makes a low key Robin appropriate. The soundtrack by Clannad is deliciously synthesised and dreamy over gorgeous English forest shot with low exposure. Good gods, that's something it definitely has over the Flynn movie, which was shot in southern California. Forests in southern California look different from forests in England, to put it mildly. 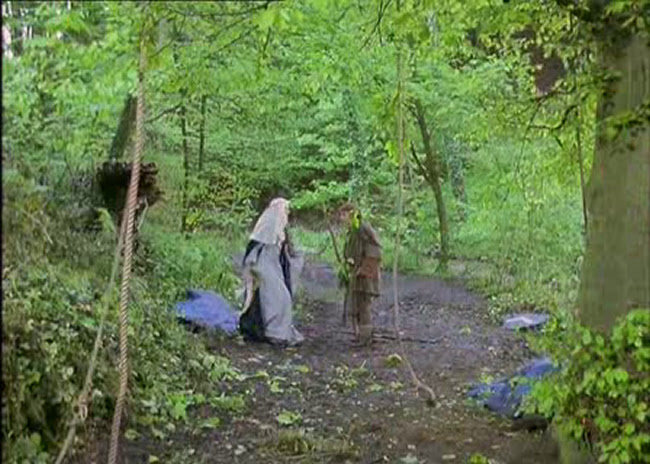 Where were these forests in Ridley Scott's film? Actually, Scott could've taken a lot of pages--let's say leaves--from Robin of Sherwood. Like the Merry Men in Robin of Sherwood are actually merry. And no, that doesn't make their situation seem less grim and desperate. There are some writers and artists who think people in miserable circumstances can only say and do miserable things. To those people I'd recommend Sullivan's Travels and Kurosawa's The Lower Depths. Or simply this quote from Frederick Douglass:

I have often been utterly astonished, since I came to the north, to find persons who could speak of the singing, among slaves, as evidence of their contentment and happiness. It is impossible to conceive of a greater mistake. Slaves sing most when they are most unhappy. The songs of the slave represent the sorrows of his heart; and he is relieved by them, only as an aching heart is relieved by its tears. At least, such is my experience. I have often sung to drown my sorrow, but seldom to express my happiness. Crying for joy, and singing for joy, were alike uncommon to me while in the jaws of slavery. The singing of a man cast away upon a desolate island might be as appropriately considered as evidence of contentment and happiness, as the singing of a slave; the songs of the one and of the other are prompted by the same emotion. 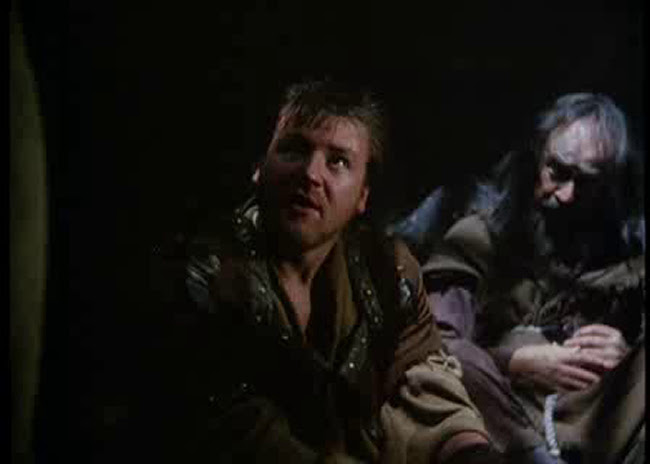 I particularly liked Ray Winstone as Will Scarlet who takes on his surname as an oath to repay blood for blood after his wife is raped and murdered. But he laughs and jokes with the others, pushing Robin into a river as a prank after his fight with Little John. 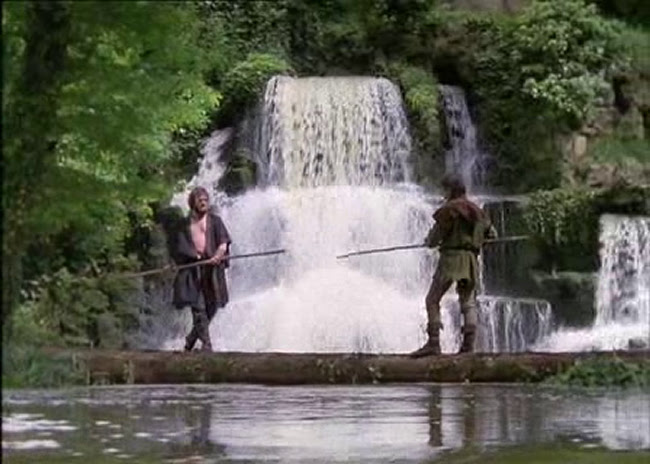 That fight is very similar to the one in the Flynn movie though the one between Flynn and Alan Hale as Little John has a lot more energy. The fight sequences in the 1938 film, particularly the final duel, remain the best of any Robin Hood I've seen.

Rather unexpectedly, Robin of Sherwood also features Herne the Hunter, or a man dressed as him, so of course I thought he was Falstaff at first. 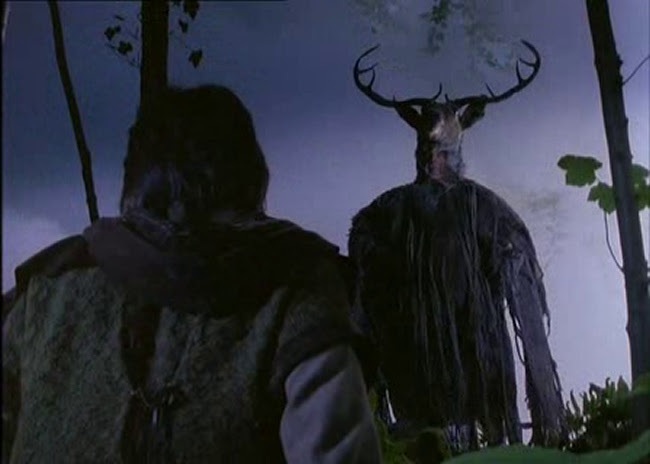 He seems to be Robin's spiritual advisor which I guess reinforces his identity as a Saxon against the Normans. Which also seems really 80s somehow, that pagan injection. It's another thing in the movie reminding me of Boorman's Excalibur or Ladyhawke or Ridley Scott's Legend--what happened to that Ridley Scott?--or any number of works of 80s fantasy fiction. All it needs a beautiful woman with cute, small lips and curly red hair--ah, Maid Marion (Judi Trott). 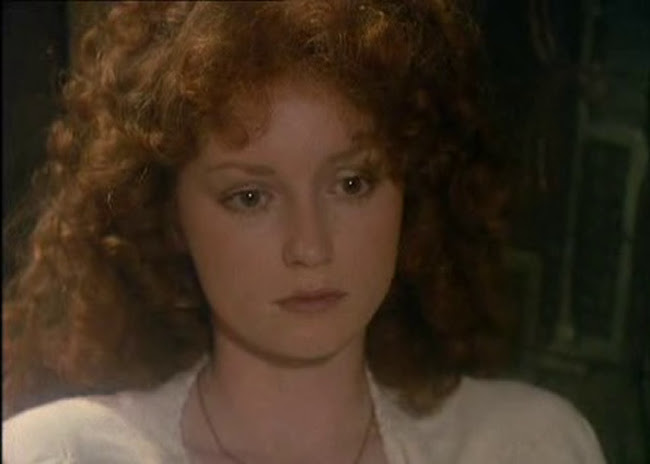