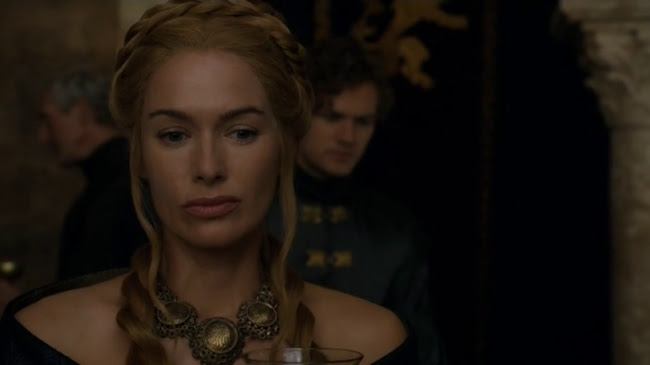 I guess the Sparrows are the Puritans and Cersei is Charles I on the new season of Game of Thrones. That's what it looks like from the first episode, anyway. But mostly, the absence that made my heart grow fonder of Game of Thrones ended with me being reminded of the show's shortcomings. Well, maybe not really shortcomings but ways in which the story clashes with my perspective on human nature. But Game of Thrones looks more like how history is usually written than how it's actually made--a series of rulers making decisions, making mistakes, being corrupt or valiant. It's a fantasy bound up in the idea that human beings can attain meaningful positions of power. Like a lot of fantasies, it's a lot of fun.

For an illustration of the alternative point of view, and the perspective I see as much more credible, I recommend reading War and Peace. Tolstoy portrays one of history's greatest political strong men, Napoleon Bonaparte, as being more the fortunate subject of a tide public perception and motivation than the orchestrator. The story wisely focuses on individuals who are affected by the events of war rather than individuals who effect events. I would stop harping on this issue the moment I felt like people weren't looking at Game of Thrones like an actual insightful look into the way nations are run.

Daenerys and Cersei look like they're going to have parallel plots this season about their ability to manage public perception and how crucial it is to the ability to rule--yes, we're seeing the two kingdoms of Sarah Connor this season. I'm rooting for the underdog, Cersei, not just because Lena Headey's the one who's still willing to get naked on camera. Though I was amused by a scene of Daenerys modestly covering her bosom after sex, the supposedly comfortable when nude Targaryen. 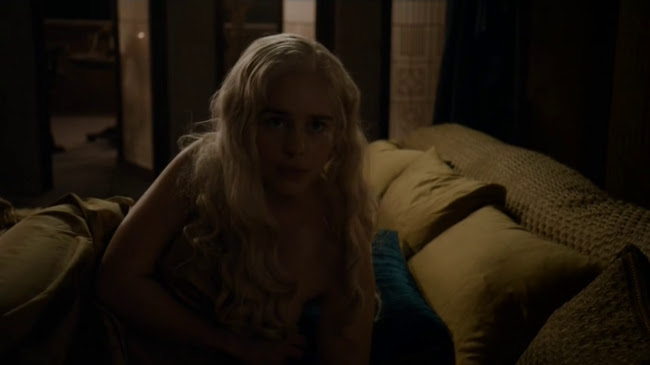 You can hear the makers of the show saying, "Look what you made us do!" Of course, Emilia Clarke didn't make them write the scene that way. I think it's a bit silly when actors think getting naked on camera is beneath their dignity but I don't see the point in pestering someone about, especially when you have to work with them.

I prefer Cersei because she's more interesting and played by a better actress. I'll take the woman who's lived with a prophesy of doom her whole life over the doe eyed queen of blue skies and virtue. Though her story with the dragons is a nice bit of moral complication for her.

I get the feeling sometimes that Tyrion is a manifestation of George R.R. Martin's self-image and that Daenerys is his unattainable dream woman while Cersei is a representation of the way he felt women regarded him as a young man. I wonder if that's why he's having such a hard time writing the next book--the closer he gets to Tyrion and Daenerys actually meeting, the more difficult he finds it to connect with.

Posted by Setsuled at 12:31 PM
Email ThisBlogThis!Share to TwitterShare to FacebookShare to Pinterest