The Filtered Portrait of Anne 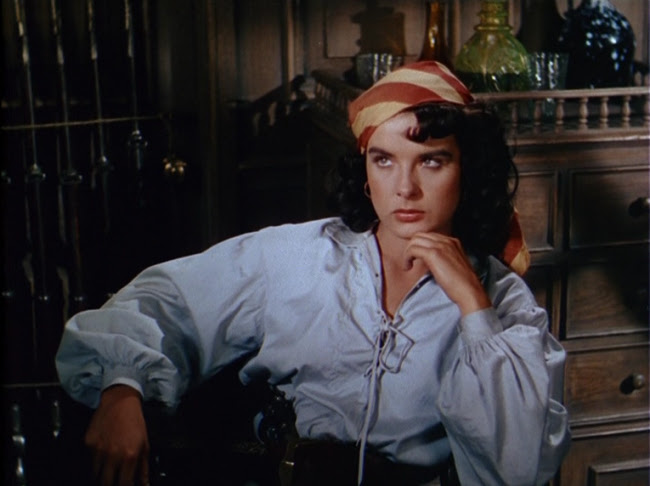 There were women pirates in the Golden Age of Piracy though little is known about any of them apart from Mary Read and Anne Bonny. A Jacques Tourneur movie very loosely based on the latter, Anne of the Indies, was released in 1951. Deviating so much from historical account was probably a good idea since Anne Bonny's story isn't particularly interesting apart from her being a woman though Anne of the Indies is flawed by what one senses is the result of multiple hands at the wheel, tyrannised by 1950s morality. Yet it is a fascinating film in part for that reason, though the beautiful colour footage under Tourneur's direction and Jean Peters' enthusiastic performance in the title role makes one wish the film were more fascinating for the reasons a filmmaker might desire than as an artefact of its time. 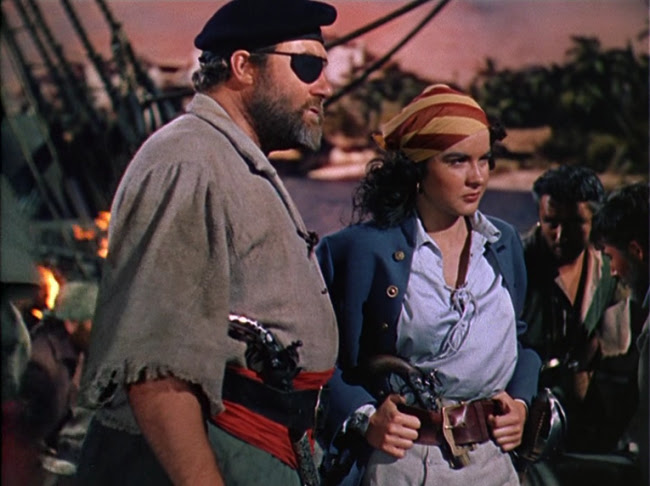 I haven't seen all her movies but I doubt I'll ever see one that cast Jean Peters better than Pickup On South Street where she played a prostitute named Candy. But as the pirate captain Anne Providence, she displays again her enthusiasm in pursuing roles considered too rough to be healthy to an actress' career. It's obvious from the too brief sword fights that she had trained hard for them. She's no Tyrone Power or Errol Flynn but she goes to it with as much gusto, even in a friendly tavern duel with her mentor, Blackbeard himself (Thomas Gomez). 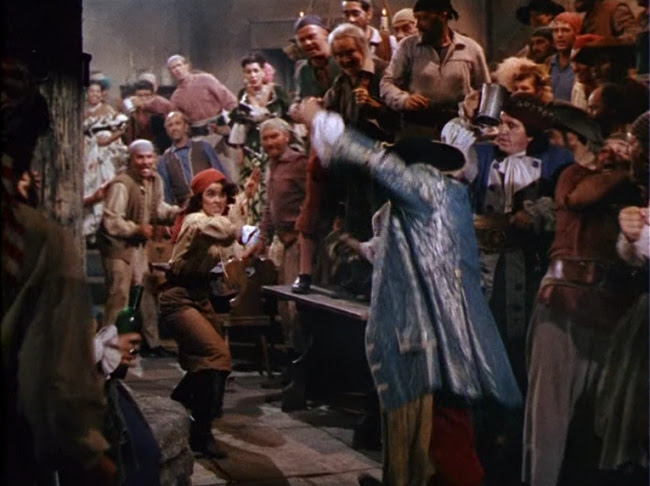 It's he that provided her crew and ship, the Queen Sheba. Her first mate, Red Dougal (James Robertson Justice), being charged personally by Blackbeard to see to Anne's safety. Nonetheless, she's clearly in command and is as happy as any of the crew to execute the British officers they capture as the film begins. However, she makes the risky decision to spare the handsome young Frenchman found in irons on the British ship, Pierre (Louis Jourdan). 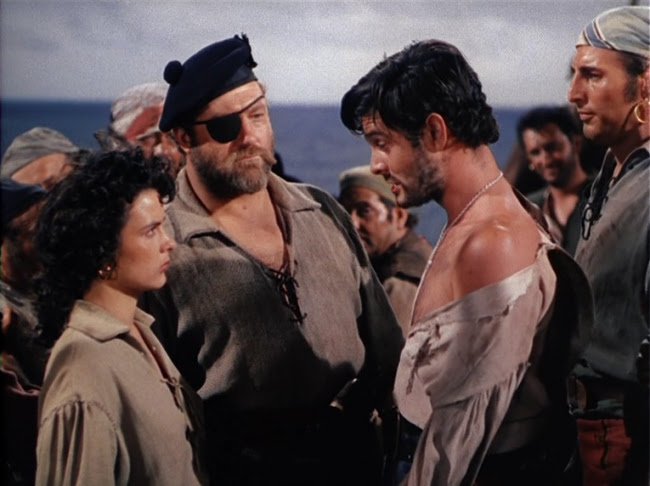 I often thought of Tourneur's great film Cat People. Both have noir qualities despite ostensibly belonging to other genres--one might say Simone Simon in Cat People and Jean Peters in Anne of the Indies are femmes fatale but I think that would come from only a superficial understanding of what a femme fatale is. Unlike, say, Barbara Stanwyck in Double Indemnity or Jane Greer in Tourneur's own Out of the Past, Cat People and Anne of the Indies are both told almost entirely from the point of view of the female characters and we know that their motives for committing their crimes are based on feelings provoked by very real injustices that were done to them. In these qualities, they actually have more in common with noir protagonists like Humphrey Bogart in High Sierra or Edward G. Robinson in Scarlet Street. I think one could argue that there is a homme fatale in Anne of the Indies.

Anne has a right to be angry. Her brother was executed for piracy by the British and we see her manipulated and betrayed like Simone Simon in Cat People--and, also like Cat People, the person who commits this betrayal is portrayed as innocent and heroic, it's up to the viewer to parse what actually happened. There's the sense of a morality that forbids women from feeling truly hurt by the unfaithfulness of men, or at least from wanting restitution. The place where Anne of the Indies falls apart in a way that Cat People truly doesn't is where Anne's pirate crew begin to disapprove of her ruthlessness, and mention is made of the depths of cruelty only a woman can exhibit when Anne simply tries to do normal pirate things like marooning enemies on an island or selling them into slavery. 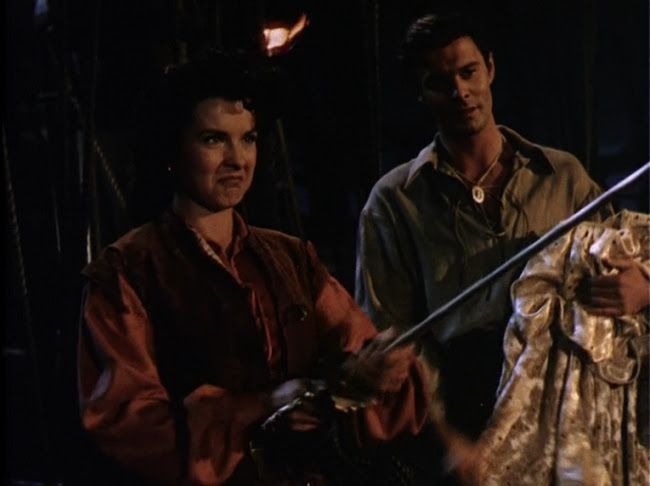 Also unlike Cat People, Anne has complete control over how ruthless she chooses to be. It would have been exciting to see her given full rein but the artificially enforced morality holds her back, partly in the person of her otherwise interesting ship's doctor, played by Herbert Marshall. Marshall lost his leg in World War I which you'd think would be a golden opportunity for a pirate film but he continues here to display his remarkable ability to make it look like he has two working legs. 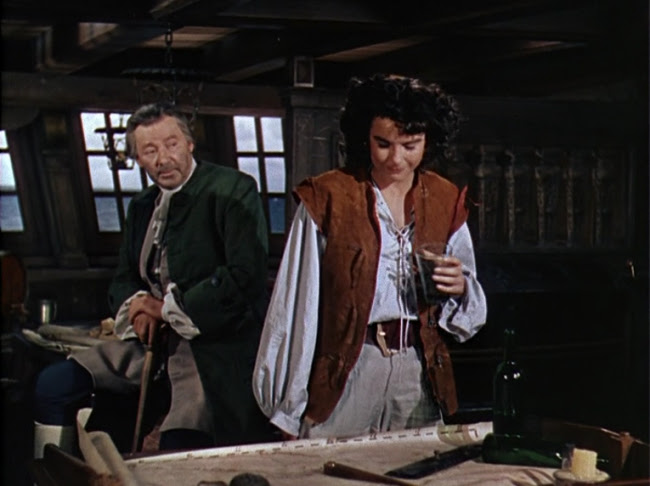 He gives the impression of an educated gentleman who's been beaten down by the world into a life of drinking and piracy. He has a gentle affection for Anne and I would have liked to have seen a film about the two of them terrorising the Caribbean unfettered by morality from two hundred years later. 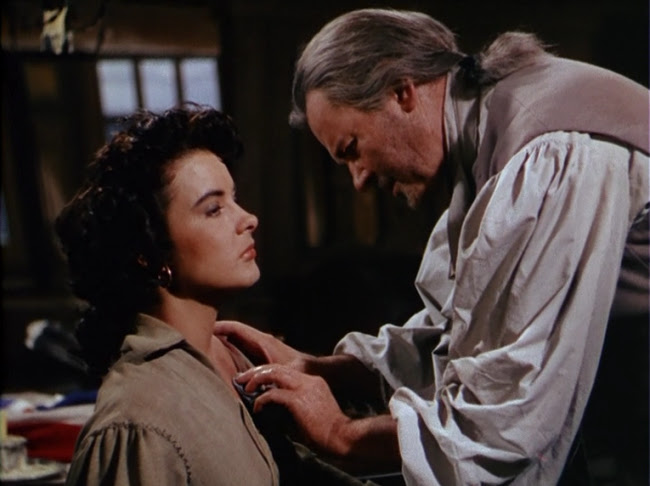