The Best Cherry Pie In the Tri-County 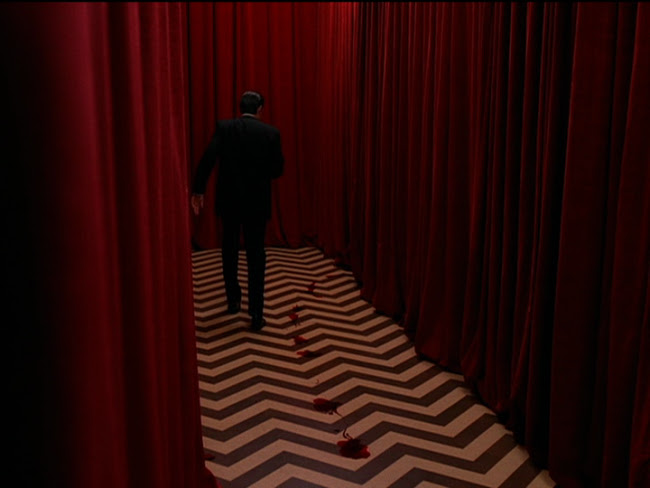 What is this other world where we are strange copies while remaining ourselves? The Black Lodge? Art? I found myself contemplating reflections as I finally finished watching through the Blu-Ray release of Twin Peaks I bought last year. In high school, I used to skip the big chunk of second season episodes where series co-creator David Lynch was away directing Wild at Heart, which I still think is a good way to watch the show, but a few years ago I watched through those Lynchless episodes, I suppose just out of hunger for more Twin Peaks after I'd run the Lynch era episodes into the ground. Really they're not so bad. Well, the plot about James being seduced by the woman with the rich husband still feels like a cheesy, early 90s HBO movie. Billy Zane's character is still incredibly annoying, Audrey turning into the dull, rote voice of virtue women are typically relegated to is depressing, Ben Horne thinking he's a Civil War general . . . I kind of like Windom Earle but he's also the cliche, flashy evil genius. Twin Peaks without David Lynch was pretty good, average television. Like average television, it lulls you into a sort of complacency and then David Lynch came back at the end like an avenging angel.

It's like your wife coming home after you've gradually grown comfortable with your favourite prostitute while she was away and just your wife's appearance reminds you of all the vows you'd not only made but really meant. Twin Peaks without David Lynch could be your average easy thrill, Twin Peaks with David Lynch is like true love. The ecstasy as well as the pain and frustration. 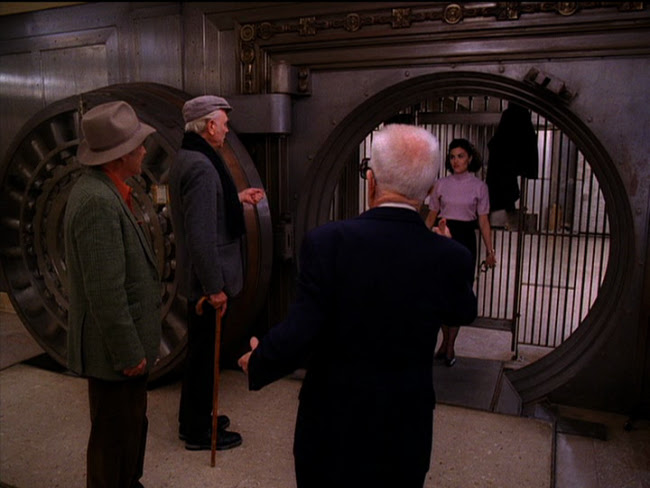 Oh, how I love that final episode. The bank scene is my favourite, I think. Lynch grabs the threads of Plotty Plotty Plots--Audrey and her father's environmental activism and Andrew Packard coming back from the dead--and just . . . puts them on a skillet and slowly burns them. He uses a slow moving, very old man to move everything along. I love how the revelation of Andrew's presence is unveiled in an unbroken, extreme long shot, like his whole stupid plot about faking his death is exactly what it is, a very small, insignificant thing in this cold bank, no more important than the security guy answering the phone to learn about his kid being born. 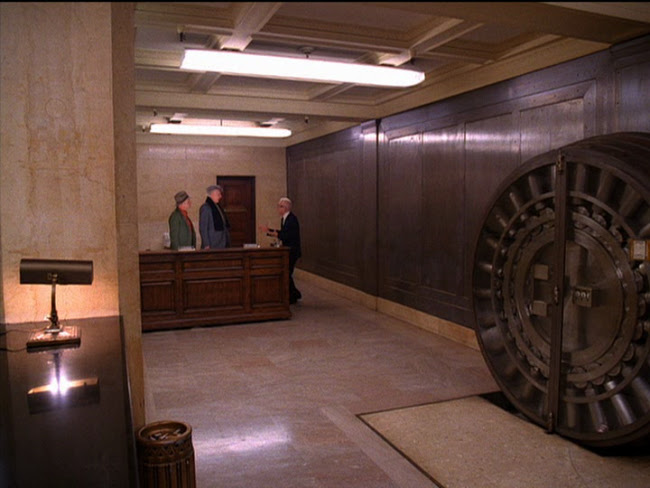 This encapsulates the difference between how Lynch handled the series and how the other directors did. It's not an equation for him, not a time tested pattern to be cut out and sewn together but a perspective and statement on reality. And this dumb formulaic thing was a lifeless body in his vision like a splinter which he attacks with white blood cells.

Vince Gilligan, writer, is the showrunner of Breaking Bad, Nic Pizzolatto, writer, is clearly in charge of True Detective. The directors seem to count for less and less. Many people have said--including David Lynch--that the creativity in filmmaking these days seems to be moving away from feature films and onto television. If that's the case, the medium would seem to be turning to a more literary one than a visual one. I imagine motion pictures are becoming closer to stage plays in that sense, a medium dominated by writers first, actors second, and then the director is important but mainly in how he or she allows the first two to shine unobstructed.

Of course, Lynch is a writer too and there have been many indications he did a lot of uncredited writing for Twin Peaks. He's said he wrote his own scenes when he appeared as Gordon Cole and actors in interviews have attested to how little what is on the page reflects what actually turns up on screen when Lynch directs, and that's certainly abundantly evident in the final episode of Twin Peaks for which Lynch does not have a writing credit. Lynch isn't simply a showrunner, he's an auteur, and I wonder if that's the crucial problem with his current falling out with Showtime.

I said before I thought maybe Lynch pulling out of next year's planned relaunch of Twin Peaks was cold feet. I still think that might be a possibility but more I think we might be seeing a kind of unwillingness to compromise a vision that is alien to this brave new world of television. Lynch loves the world of Twin Peaks but unlike Steven Spielberg with Kingdom of the Crystal Skull he's uninterested in delivering a weak echo, a prestigious encore. His focus is, as it always has been, whether he consciously likes it or not, on using the medium for a more profound and honest expression. That's my current theory.