Here we are again at another Doctor Who Saturday and we visit Project: Lazarus, a 2003 audio play which continues the mutilated Doctor theme. It's also a sequel to Project: Twilight, a Sixth Doctor story about Sci-Fi vampires, apparently unrelated to the ones in State of Decay or "The Vampires of Venice" or The Curse of Fenric or any of the other vampires established on the series. I liked Project: Lazarus a lot more than Project: Twilight, though.

It's both a Sixth Doctor story and a Seventh Doctor story, an idea I really liked--the story concludes in the middle and then a new story begins where the Seventh Doctor, much later, visits the same time and place only to find what appears to be his sixth incarnation still there. Colin Baker does a teasing impression of Sylvester McCoy that actually made me smile.

Let's see, what else can I say about Doctor Who. I rewatched the Fifth Doctor story Time Flight and the Twelfth Doctor episode "Into the Dalek". The former confirmed for me that the Fifth's audio plays are much better written than his television episodes and I was reminded how tired I got of seeing the Master in the Five and Six era. "Into the Dalek" holds up pretty well though I still wish the Dalek hadn't said that stuff about divinity.

Have I mentioned Twelve is my favourite Doctor of the new series? It's not even a contest, I love him so much. 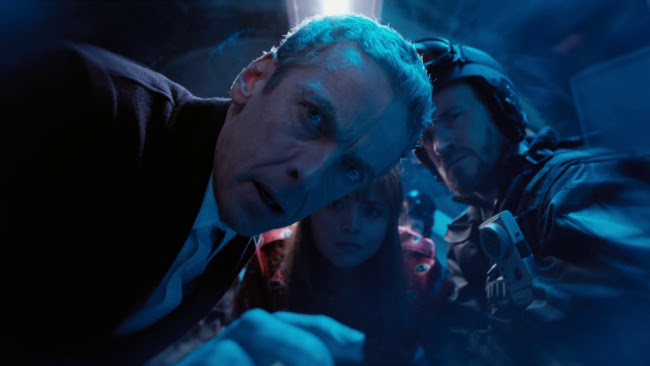 I dreamt last night I was visiting Caitlin and she was showing me a large bag of keepsakes while we watched television. To get the bag, she'd had to go into a small room under the stairs. I heard a scuffle and screaming. In the bag were VHS tapes and some kind of crude objects made of twigs painted black and tied with twine.

I also had a dream about someone breaking into a room I had in the sky and moving some things from an upstairs closet to a downstairs kitchen table.

Posted by Setsuled at 2:13 PM
Email ThisBlogThis!Share to TwitterShare to FacebookShare to Pinterest