Disney's decision to wipe out the old Star Wars Expanded Universe and make all their new Star Wars releases officially canon seems increasingly unwise. This past week I read the first volumes in three of their Star Wars comics releases through Marvel--Star Wars #1, Darth Vader #1, and Princess Leia #1. The Darth Vader comic was the best, following Vader on a visit to Jabba the Hutt that amusingly contrasts with Luke's visit in Return of the Jedi. Instead of using a mind trick to move the Gamorrean guards, Vader simple kills them both. And things proceed from there as you might imagine. There's also the sense of Vader and his relationship from the emperor following organically from the events of Revenge of the Sith which I like a lot. Vader not so much as the flat villain of A New Hope or as the vaguely struggling old man in Return of the Jedi but as the confused and angry man in Empire Strikes Back and Revenge of the Sith whose friendship with the Emperor isn't so heartfelt, more opportunism based on dearly held, uncertain philosophical goals.

The art isn't very good, making Vader look weirdly tiny and giving him a scrawny neck. But it's better than the art in the other two comics. Princess Leia is done in the American faux manga style with the usual invisible basketball palming or invisible basketball dribbling as in this panel: 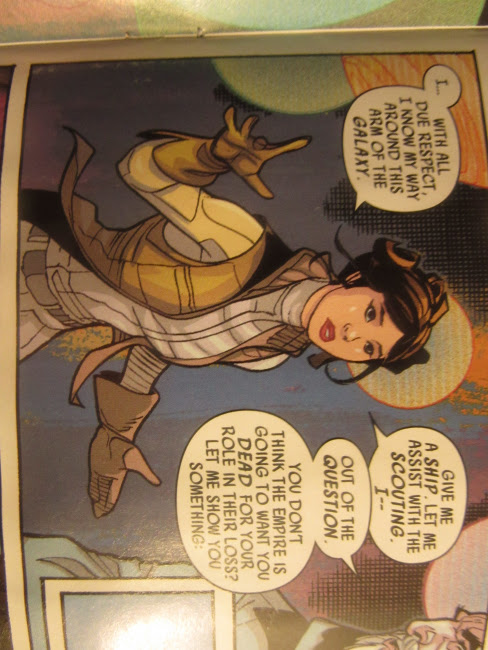 Can you imagine Carrie Fisher--or anyone--using a gesture like that in conversation?

Princess Leia #1 makes maybe the riskiest addition to canon in that it begins exactly where A New Hope ends, at the awards ceremony. Conversation immediately, awkwardly turns to evacuation and the plot becomes one of Leia trying to talk people into allowing her to go out in a ship and help scout. She eventually has to sneak away with a helpful female Alderaanian X-Wing pilot to look for survivors from Alderaan though Luke and Wedge try to block their ship from entering hyperspace. There's a really forced subtext of boys versus girls. Does anything about the end of New Hope suggest to you Luke's up for adhering to weirdly tyrannical Rebel Alliance protocols before siding with Princess Leia?

Star Wars #1 spends the whole issue stretching about four pages of content as we watch Han, Leia, and Luke infiltrate an Imperial base. The art is especially bad, a single minded dedication to making the characters look like the actors almost entirely robs them of natural facial expressions. It comes off like The Adventure of the Cinema Lobby Cut-outs. Dialogue feels wrong--would Threepio refer to Han's ship as simply "The Falcon"?--and the sense of action is stifled by the stiff caricatures.

I paused on this panel 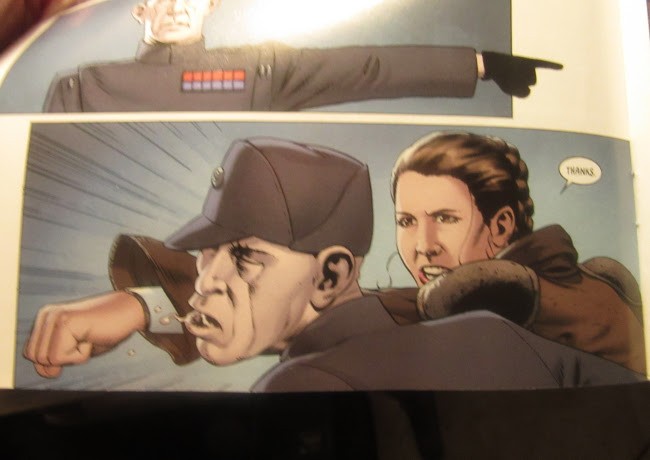 and thought, "Why does this look so familiar?" I realised I'd just seen it recently in Batgirl #40. And even then it'd looked familiar. I've seen it in at least three or four other comics--and I don't read a lot of comics. I think it's time to retire this one, fellas. I doubt I'm the first one to notice this stock panel--does it have a name? If no-one else has named it yet, I want to call it the "Ooou Punch".

Of course, none of us actually has to consider this stuff canon just because Disney says so. As much as I do like the idea of a wide shared universe there's no reason I should have to accept mediocrity. I feel like I'm in conflict with Disney just by saying that, though. Which reveals the beauty of the old Expanded Universe--the canonicity was vague, Lucas would borrow elements he liked and just keep mum on whether the rest was "official". It was the best of both worlds, it was a huge expanded universe and there was no pressure to take everything as gospel.

Speaking of the wisely implemented vague canonicity, I listened to two Doctor Who audio plays this past week, the not as bad as you'd think but still not great Doctor Who and the Pirates and the pretty good subversion Creatures of Beauty, both from 2003.

Doctor Who and the Pirates really feels like something badly improvised as ideas that seem like they're going to lead somewhere are completely abandoned and the well meaning ending about grieving comes off a bit trite.

Creatures of Beauty, written surprisingly by Nicholas Briggs whose writing I normally dislike, is a Fifth Doctor story in which he and Nyssa visit a planet where the population is dying and has been made horribly disfigured by atmospheric pollution. It's a grim subversion of several standard Doctor Who story elements--the idea that the Doctor can always help wherever he goes, that he and his companion can always find a way to escape, that everywhere they go there are clear Good Guys and Bad Guys. Every single one of these things is turned on its head and it's pretty satisfying. It's the sort of story I like to imagine happens pretty often in between the stories we actually see.

Posted by Setsuled at 4:13 PM
Email ThisBlogThis!Share to TwitterShare to FacebookShare to Pinterest