The Fearful Symmetry of Newborn Eyes 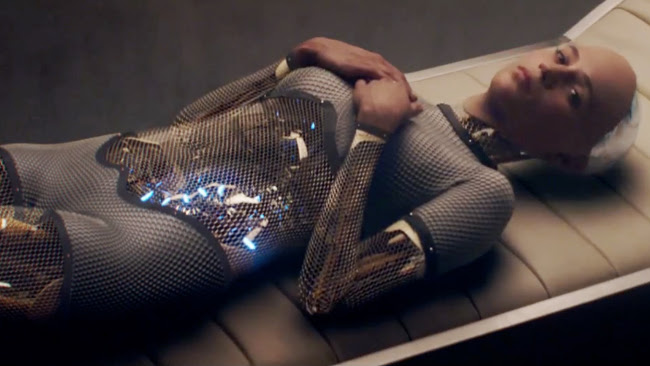 What are innocence and sin without the context of religion or morality? Perhaps an android and a human? Why would someone take the trouble of building a perfect, complex artificial intelligence and then treat it like a disposable object? Might as well ask why someone marries only to eventually treat their spouse like a detested servant. It's senseless and it's human. 2015's Ex Machina is the latest of a long history of films to explore the relationship between android and human. Indeed, the story of a person's relationship with the human facsimile he or she (but usually he) has created is far from new. It's as old as Galatea though Ex Machina bears more resemblance to Blade Runner and to various anime and manga series. But like all stories that are endlessly retold, it has a bottomless well of resonance and, along with amazing visuals and performances, it makes Ex Machina a very nice, intelligent film.

The movie spends a lot of time out-thinking its audience, anticipating expectations people have on familiar directions the story might take--whether the androids will be evil, whether the humans will be irresponsible and cruel, whether some characters we've taken as human might end up having been androids all along. But writer and director Alex Garland seems wisely to inhabit the story rather than produce it from equation. In fact, the film has several enormous plot holes, though only a couple of them really bugged me, chiefly that Caleb (Domhnall Gleeson) never thinks to ask Nathan (Oscar Isaac) why he has to speak to the android, Ava (Alicia Vikander), through a glass wall and he fails to ask why there's a fist sized crack in the glass. Caleb is there to conduct a "Turing Test", a test designed to determine whether an AI is genuinely, independently thinking and feeling or if it's simply simulating human behaviour. If the android poses a physical threat, it seems like it would have some bearing on that question.

Nathan is the owner and mastermind of a fictional online media company called Bluebook which sounds like it's a combination of Facebook and Google. He developed his artificial intelligence in secret and has now brought in Caleb, a nicely realistic character, to test the results. Caleb is not physically attractive, we gather he hasn't had a lot of luck with women--he's a coder for Nathan's company, one of the best. I won't spoil how things turn out precisely but I'll say even early on I noticed that Nathan had made his android in the image of a beautiful woman.

As I pointed out at the beginning, the android creator is often shown to have motives that seem to be contradictory. I suspect the reason audiences to tend to more often sympathise with android characters like Data from Star Trek: The Next Generation, Chi from Chobits, the Terminator, or the androids in the recent Swedish television series Real Humans is that these newborn artificial species are pure. Looking at them, one can see a definition of innocence in an intelligence that lacks years of accumulated shame based on the hypocrisy seemingly inevitable for human beings to function throughout their lives while claiming to maintain ideals they were taught in youth. How does Roy in Blade Runner earn that not exactly subtle image of his hand, pierced by a nail, saving Deckard from the ledge? He may have murdered people but he never did so having had the express intention of bringing them into existence to begin with. Even though he's a killer, he's pure and, for having been treated as an outsider by human morality, an innocent.

Alicia Vikander has been justly praised for her performance as Ava. As Richard Roeper said, "Alicia Vikander infuses Ava with the just the right mixture of iciness, vulnerability and mystery." Despite all her android forebears, the character Ava most reminded me of was Rei Ayanami from Neon Genesis Evangelion, a character that resonated so well in Japan she's become a character type, many series of every genre have had this beautiful girl with her mix of ice, vulnerability, and mystery, a kind of doll who is both attractive for her youthful beauty and accessibility but also haunting for her coolness and pragmatism--even as those latter two seem to be manifestations of the same innocence that produces the first two.

Posted by Setsuled at 7:23 PM
Email ThisBlogThis!Share to TwitterShare to FacebookShare to Pinterest