You Think These Thrones are a Game?

Well, we finally had to break the reverie from that wonderful finale for Arya last season and see her actually arrive in Braavos. But Arya's scenes were good in last night's episode, I liked getting a look at the peasantry, for once, about their business at the docks. It would be interesting to see an alternate cut of Game of Thrones where all the snippets of story we see in every episode are strung together. Really, how much more did we see last night than Arya knocking on a door?

I loved Brienne's action scene. I liked the stuff with Sansa and Littlefinger but Sansa's makeover is feeling really silly. When she stepped out with new dark hair and clothes it seems like everyone thought she was suddenly going to be a master manipulator. Of course it takes more than dye for that but Sophie Turner injecting a bitter, resentful tone to everything she says now to make up for the fact that it's still Littlefinger doing all the planning and scheming feels like watching a little kid pretending to be the Wicked Witch on Halloween.

I thought the Daenerys story was extraordinarily dumb. I don't usually like giving spoilers in these entries but I have to talk about how fucking stupid that was so--spoilers after the tired and incredulous Arya. 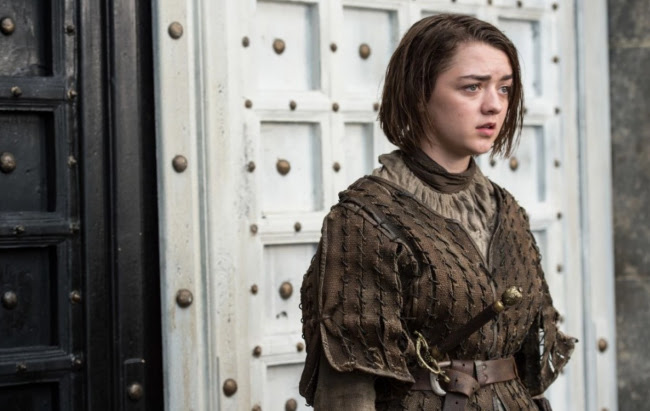 Do you execute someone without trial for executing someone without trial? No, that would be too self-evidently stupid, no-one could possibly carry out that action without being overburdened by the massive weight of obvious irony. Oh, but that's exactly what happened last night. Or was Daenerys questioning the guy in the throne room supposed to be his trial? If that's the case, why all the hand wringing about having a trial for the first guy? Now everyone in the city hates her which she and all of her advisers should have seen as inevitable as noon but none of them do. This is really the same show that has Tyrion and Varys and their wonderfully witty exchanges of glum observations and optimism tempered in battery acid?

But speaking of spoilers, spoilers I'm keeping myself from, I only learned yesterday that something like five episodes of this season were leaked a week ago. Cue various internet magazines seething at not having the privilege of spoiling the show for people who DVRed it every week. Though I'm not above piracy--particularly not of TV shows where I don't see the real difference between watching my HBO subscribing parents' or sister's recording of the show and some anonymous person's--I don't see it as a black and white issue. I wouldn't, for example, refrain from paying for a book or independent film unless it was in the public domain and the creators are long dead. But moral issues aside, I don't find myself at all compelled to watch the leaked Game of Thrones episodes before they air. Maybe it's because I'm one of the few people who doesn't binge watch. I don't think it's wrong to like binge watching television shows. I think some shows are made for it and people argue Game of Thrones is one of them. Maybe I'd like it too if I had the vast amounts of free time everyone else seems to have. I mean, really, how come I don't have five hours to spend regularly watching television in one go? I'm really structuring my life wrong, I guess.

I almost wonder, though, if the leak was perpetrated by someone at HBO. Considering that people at HBO have been quoted as seeing the piracy of the series as almost a good thing, I wonder if this was to covertly test the waters at potentially releasing the show in bushels like Netflix does.

Posted by Setsuled at 11:21 AM
Email ThisBlogThis!Share to TwitterShare to FacebookShare to Pinterest