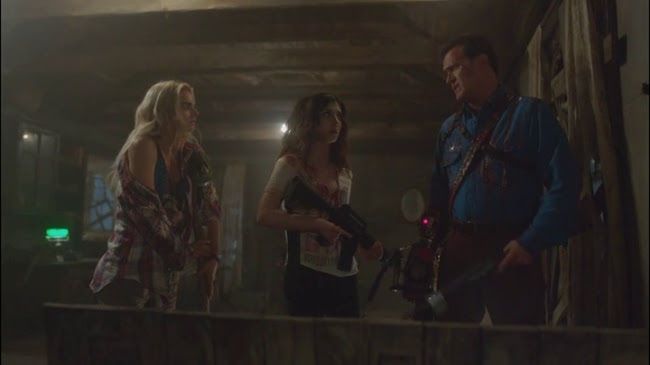 So we finally have an episode of Ash vs. Evil Dead written by the so-called "showrunner" Craig Digregorio and it's the last episode of the season. And the writing is by far the weakest point, director Rick Jacobson makes the episode largely work but he couldn't do much with Kelly's continually stupid, "He's not my boyfriend!" gag or the predictable fate of Heather the Hiker. David Lynch is directing and co-writing every episode of the new Twin Peaks, why the hell couldn't Sam Raimi have done same thing? Maybe next season he will. Or maybe at least put someone in the position who has a Wikipedia entry. 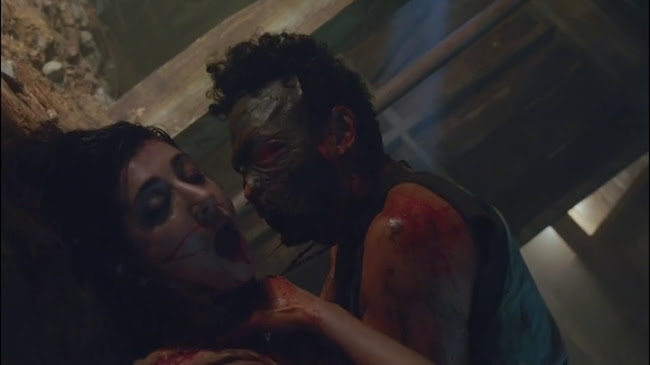 But as I said, Rick Jacobson did a nice job. The huge eyeball in the wall was nice--I love the feeling that the Evil is so much weirder and unpredictable than just zombies. The kids popping out of the dark was also great, especially the one with the flashlight. 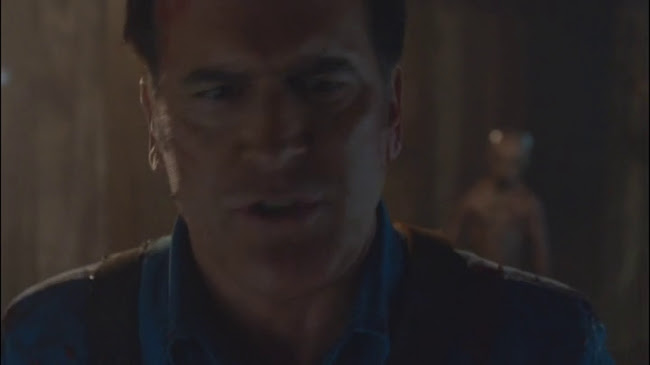 Anyway, it's been a few days so I guess it's time for me to talk about Star Wars again, this time I want to call out the lazy assholes who've been taking George Lucas to task over comparing Disney to "white slavers". None of the articles screaming "Naughty, wicked, George!" actually mention the context of the quote which if you fucking watch the full Charlie Rose interview was clearly not said in seriousness and was Lucas playing off Charlie Rose's rather pushy analogy to selling children. Rose pushing, "They're your kids. You sold them." Instead of following Rose's invitation to be maudlin--though Lucas sounds bitter enough through most of the interview--he takes it to the absurd extreme. When you sell people, what do you do? You sell them to slavers. Lucas was clearly trying to diffuse the wedge Rose was trying to illuminate between Lucas and Disney by making it look stupid. The problem is, it's just not stupid--no matter how Lucas tries to gloss it, he's still clearly not happy with The Force Awakens. No matter how many nice things he says about J.J. Abrams and Kathleen Kennedy he never directly says, "Force Awakens is a good movie."

Whatever you might say about the superiority of Force Awakens compared to the prequels, looking at this man who sold the defining creative undertaking of his career and now is in full King Lear mode I can't help feeling really bad for him. How patronising was that comment from Bob Iger about how Lucas' treatments for episodes VII through IX having "potential"? Surely the old man also doesn't need his retinue of knights. To those who'd point out the billions of dollars Lucas got out of the deal, I would quote Paradise Lost: "Let none admire that riches grow in Hell; that soil may best deserve the precious bane."

Money was clearly on Lucas' mind. He talks about how his projects were losing money and how he was concerned for the many employees working at Lucasfilm. Part of him justifies his stepping out of the picture by saying he was no longer good for the company. Part of it is him wanting to concentrate on family and smaller projects. He starts the interview off talking about how people shouldn't underrate popular entertainment because that's what really matters and then he talks about consigning himself to unpopular entertainment. He's full of contradictory justifications and rationalisations, the kind of thing you'd expect from someone who's growing more and more aware he's made a mistake too big to acknowledge to himself, or maybe he can't acknowledge it because what hurts him personally he still sees as being beneficial to everyone else.

I have to say, if the idea of selling Lucasfilm came from someone else and it was put into Lucas' head, I would say that person is definitely not his friend.