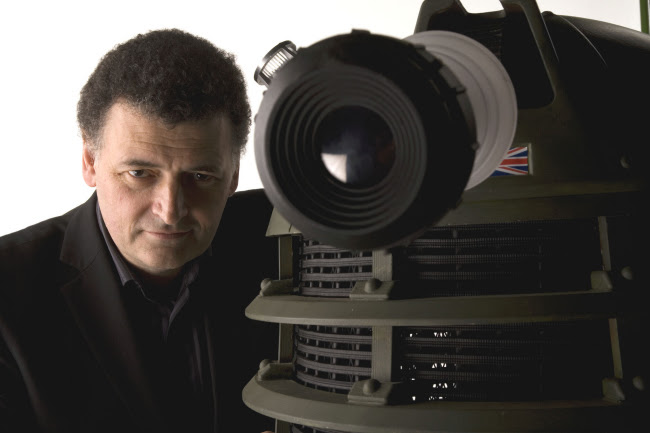 There was big news in Doctor Who yesterday with the announcement that Steven Moffat is leaving the show after the upcoming season. Moffat has been showrunner since taking over from Russell T. Davies in 2010, he'll be replaced by Chris Chibnall after 2017.

It feels time, to me, Moffat's work has felt increasingly stretched thin. It makes Peter Capaldi leaving the show seem more probable--though it already seemed likely because Capaldi is an actor with a lot of other opportunities for projects and, of course, there's the "Troughton Rule". Patrick Troughton, who played the Second Doctor, made a conscious decision to stay for only three seasons and since then three seasons has been kind of the standard number. Peter Davison left after three seasons consciously following Troughton's example, Sylvester McCoy ended up having only three seasons, though I suspect he'd have stayed longer if he'd had a choice, when the show was cancelled in 1989. Both David Tennant and Matt Smith had three seasons though Tennant did so many specials he practically had a fourth.

Moffat has said more than once recently that he feels the next Doctor ought to be a woman and his past couple of seasons have featured many strong hints that he wants this to be the case. I wonder if the higher ups at the BBC unequivocally forbade this and Moffat is leaving under protest. It would be hard to imagine him leaving if the opportunity to write the first female Doctor was coming up.

I'm told Moffat's replacement, Chris Chibnall, wrote very bad episodes of Torchwood, the Doctor Who spin-off. I've never seen Torchwood so I can only judge by Chibnall's Doctor Who episodes and from the writing on Broadchurch, the detective series Chibnall created and wrote or co-wrote every episode for. I liked Broadchurch. Very obviously influenced by Twin Peaks it did a better job of exploring the sense of personal grief and horror in the pilot episode of Twin Peaks than other Twin Peaks imitators have done. Later episodes of Broadchurch weren't quite as strong but I never thought the show was thoroughly bad.

Chibnall's first episode of Doctor Who was the Tenth Doctor episode "42" which I thought was one of the more solid episodes of the Davies era. I didn't mind Chibnall's Silurian two-parter in the Eleventh Doctor's first season, his episodes in Amy and Rory's final season were pretty lacklustre but I wonder how much that has to do with general Amy and Rory fatigue.

It is a contrast to Moffat's early episodes from before he was showrunner which deservedly have reputations as some of the best episodes of the series, particularly "Blink". But who has had a comparable impact? Maybe Neil Gaiman but Gaiman obviously has plenty on his plate. Anyway, I'm willing to keep an open mind for Chibnall.

Posted by Setsuled at 12:38 PM
Email ThisBlogThis!Share to TwitterShare to FacebookShare to Pinterest